51 Individual elections in one 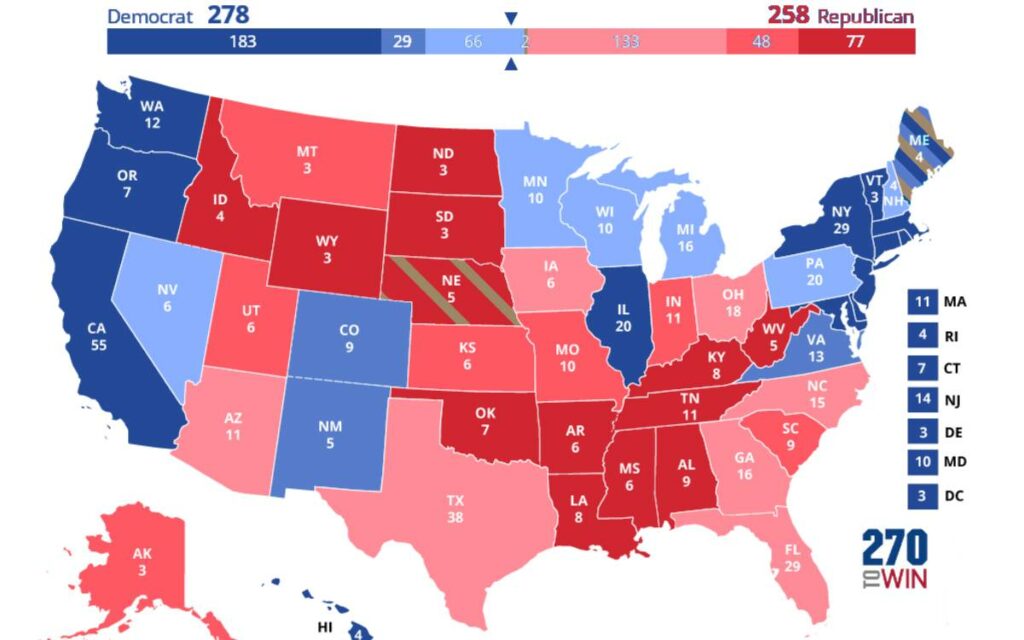 Every four years Canadians – and many others around the world I suspect – wonder out loud how much quicker U.S. elections would go if those doing the count were allowed to remove their shoes and socks.

This way you see, in most cases they could count up to 20.

While we may joke and make rationalizations on why these vote counts seem interminably long, the issue isn’t the counts at all. The real issue seems to be rooted in the U.S. Constitution a document every American swears is a solemn document and must be upheld to it’s full.

The 12th amendment of the U.S. Constitution established the Electoral College system. This system for electing the President and Vice-President assigning values to each state and the District of Columbia.

Nebraska and Maine, just to be different I assume, also have an additional single Electoral College vote.

Now because of this process U.S. voters don’t actually vote for the president. They vote in fact for an elector in the college and that elector is assigned to then vote for one guy or the other – apologies to Hillary Clinton but it’s mostly guys at the top of the ticket.

Now because each Electoral College vote is assigned to a specific state or DC the nature of U.S. elections for those who work in Washington – the District not the much better State – are therefore state elections.

That’s right, there is no such thing as a Federal Election in the U.S. just 50 individual state elections and D.C. Now because of this each state gets to determine how each election, voting and the counting of votes are done.

The rationale behind this is smaller states need to have representation and the Electoral College is the best way to do that.

If you are following at home and thinking that this sounds like how Canadians elect a Prime Minister, you’d be right. We vote for members and those members who are in the majority of a single party get to have their leader be prime minister.

The difference is in Canada we have federal elections and therefore we have one election law for the entire country. In the U.S. each state gets to decide.

This is where issues like Jim Crow laws came from. These abhorrent laws were created to shut out black voters largely created by southern Democrat run legislatures in the late 19th and early 20th centuries.

Yes Democrats, though of the southern kind, created laws including testing the intelligence of voters.

Now this was more “intelligence” in the classical form – could a voter read for example – a skill not common with newly freed African Americans. The Civil War had just ended and the losing side used any means necessary of suppression.

For those old enough to remember the film Mississippi Burning you will recall there were other, more violent, ways voters have been suppressed. Remnants of those laws still reverberate throughout the U.S. today though the tactics are now said to be performed mostly by Republicans.

The Jim Crow laws were allowed because states decided on them. If Canada allowed provinces to decide federal election laws I have no doubt that separatist Rene Levesque, former Premier of Quebec, would have required French tests for anyone trying to vote.

Voter suppression by the way is not the same as questioning the validity of mail in ballots and wanting scrutineering of those ballots. Yes I agree every vote should be counted, but every vote should also be scrutinized including signatures for either mail-in or in-person voting.

It is not clear from the news the last few days whether that is happening. I have scrutinized several elections in my time and I have seen voter fraud on multiple occasions either intentional or by accident. That is why members of all candidates’ election teams must be able to view the ballots and the voting process – all the ballots.

I am sure that last point will have some accusing me of being a supporter of Donald Trump. I am not, I don’t care for Joe Biden either, but as I keep saying, not my monkey, not my zoo.

So how do you fix this? Well how about harmonized election laws across the U.S. so every state has to follow the same rules? And then create an election oversight board with an equal number of members from each party – the U.S. only has two remember – then make the U.S. Supreme Court the final arbiter of elections laws for electing members of the federal government.

Now my U.S. friends will point out the reasons for the Electoral College and how the idea of a truly Federal Election would trample state’s rights. The false argument that smaller states would not be represented would be made and the idea the voting needs to reflect individual state demographics would also be made.

Basically, Florida needs certain voting laws because of the number of seniors. This too would be a false argument because it would mean a senior in Florida would have greater access to the franchise than one in another state – basically an inequity.

Mainly the argument would be that it’s part of the constitution, envisioned by the framers and therefore it’s simply the way it is. Or for the more aggressive, you can’t change the constitution.

There are 27 amendments to the U.S. constitution by the way. Oxford defines Amendment as “a minor change or addition designed to improve a text, piece of legislation, etc.”

So in those specific cases at least, the U.S. Constitution as originally crafted and envisioned was proved to be wrong or at least not fit with modern realities.

Letting each state decide individually how a person votes and how those votes are to be counted when everyone is supposed to be equal? Well, it’s not how I would envision doing it.