90 Minutes to Clear should be standard for Ontario roads 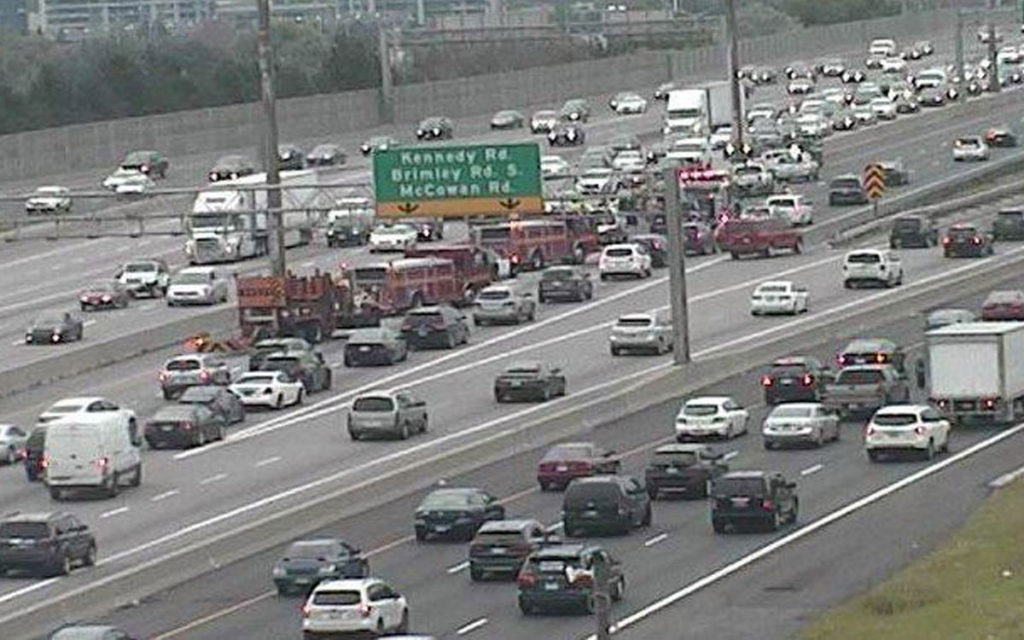 Thursday morning, a major collision closed all eastbound lanes of Highway 401 near Winston Churchill around for over four hours. There were no major injuries but, in the hours the highway was closed, a massive traffic jam formed and it, in turn, caused an even worse smash-up. The secondary accident critically injured more drivers and took another three and half hours to clear. But, that wasn’t the end of it. A number of other crashes occurred all along the 401 as the lengthy closures and traffic jams caused traffic chaos everywhere.

Highway accidents and the lengthy road closures that follow them put additional lives at risk and cost Ontario’s economy billions of dollars every year. People are hurt in secondary accidents caused by road closures. Ambulances and emergency services are delayed en route to unrelated emergencies and while transporting critically-ill patients to hospital.

People and critical goods are delayed arriving at work and factories, resulting in costly lost productivity. The City of Toronto estimated in 2014 that traffic congestion cost commuters $3.3 billion and the economy in Toronto $2.7 billion annually. A significant portion of that $6 billion cost is attributable to the time our highways remain closed after accidents.

It’s not unusual for Ontario highways to remain closed for hours after even relatively minor collisions. In 2017, the express lanes of Highway 401 westbound were closed for 13 hours after a single-truck crash that injured no one, caused no major damage and resulted in no charges. In January, a one-vehicle crash produced a minor injury and closed the 401 near Prescott for 24 hours. On April 16, two trucks crashed on Highway 400 near Barrie. There were no major injuries, but the highway was closed in both directions for 11 hours.

On March 29, a multi-car collision closed the Don Valley Parkway in Toronto during morning rush hour. There were no serious injuries, but it still took more than three hours to clear the highway – in part, because police waited for owners of an over-turned cargo van to bring in another truck and crew to transfer the crashed truck’s cargo in order to minimize damage to the first vehicle and its load. While the company mitigated its losses, thousands of drivers waited and Toronto’s economy was put on pause.

Why does it take so long? Mostly, because police are in charge no one has ever asked them to work faster. Currently, there is no mandate for Ontario police services to even consider how long it’s taking when managing an accident scene. So, they don’t.

It doesn’t have to be this way

Ridiculously long highway closures simply don’t happen in many other North American jurisdictions. Florida, for example, adopted an Open Roads Policy in 2002 that requires police, fire, ambulance, the transportation department and private recovery contractors to work together with an explicit goal to clear the accident scene and reopen affected lanes within 90 minutes of the first responder arriving on scene.

As a result, Florida police revised their protocols to make accident investigations faster. The transportation department has pre-contracted qualified and fully-equipped tow and recovery operators to manage all vehicle and accident debris clearance in assigned highway zones. They only get paid when they’re called out and only if they do the job within 90 minutes. If not, they don’t get paid. If they do it faster, they earn a bonus.

It’s affordable. And, it works.

There is no reason a similar policy won’t work in Ontario. In fact, something similar was tested during the 2015 Pan-Am Games and it seemed to work well. A group recently formed to encourage government to adopt a Florida-style “90 Minutes to Clear” policy for Ontario’s major highways. Using the hashtag #90MinutestoClear on social media, they’ve launched a web presence at 90MinutestoClear.org and a petition on Change.org. If you agree we can do better, I encourage you to support the cause and demand better from your local MPP candidates in June.