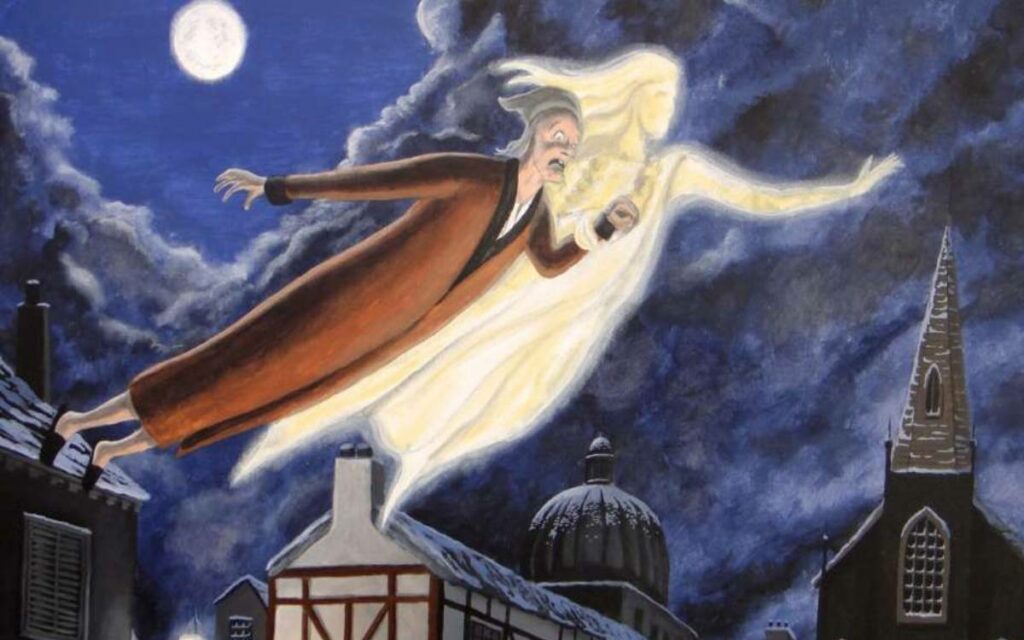 With apologies to Charles Dickens and the wondrous legacy of The Christmas Carol, here is a modern day story of the spirit Jacob Marley, who last evening visited a weary Canadian — a cynical soul who has lost all hope for his nation and its promise. As Marley successfully illuminated the crevices of EbenezerScrooge’s heart of stone, he appears this Christmas Eve to forewarn our Canadian (let’s call him Canuck) that there needs to be a spiritual reawakening to appreciate and ensure all that is possible for Canada. Marley tells Canuck he is to be visited by three apparitions…

As the story goes, the Ghost of Christmas Past ferried Canuck back to 1890, to a snowy December night in Kingston, Ontario. There he came face-to-face with John A. Macdonald sitting in front of a fireplace with a blanket pulled up over his 75–year old frame. Macdonald was preoccupied writing campaign notes. Early in the new year he is planning to lead his Conservatives into an election with the cry of “The Old Flag. The Old Policy. The Old Leader.” The PM seems as determined as ever that his National Policy will ensure the young country will survive the ambitions of American politicians and businessmen.

Canuck is fascinated by the elder figure hunched over, absorbed in his work. Indeed, Macdonald had won five majority governments for the Conservative Party and by all accounts had realized his remarkable dream of a united Dominion from sea to sea. It was he who advanced the scheme of a confederation in the decade leading up to 1864; who became Canada’s first prime minister; and who forged a national conscience by laying down a ribbon of steel and demanding a steadfast loyalty to Westminster democracy.

Macdonald was responsible for the completion of the Intercolonial Railway to Halifax and celebrated the engineering feat linking east to west via the transcontinental CPR. As an exemplar Parliamentarian, PM Macdonald championed protectionist trade measures against the U.S. and negotiated the entry of provinces PEI, Manitoba, and B.C., and the acquisition of all lands in between. For these accomplishments, the knighted Sir John A. Macdonald is to be forever regaled as the chief architect of Confederation and the primary Founding Father of the budding nation Canada.

In the quiet of his den, Macdonald sipped his mulled wine. Canuck thought of the PM’s love of alcohol and then of the many blotches on the PM’s political career. Yet, as he watched Macdonald scribbling the campaign notes he was suddenly overcome by the magnitude of this man’s perseverance inestablishing a country that aspired to the laudable principles of peace, order, and good government. Clearly, the illustrious results of this man’s work must not be taken for granted.

Then, in what seemed to be a blink of an eye, the Ghost of Christmas Present took Canuck by the hand and led him to a remote prison in China. There behind bars he met a thin, unhappy figure who he identified as Michael Spavor. “The two Michaels” as all Canadians have come to know them – Spavor and Michael Kovrig – are spending their third Christmas in cells. Canuck shivered at the thought that the two Michaels have been languishing in captivity now for almost 750 days, away from their families and friends, and from their country.

Canuck reasoned it was not right that these men were held as payback for the arrest of Huawei Technologies executive Meng Wanzhou. His mind wandered to disturbing accounts of other Canadians who were jailed by the Chinese Communists. Behind bars in China meant rounds of tiresome interrogations, infrequent meals, and the cellblock lights shining 24 hours a day. There were reports that the two Michaels also spent time in overcrowded cells. The communists had denied them visitors, news of the outside world, and any word from home.

Stupefied, Canuck thought how Communist China is so unlike Canada (even though, he mused, PM Justin Trudeau admires the Chinese Government and it seems he has accommodated and made excuses for countless Chinese misdeeds). It troubled him to think how little Canadians consider the foundational underpinnings of our country. Obviously, the two Michaels knew too well the differences between our countries. On the one hand, Canadians can be grateful for our luxuries of abundant food, clean water and warm surroundings. On the other hand, the Michaels are being held by a suppressive government that has little regard for freedom of speech and movement, for an independent judiciary, for individuals’ rights and possessions. Though this year in Canada we may have seen Trans Mountain blockades and Maritime lobster pound standoffs, we have not experienced the tragedies of the Uighur Muslims or Hong Kong democrats.

There are many contrasts to be made mused Canuck, yet here sits Spavor. If we do not speak out about our difference and defend our liberties, but for the grace of God go I.

Without warning, the Ghost of Christmas Yet to Come grabbed Canuck and sat him down in an office, in front of a woman pounding away on a keyboard. He scanned the desk and determined he had somehow skipped through time to the year 2050. Canuck was visiting an editor of Ottawa parliamentary publication, The Hill Times, who was preparing a year-end edition. He saw on the screen, the cover story read “States of Alberta and Saskatchewan Celebrate 25th Anniversary.”

The editor looked up into the computer screen to her news team; the meeting to review the papers’ editorial line-up commenced. The Alberta and Saskatchewan cover article will feature the economic boom of their resource-based industries and how these former provinces flourished as part of the United States. Three accompanying pieces are to provide a full picture of the former country Canada: 1) a review of the socialist reforms undertaken in the Republic of Canada; 2) trade and resource development news between British Columbia and China; and, 3) the Republic’s appeal to international bodies to assist with Russia and China military encroachments in its northern territories.

There are two parliamentary columns: one to cover the U.N.’s latest terms for the Republic’s debt payments, and a second one on the newly imposed goods and services tax of 33 percent. The lead year-end editorial will speak to how Canadians should be forever grateful: the Republic of Canada is providing womb to tomb state programing, including a guaranteed income for a majority of the population. A secondary editorial is to draw a comparison between how past Canadian protests that removed statues of Sir John A. Macdonald are much like the current mobs who are pulling down the statues of the Republic’s Founding Father Justin Trudeau. The underlining message in this editorial is: Canadians must take lessons from and not erase their history.

The Ghost of Christmas Yet to Come dropped Canuck back into the comfort of his bed where he stretched from his fetal position. What a dream… what a nightmare! Could it be? Would it be? Canuck immediately jumped out from under his sheets and hurried to the window. He chortled. No doubt, Jacob Marley and the apparitions had given him a great gift – and there was much, so much he must do in 2021. 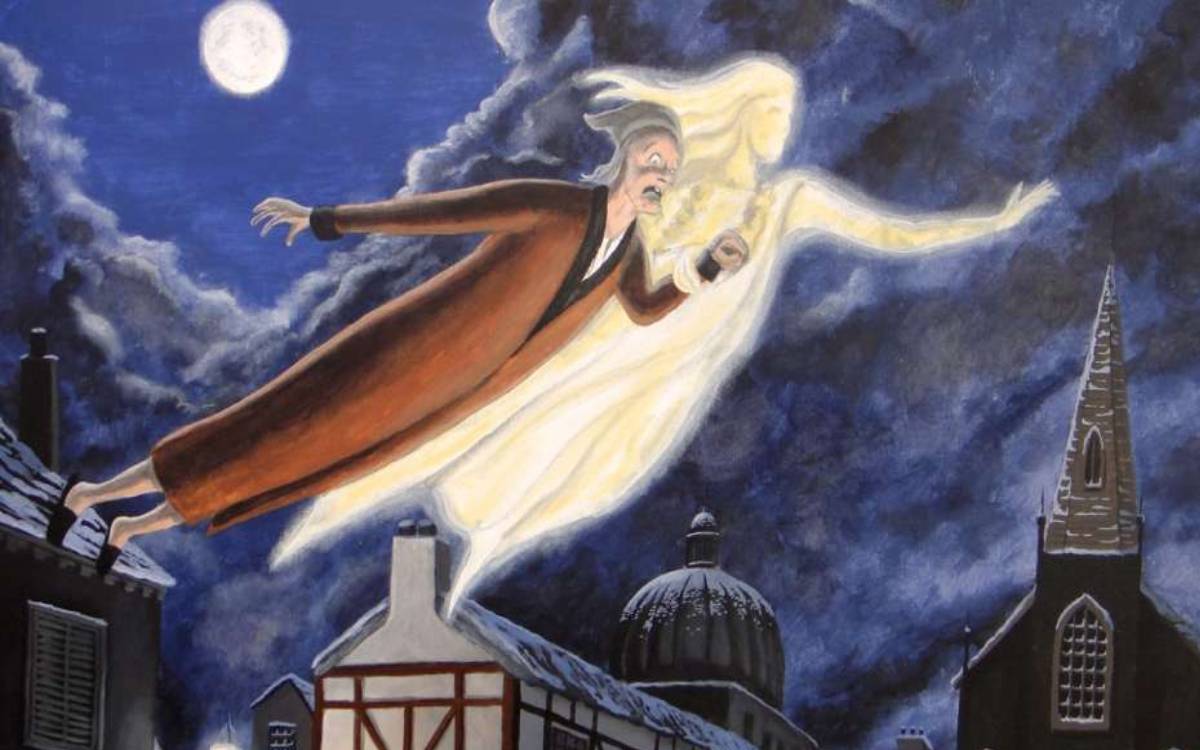