A modest proposal for the 2024 presidential race 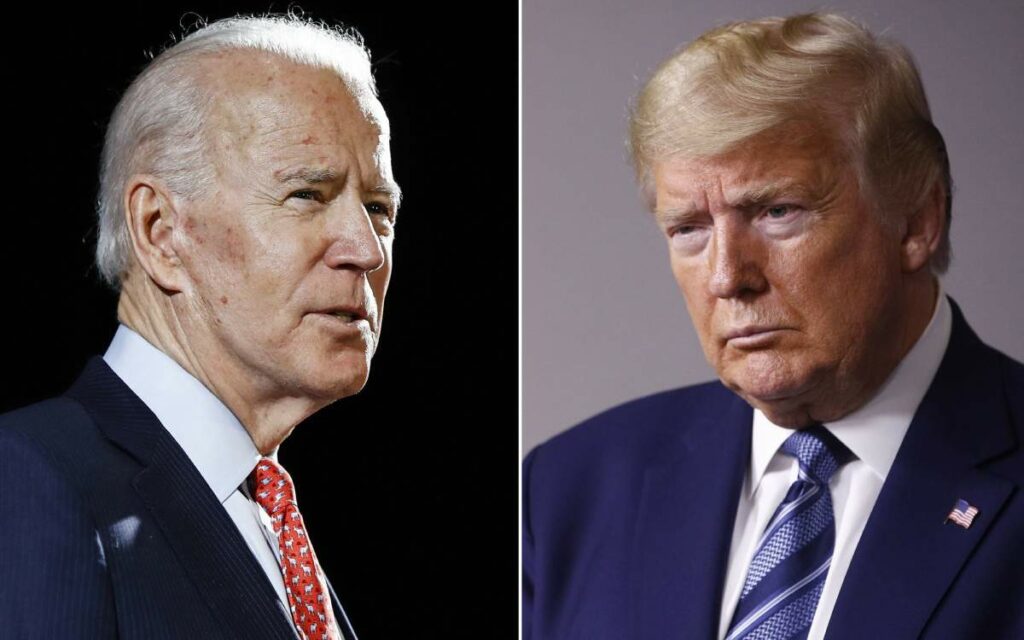 Both Democrats and Republicans should look to the next generation of leaders and put forward nominees who are, at the very least, cognitively intact and capable of building consensus. This would of course disqualify both Joe Biden and Donald Trump. Photo credit: AP

The political schedule in the United States heats up in 2023. With a presidential race set for 2024, both parties will want to set their line-ups, hold debates, and get ready to select their nominee.

While the Democratic Party waits on President Biden to decide whether he will run for a second term at the age of 81, the Republican Party already has one announced candidate, with many more queuing up for what promises to be a very competitive race for the White House. Who can we expect to see jump into the races, especially if Joe Biden retires? There will be no shortage of predictions made, a lot of handicapping about different candidates and their chances, and a few twists and turns before we even get to the nominating process. Before that ship sails, it might be a good exercise to suggest what would be the best race for Americans and would provide the country with a chance to return to some level of constitutional governance.

On a recent edition of former G.W. Bush administration official Dan Senor’s Call Me Back podcast, Yuval Levin, Director of Social, Cultural, and Constitutional Studies at the American Enterprise Institute, addressed the issue of the 2024 election. Levin fears a replay of the last election with former president Donald Trump running against President Joe Biden. As Levin points out, the two parties are presently stuck and represent minority positions on both sides. Arising out of this quagmire, each party tries to define the other party as too extreme, too narrow, and too corrupt. The resultant outcome means both parties, in their desire to prove the other would push the nation into the abyss, have forgotten how to govern.

When Levin posits this case, it speaks to a multitude of concerns those of us who believe in a constitutional republic have become increasingly concerned about since at least the Obama administration. Over time, less legislation is starting in Congress and more orders are coming from the executive branch. Instead of elected representatives negotiating legislation, making compromises, and understanding how problem-solving for issues in cities does not necessarily look the same in rural America, both parties, no longer able to win strong support, govern out of weakness legislatively, and look to the president to drop the hammer. A healthy democracy needs its elected officers to weigh in, be held to account, and serve as the host for debate, discussion, and decisions.

If the nation gets a replay of 2024, Levin concludes that it will be four more years of what he calls minority rule. In this analysis, Levin hearkens back to the period between 1952 and 1992 when America basically trusted the Republicans with the White House (seven out of ten elections went to the GOP), while investing Congress to the Democrats who held both Houses for most of that 40-year period. Levin calls this majoritarian rule. Both parties governed from strength with the endorsement of the electorate.

Since then, the presidency and Congress have shifted back and forth rather quickly between the two parties with closely decided elections. This gives neither party much traction while forcing out moderate members. The parties have little common ground and are seemingly less able to even find points of consensus. The executive office fills the void and a bad problem becomes worse. Democracy begins to look like a squabble over presidential orders, often conceded to be unconstitutional, being signed nonetheless, and the judicial branch has to rule on whether the order is legal or not. The ugliness of a country being governed without the proper engagement of the legislative branch describes the American system today. A battle between Trump and Biden does not get the USA out of that morass.

Levin proposes America would be better served if both Trump and Biden stood down and a new generation of leaders arose. From his suggestions, two candidates seem to rise to the top, both governors of states where they have had to earn their stripes. Governors seem to be better suited for the presidency. They already have experience as chief executives. They know how to cobble together coalitions where necessary, take different constituencies into consideration, manage a budget, and argue on behalf of legislation within their state and beyond. Most of the most effective presidents in the last century honed their skills as governors – Roosevelt, Reagan, and Clinton, in particular. Governorships serve as training grounds and on both sides of the aisle, Levin suggests looking to statehouses for presidential timber.

Along with Levin’s favourites, he acknowledges strength on the GOP bench includes Glen Youngkin of Virginia, Greg Abbott of Texas, Brian Kemp in Georgia, and Ohio’s Mike Dewine. The Democrats could run Gretchen Witmer (Michigan), Roy Cooper (North Carolina), Michelle Lujan Grisham (New Mexico), Gavin Newsome (California), or Tom Wolf (Pennsylvania), all of whom list serious credentials for the nation’s highest office. But Levin targets Ron DeSantis of Florida and Jared Polis of Colorado for particular attention. In these men, he finds two highly accomplished politicians who have governed two fairly even-divided states and created consensus. What Levin and many Americans seek at this point could be characterized as a return to normal governing. The populist right, infatuated with another Trump campaign, do not understand how unlikely his presidency emerged.

If not for the Democrats nominating the most unlikeable presidential candidate in history and Trump’s subsequent threading of the electoral needle to take Wisconsin, Pennsylvania, and Michigan in razor-thin margins, despite a one million plus deficit in the popular vote nationally, he never becomes president. Trump, never one to lead with humility, possesses no record to suggest he can create any comity with his opponents and displays no skill at reconciliation. He is, as George Will once suggested, not merely like a bull in a China Shop, but rather like a bull who carries his own China Shop with him. The nation deserves a better alternative than Donald Trump and the Republican Party needs a better nominee. DeSantis governs from the right, but presents a polished and informed image and a record of achievements which provide Americans with a choice.

As for Polis, he stands as a new kind of Democrat, one willing to row against certain progressive dictates including the indefensible teacher union position which kept kids out of school long after it became obvious that the harm outweighed the threat. Polis’ home page describes him as an entrepreneur, education leader, and public servant. The site goes on to say, “After launching several successful companies, Governor Polis committed himself to making sure other Coloradans had the opportunity to pursue their dreams through founding schools for at-risk students and new immigrants and started nonprofits to help veterans. Prior to serving as Governor, Polis served on the State Board of Education and represented Colorado’s 2nd Congressional district.”

Polis’s prescriptions may not please generic Republican voters, but the nation has millions of citizens who self-identify as independents. Polis can make the case for a centre-left program and provide examples of his leadership in Colorado. The idea of 81-year-old Joe Biden, cognitively in decline, tired, and retelling false stories about himself and his late father seems repulsive. Biden’s familiarity with the truth always wavered between fantasy and fiction in his best days. Add the embarrassing spectacle of a younger opponent taking him on in a debate and Democrats should feel compelled to also up their game, for both party and nation. In Robert Frost’s memorable poem, The Road Not Taken, the author chooses one path less traveled (two novel candidates). Let us hope Democrats and Republicans alike do the same in 2024, and find as Frost did:

Two roads diverged in a wood, and I—
I took the one less traveled by,
And that has made all the difference.