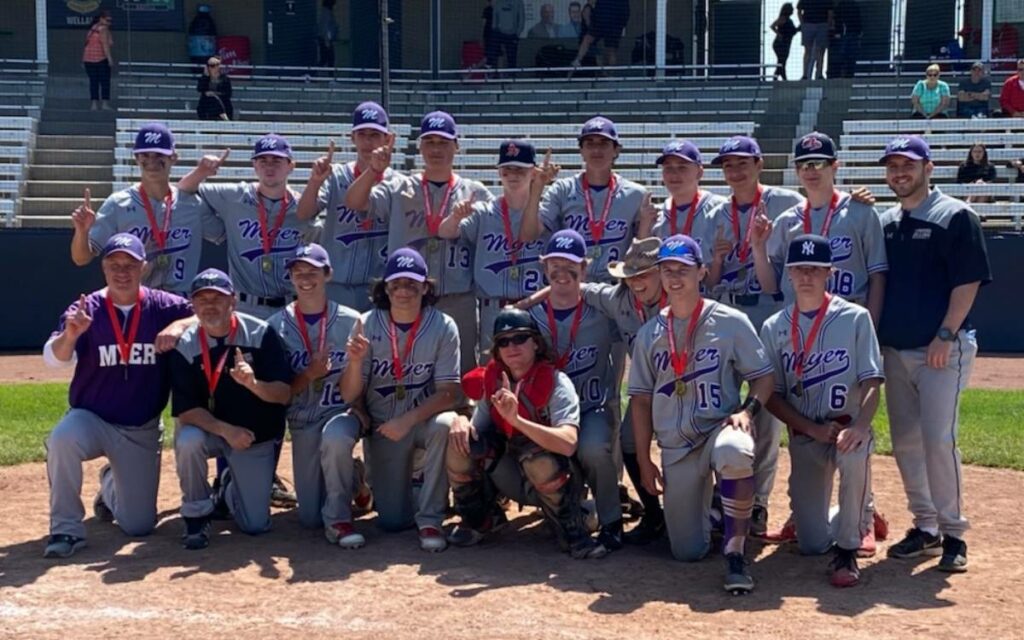 The Niagara Falls high school has now made it to OFSAA for boys baseball four out of the last five times the tournament’s been held. Supplied photo.

The last full season of high school baseball occurred in 2019. That year, perennial powerhouse from Niagara Falls A.N. Myer won the SOSSA championship and then went all the way to the OFSAA final. In the gold medal game, they lost 7-6 to Humberside of Toronto.

Myer breezed through a shortened season, challenged only by E.L. Crossley in a close fought zone championship semi-final, before embarking on the SOSSA tournament.

Myer drew Ancaster in their first game. Grade 11 Zach Whalen threw four strong shutout innings, striking out seven. He was followed by Jase Burdon, another member of Myer’s strong grade 11 contingent. Burdon held Ancaster to one run over four innings. In the bottom of the eighth, with the game tied 1-1, Myers’ Jack Shannon hit a game winning single down the first base line to put Myer into the final.

Earlier in the day, St. Paul of Niagara Falls defeated Grimsby. The two Niagara Falls schools faced off in the afternoon SOSSA final. Whalen helped again on the mound along with Myer captain Tim Somerville.

Myer jumped out to an early 2-0 lead on hits by Erik Iseppon, Colby Webb and Whalen. That lead held up until the bottom of the seventh. That’s when the heart of the St. Paul order got the bats going.  Consecutive hits by Great Lakes Canadians pitcher Matt Donnison, all-star catcher Joe Vetrone and Jack Kemp scored a run. After a hit batter, with the bases loaded Somerville bore down and struck out the final two for the save. Somerville struck out seven in his stint.

“In SOSSA, the Hamilton Niagara loop, we face some great competition”, said Myer coach Dave Buchanan. “Every year they have great players and are a real challenge.”

As the SOSSA champion, Myer won a birth at the OFSAA 18-school tournament held this week and next in Toronto and Windsor. Myer has developed a strong program with a great reputation and the seeding committee recognized that and made them the second seed in the West division.

Myer has made it to OFSAA in 2015, 2016, 2017 and 2019 – four of the last five years the tournament has been held. They have fared progressively better with seventh, fifth, fifth and second place finishes, respectively.

“Our kids take great pride in the program,” said Buchanan. “They carry the past players successes with them – and they all want to change our 2019 silver to a gold this year.”

With SOSSA behind them, Myer journeyed to Burlington for the Garth Webb tournament last week.  They beat Garth Webb 17-0, Milton 11-0, Ancaster 4-3 and Iroquois Hills 3-1 in the finals to win the tournament.

Myer enters OFSAA with a 13-0 record.

“Garth Webb was a good tune-up. We got great pitching from Jack Shannon, Whalen and Burdon but also from our younger grade 9’s like Luka Valvo, Cole Bateman, Jeff Vormittag and Sawyer Neal.”

Asked what he thought their odds were at OFSAA this year Buchanan said, “We have good deep pitching and good team defence, as long as both hold up and we can get some timely hits, we should do well.”