A shot across the union bow 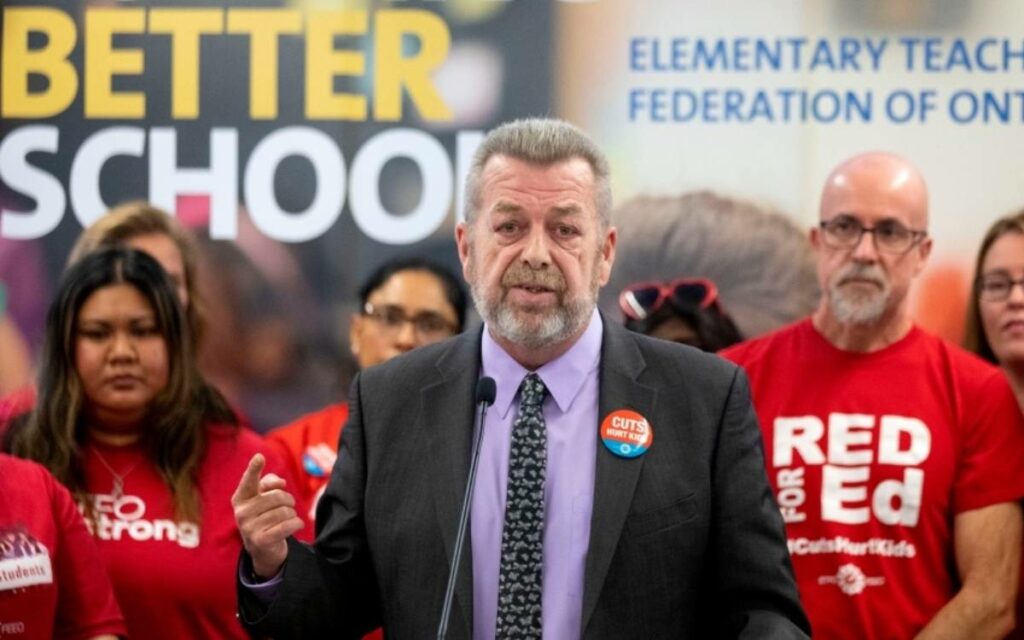 Sam Hammond, current president of the Elementary Teachers’ Federation of Ontario (ETFO). He, alongside his secondary school counterpart, were none too pleased with Premier Ford’s recent allegations that at least one of the teachers’ unions could “potentially put an injunction against opening the schools.” Photo credit: The Canadian Press/Chris Young

During his much-awaited press conference on the state of the lockdown in Ontario late last week, Premier Doug Ford took a shot at the teachers’ unions when commenting on the issue of school closures.  While disappointing many Ontarians by extending the current stay-at-home order for a further two weeks until June 2, Ford also said, “On the one hand, we have some doctors saying they want to open the schools. On the other hand, we have the teachers’ unions saying we can’t do that right now.”

When asked if schools would be reopening at all during this school year, Ford responded, “We have some [doctors] that are saying yes, but then we have the teachers’ union that wants to potentially put an injunction against opening the schools. I just need the labour leaders to sit down with the [doctors] and come up with a solution.”

Naturally, the teachers’ unions were quite annoyed with Ford’s comments and responded by saying that there were no “current” applications for an injunction. However, the notion is not that far-fetched, as recent months have seen teachers’ unions threatening the government with legal action on several occasions.

Of all the public sector unions, teachers’ unions have been the most consistently obstructionist throughout the pandemic. It sometimes seems that these unions will only be satisfied if schools are kept closed for the duration of the pandemic, with teachers earning their full and generous salaries and benefits despite not being fully employed.

Medical authorities’ views on keeping schools open are by no means unanimous, with some doctors favouring schools remaining closed to in-person learning, while many others believe that the damage to children’s mental health is sufficiently serious that schools should be re-opened. Ford’s suggestion that unions could take the positive step of sitting down with medical professionals to reach a workable solution is hardly outrageous.

Teachers’ unions – and many other public sector unions for that matter – deserve much criticism for their constant demands for more from private sector taxpayers and their incessant opposition to measures that would improve education quality and that of other public services. This is particularly true in the context of the pandemic when so many private sector workers are in serious financial difficulty.
Unions love to profess that they represent all workers, but public sector unions put the lie to that claim with their lack of concern about bankrupting average citizens, so long as they are lining their own pockets.

It is time that more parents and taxpayers pushed back against the teachers’ unions, and joined in expecting them to show some constructive behaviour. Unions are immensely privileged in Canada, with dues forced by law, zero requirements for public financial transparency, and the ability to spend the mandatory dues on whatever they please. In most developed countries, employees have much more choice as to whether to pay union dues or not, and unions must disclose how they spend members’ money. Canadian unions spend significant amounts of their members’ dues to engage in partisan politicking during elections, which is outlawed or severely constrained in most countries.

Given all the privileges unions enjoy in Canada, it is hardly unreasonable to ask them to participate in decision-making in a more constructive way, instead of always sniping from the sidelines. This is especially the case at a time of crisis like the pandemic when most groups and individuals have been focussed on trying to play a positive and helpful role.

Instead of just taking verbal pot-shots, however, Ford and other governments should undertake more tangible measures to provide competition to public sector union monopolies in education and other public services. This can be accomplished in part by enabling such things as charter schools and vouchers within the purview of the public education system. Competitive options would not only improve education quality but be a more efficient use of tax dollars and provide parents with the choices they need and deserve. And who knows? Once teachers’ unions no longer have a monopoly and they must compete for public support and dollars, they may find a more positive and constructive approach is desirable indeed.