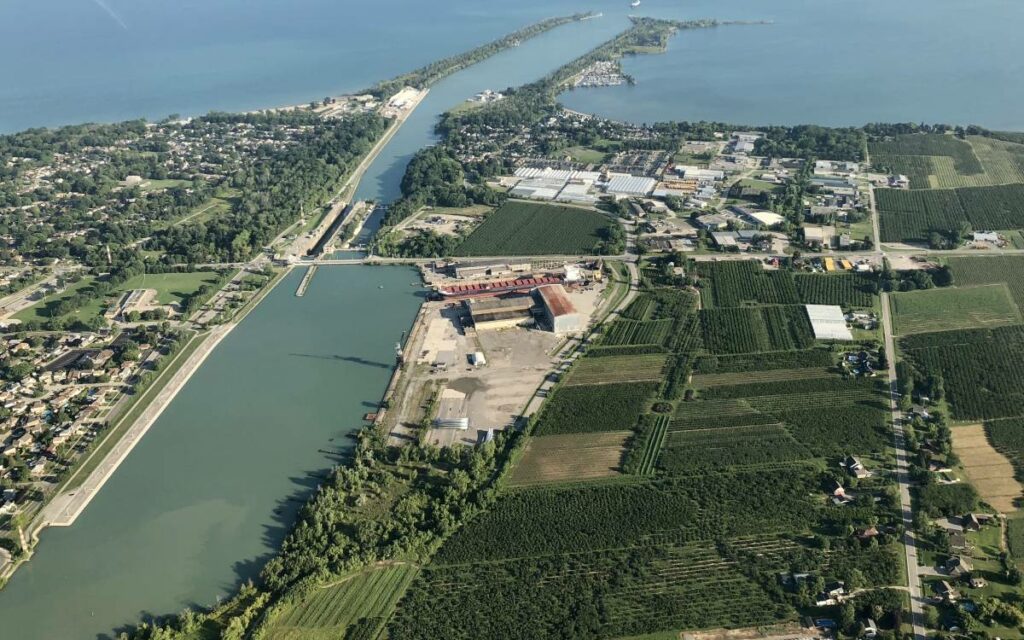 An aerial view of Port Weller. The property in question is situated in the centre of the image, east of the canal and shipyard, south of the road leading to the canal crossing.

Quick question: what does Niagara, and St. Catharines in particular, need more of right now?

If you’re in camp B., you’re on the side of the Niagara Homebuilders’ Association (NHBA), a local residents association, and countless prospective homebuyers struggling to find a home at a reasonable price in the region.

If you’re in camp A., you’re on the side of Mayor Walter Sendzik and St. Catharines city council.

The issue surrounds a piece of property near the Welland Canal in the Port Weller community of St. Catharines.

The proponent of the property would like to transform the 45 acres of non-Green Belt farmland, vacant fields, and miscellaneous buildings at 406 Lakeshore Rd. into a mixed-use development with 800 housing units of all varieties: apartments, stacked townhouses, condo townhouses, and singled detached homes. The site would feature a 5-acre park, commercial plaza, and several acres of warehouse buffer between the shipyards to the west and residential area to the east.

St. Catharines city council, led by Mayor Walter Sendzik, wants to ensure the property remains zoned for industrial use only. For months, councillors have even tried to get the provincial government to issue a Minister’s Zoning Order (MZO) to keep the land designated as is. However, thus far, they’ve failed to get Minister of Municipal Affairs and Housing Steve Clark to bite.

But why, at a time when housing unaffordability continues to spiral out of control – helped along, in part, by a significant lack of supply – does the City of St. Catharines want to prevent the development of more housing options?

Council has provided a hodgepodge of alleged reasons over the last several months as to why the area shouldn’t be residential: from it not being near schools or transit (despite multiple schools and a three-route transit connection right across the canal), to the property being too close to Heddle Shipyards (despite the developer willing to accommodate substantial buffering measures), to having to protect a certain amount of surplus employment land for future growth (despite the Niagara Region having the ability to allocate the designation of lands around the region effectively anywhere and any way it wants).

Speaking to NewsTalk 610 CKTB radio host Tim Denis on Wednesday, NHBA executive officer Chuck McShane – whose organization sent out a press release alerting the media and public to the issue at hand – said that the property in question as been zoned industrial for 60 years and over the decades has received very little interest from industry investors.

“We really don’t see a lot of change going on there,” said McShane. “It’s too far from the highway for companies to come into town.”

Located about 10km from the nearest 400 series highway and surrounded by existing residential and agricultural lands, transportation to and from a hypothetical facility would be problematic for any potential company, as well as the surrounding neighbourhoods.

“Nobody wants tractor trailers coming up and down Niagara St. day in and day out.”

As the NHBA executive officer noted, St. Catharines city council has repeatedly “banged on the drum” of needing more housing options for all tax brackets and yet when provided a viable opportunity, they try to nix the project.

“I’m not sure why we’re here,” said McShane, “we should be embracing this type of development.”