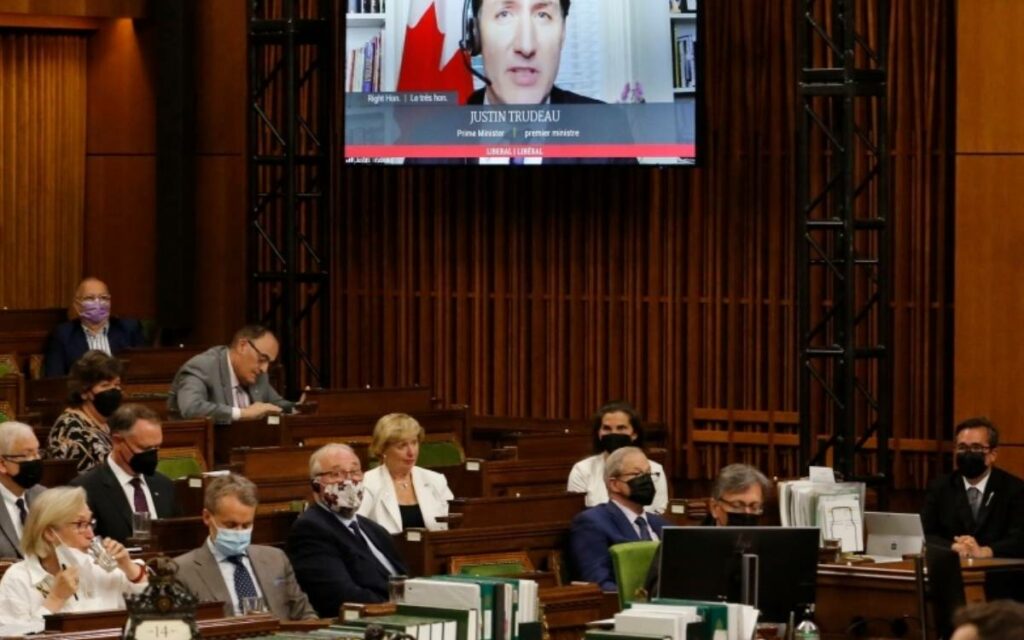 The current parliamentary session could end as early as this week. But before breaking for BBQ season, the governing Liberals are hoping to tie up some loose ends and rush through at least one key piece of legislation. Pictured: Prime Minister Justin Trudeau rises virtually during Question Period in the House of Commons, June 14, 2022. Photo credit: The Canadian Press/Patrick Doyle

As the weather gets warmer and the days get longer, summer is here. Just like school-aged kids wanting school to end and summer vacation to start, the House of Commons and Members of Parliament are getting antsy for the end of the spring session and returning to their ridings. But before they can hit the local BBQ circle, there are a number of government priorities still left to tackle.

Since returning to office after the fall election in 2021, the Liberals’ ability to introduce and pass legislation has been challenging. Their agenda seems to be constantly derailed by world and domestic events. Instead of filling their mandate, the Liberals have been busy playing catch-up after the truckers rolled into town, lingering impacts of COVID and the ongoing conflict in Ukraine.

The government just passed their Fall Economic Update that was tabled in December. The government’s current focus is on having Budget 2022 passed by the House of Commons and Senate before the end of the session. If the rumours around Ottawa are true, the session could end as early as tomorrow.

At center stage is the special committee to investigate the use of the Emergency Act. To describe the weekly committee meeting as a partisan circus would be an understatement. On one side you have the government trying to justify their actions and taking a moral high ground on the situation. While the opposition, mainly the Conservatives, are trying to use their words as a jackhammer to undermine the mountain that the government has created to be able to justify the high ground they stand on.

The tension at the committee has spilled over into the House lately. Last week in Question Period, a part of the day that is a political theatre at its best, the Conservatives used their time to ask the Prime Minister when he would fire the Minister of Public Safety over the use of the Emergency Act. Those on the government bench used this as an opportunity to highlight the work that the government has done to make Canada a more safe and more secure country. A response that did not sit well with the Conservatives.

Beyond the use of the Emergency Act, there has been significant debate, disagreement and delay around the government’s proposed changes to the Broadcasting Act, Bill C-11. Depending on who you talk to this bill is about censoring free speech or modernizing rules around how media is consumed. Either way you cut it, the government has done a masterclass series on how to fumble one’s way through passing legislation with this bill.

The issues around making changes to the Broadcasting Act and censoring free speech date back to the last Parliament, where the government struggled to articulate the need for this legislation. Their struggles continue but are now being moved through Parliament by a minister who understands the process and politics around the legislation.

In traditional government fashion, the Liberals are trying to rush Bill C-11 through Parliament and into law. Though they are facing great criticism from the other political parties, stakeholders and the media. There is genuine concern that this legislation will have several unintended consequences that will harm Canadians and online creators.

Instead of listening to Canadians, the government is content with pushing their agenda through with little consolation or appreciation for others’ views. This approach is one of the reasons that Ottawa has become such a toxic environment where there is more bickering than actual decision-making.

With a summer break, hopefully, the return to Parliament this fall will include cooler heads. Maybe then Members of Parliament can act in a civil way with each other and work on finding solutions to problems that Canadians are facing. Instead of creating more problems for soundbites and self-praise.