Audi Alteram Partem – Hear the other side 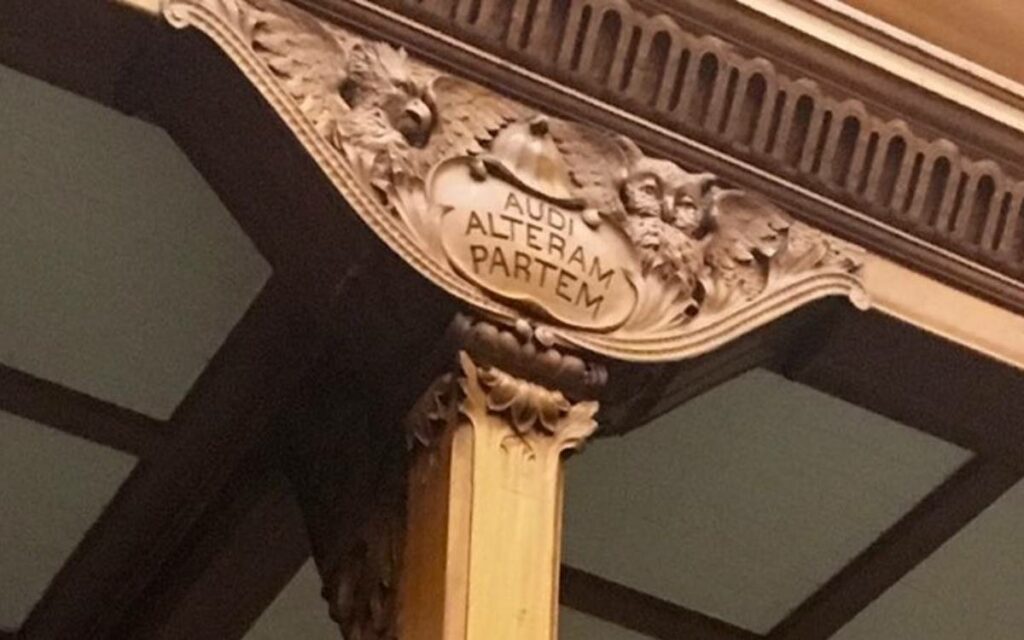 When the final book is written on the North American wide response to the COVID-19 pandemic a major contributing factor to why so many mistakes have been made will be partisanship.

This writer has said as early as February, there is no worse time for a pandemic to hit the United States than during an election year. No matter what the science says, no matter what kind of response is needed, the reaction will be based on politics.

So is it any wonder that in a time of pandemic when access to health care is paramount, both sides fight about how to achieve it?

Furthermore you have one side that believes if you downplay the pandemic, its causes and solutions, then health care won’t be a major election issue and then you can pivot to the economy. The other side wants to play up the pandemic even greater than is necessary so it can say the economy doesn’t matter.

What you are left with is a bunch of Americans in between who are not being properly served by either political master. And if you happen to be on one of those sides you staunchly proclaim you are in the right.

Here is a simple solution. Give me a platform that addresses health care and economic realities and don’t tell me the “uber rich” will pay for it. They won’t, they will simply move their money away so you can’t access it and the new middle class will be called rich and see more and more taxes.

This is what is happening, not some dreamed up scenario.

In Canada we seem to be sitting back with a sense of smugness while ridiculing our neighbours, our number one trading partner and a major key to economic stability because of a fly. Yes a fly landing on US Vice-President Mike Pence’s head got more attention on both social and unsocial media this week than the fact our country can’t seem to get rapid testing.

Last Tuesday on the Global Radio 640 Alex Pierson Show – my usual slot if you want to listen – I pointed out that I truly believe the Canadian response would be better if the Conservatives just stopped giving advice.

In all seriousness, if you look back in media coverage you will find numerous examples of recommendations from border closures, to masks, to help for business that were sloughed off by federal Liberals.

Even more recommendations like tighter contact tracing, crackdowns at airports, and oversight on people needing to quarantine have all been dismissed. The latest questions around rapid testing and why Canada seems to be behind third world nations gets no response, only chest pounding and back patting about buying 7.9 million tests.

This is a government that promised $2,000 for every Canadian to buy a canoe this time last year, but doesn’t seem to have it in them to purchase rapid testing for every citizen.

However, I think the solution is to tell my friend Erin O’Toole and his merry band to shut up. Stop asking for common sense and logic to prevail, just slip the Justin Trudeau government anonymous notes with the signature “a friend from downtown Toronto” or Montreal, that will be sure to get their attention.

In all seriousness, neither President Donald Trump nor Prime Minister Justin Trudeau was elected by a majority of those who voted. In both cases in fact, someone else got more votes than they did.

Despite this fact neither man seems to think the group or person who more people preferred to run their countries are worth listening to. Not just in normal times either, during a freaking pandemic.

And why? Pure, unabashed, partisanship.

Now I know there will be people reading this who think I am as partisan as they come, you’d be wrong. I have not only voted, but also worked for different political parties.

In fact I would probably still be a federal Liberal if it was still Jean Chretien’s party, one that could balance finances with social change. I became a conservative honestly, I saw problems with the party of my youth, thinking they exist to rule rather than lead.

What I mean by that is the Liberal Party of Justin Trudeau thinks they were placed on the earth to force everyone to follow their ideology. Canadians, especially in a pandemic, don’t need the green agenda forced upon them, they need rapid testing and sound management of the economy so there can be a real recovery.

As much as I support the investment in electric at the Oakville Ford plant announced this week, I still would prefer rapid testing.

And Progressive Conservative Premier Doug Ford – someone I support – helped make the announcement. If I were in the media throng covering the event every question would be about Ontario’s COVID numbers and rapid testing.

Yes this was an important announcement and yes I support economic growth, but this felt like a partisan stunt. And if they were normal, non-electric, cars there is no chance Mr. Trudeau would have been there to promote good family-supporting jobs – only ones that allegedly save the environment.

To sum up I am not Mr. Trudeau’s biggest fan, but I will give him kudos for helping people access money they need to live and run their businesses and he has done a better job than most of his contemporaries. He still needs to listen and respond better to people’s needs, not just his wants, and rapid testing and contact tracing is more important than promising to plant trees – I have personally planted more than the Liberal cabinet.

As for Mr. Trump, I don’t much care for him either, but proper forestry management is essential to reducing fires – a point people are making jokes at him about. He is right on that, but dead wrong on COVID not needing to be taken seriously.

There is a Latin phrase carved into the chamber at Queen’s Park – Audi Alteram Partem. It is translated to “Hear the Other Side.”

This is something needed in normal times.  In a pandemic, there are no other sides. Everyone can be right, everyone can be wrong, but everyone is in this together. We succeed together, we fail together.

Wear a mask, stay home if sick, don’t go to parties, quarantine if necessary and for the love of God, lets get testing done.