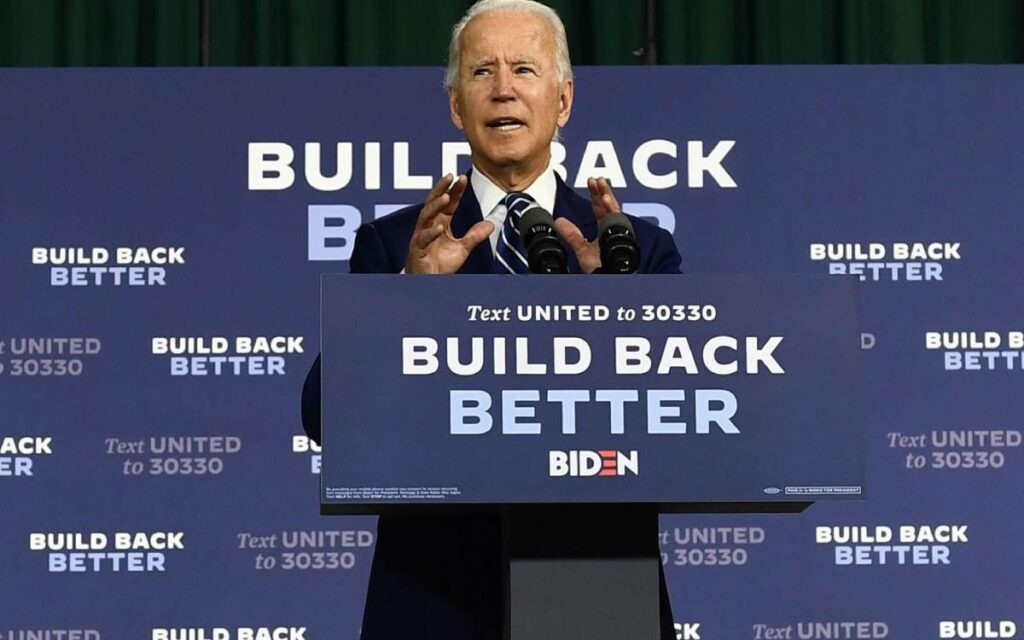 “Build Back Better” (and its many variations) is a slogan that has been adopted by a number of political figures on the political left as of late, including U.S. president Joe Biden. Photo credit: MSNBC

During the recent federal election period, the phrase “Build Back Better” was heard from time to time, mostly from Prime Minister Trudeau and some of his Liberal colleagues, to describe what in their view must be done to help Canada recover from the pandemic.

Now that the Liberals are re-elected, albeit with a minority, they will undoubtedly be pursuing this plan with the support of the NDP and possibly the Bloc Quebecois. Building Back Better certainly sounds like an appealing concept, but many people are not aware that it is actually code for a specific political agenda that is being promoted by organizations such as the United Nations (UN), the World Economic Forum and others who don’t exactly have the best interests of average Canadians at heart. It is worthwhile for everyone to become more informed about this agenda, as it is well advanced and affecting our everyday life in many ways.

In many countries, including Canada, municipal governments have been at the forefront of promoting and implementing the “Build Back Better” game plan, unbeknownst to the vast majority of Canadians.  The so-called International Council for Local Environmental Initiatives (ICLEI) was established as far back as 1990 at the UN, and now about 2,000 cities, towns, and counties in 126 countries are part of that network. Out of this has evolved a so-called Compact of Mayors who collaborate to set such things as Greenhouse gas (GHG) reduction targets and other measures to supposedly further environmental goals in concert with their counterparts around the world.

A group called the C40 Large Cities Climate Leadership Group was set up in 2005, with the participating Canadian representative being Toronto. In the midst of the pandemic, the C40 put out a discussion paper talking about how the pandemic provided an opportunity to “drive a green and just transformation in our cities” and said their members, including Canada, “reaffirmed commitment to the principles of the Global Green New Deal”.

The Green New Deal is widely recognized as the far-left vision of an extreme environmental agenda, often coupled with various social justice elements, and is usually associated with the far-left faction of the US Democratic Party. It is certainly nothing Canadians have every been asked to vote on, and Canadian representatives should not be involved in initiatives that have not been endorsed by the Canadian electorate. The fact that it has consistently been shown that Canadians pay the least attention to local municipal politics, and that voter turnout tends to be lowest in municipal elections, raises concerns that all of this activity is happening under the radar of most voters and is therefore all the more worrisome.

A recent example of such activity concerns motions in favour of phasing out natural gas; motions that have been approved by 23 Ontario municipal councils to date. Roughly half of Canadian households rely on natural gas for heat and other essential energy needs, and the notion that this important fuel will be phased out anytime soon is ludicrous. A perverse fact is that when the environmental activists were bent on getting rid of coal 15 years ago or so, they fully endorsed cleaner natural gas as a replacement.  Now that coal has been eliminated in Ontario, natural gas is the next target. The environmental goalposts keep moving, and middle-class households are the losers.

Although the stated intentions of these initiatives may appear admirable at first blush, they all too often end up endorsing policies that increase tax levels, discourage housing development thereby increasing housing costs, expand the size and scope of governments, impose significant amounts of costly red tape on businesses and otherwise encourage policies that are unrealistic and damaging to the economy and taxpayers.

The “Build Back Better” agenda is well advanced in Canada, yet most Canadians are likely unaware that they have voted in favour of such policies when they vote Liberal, NDP, and for various politicians at the provincial and municipal level. Although politicians may cite slogans such as “Build Back Better” from time to time when they seek election, they have been very vague on exactly what this means for average citizens.

As a result, most Canadians have not been sufficiently informed of how much this plan has already been the foundation for a considerable amount of government policy over the past few years, and that it has very much been a key reason why life is more costly, why high housing prices and inflation in general have become so problematic and why the private sector economy that provides employment for the majority of Canadians has weakened while the cost and size of government has grown. Post-pandemic, there is every reason to believe this situation will get worse.

There are many facets to this issue that cannot be adequately covered in one column, but this recent discussion by Peter Foster in the National Post is instructive. Especially germane is his concluding comment: “It won’t be pleasant”. Beware, Canadians.