Brace yourself for more inflation 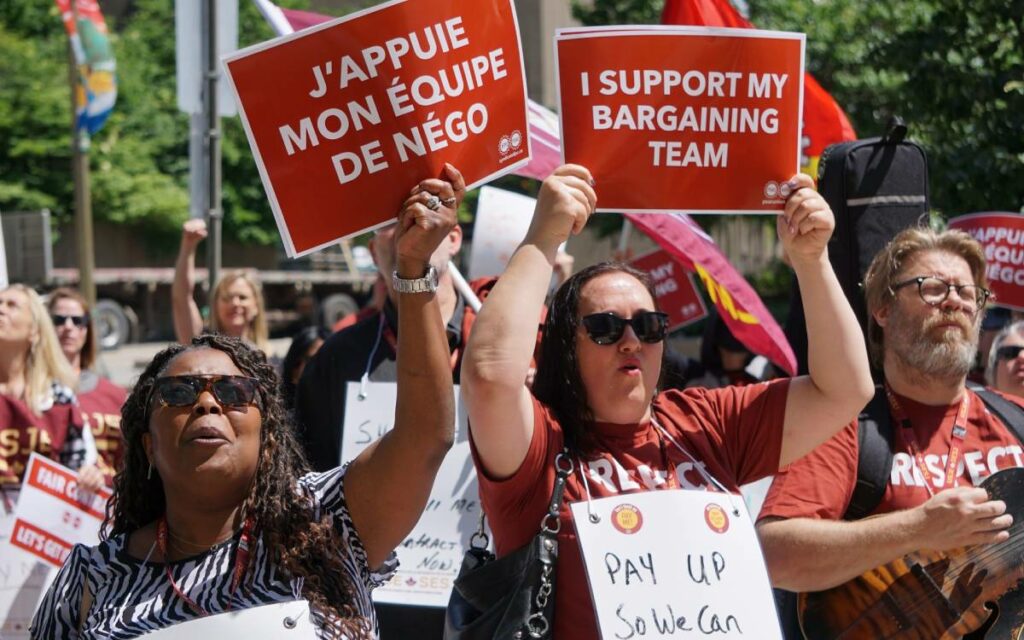 As a new round of union negotiations gets underway, expect any resultant public sector pay raises to increase everyday costs for the 80 per cent of Canadians who do not work for the government. Pictured: Public Service Alliance of Canada (PSAC) members rally for “fair wages” in Ottawa, June 8, 2022. Photo credit: Facebook/PSAC

Remember those “public servants” during the pandemic? Those folks that didn’t lose one cent of a paycheque, despite often not working at all for months on end, while the private sector individuals and businesses who pay for government were being financially decimated? Those folks that got pay raises throughout the pandemic while others lost their jobs and businesses? Those government employees who mismanaged the pandemic terribly but still collected generous bonuses that were supposed to be performance-related, and whose incompetence is currently making such mundane things as passports and immigration approvals impossible to obtain in a timely manner and messing up airports across the country? Well, they would like a raise – a big fat raise.

Recent reports have noted that public sector unions are seeking a very large pay increase to account for the current surge in inflation, and as usual expect the rest of us to pay for it. The Public Service Alliance of Canada (PSAC), which represents about a third of federal government employees, is looking for an annual pay increase of 4.5 per cent over a three-year period – a whopping increase of 13.5 per cent in total. The federal government has to date offered an increase of less than 8 per cent over four years – an amount that should still be very attractive if not still excessive considering all of the other compensation advantages enjoyed by government employees.

For years, research has shown that government employees earn anywhere from 25 to 40 per cent more than private sector employees in similar jobs if benefits are taken into account. Government employees also have the great privilege of defined-benefit pensions plans, retire earlier, take considerably more sick days (as paid sick days are regularly abused), have shorter work weeks and much more job security than their private sector counterparts.

It is outrageous how tolerant private sector taxpayers have been of these excessive government perks and the burden it imposes on them, but hopefully the pandemic has raised the ire of the 80 per cent of Canadians who don’t work for government in demonstrating just how inequitable and financially unsustainable is our current system. If anything, a freeze in public sector compensation for several years would be the most sensible path to bring public and private sector compensation back into line and start to make a dent in the massive debt we have accumulated in recent years.

At present, the federal government offer to PSAC has led to the union walking away from contract negotiations and threatening a strike. The union would like to have a conciliation process to help arrive at a settlement, which is not surprising considering that conciliation processes typically work to the advantage of the union. What PSAC succeeds in negotiating is very important overall, as it is the first union at the bargaining table during the current round of negotiations and whatever it achieves will set the bar for other unions going forward. And whatever gains are achieved for the various federal government unions, they will in turn be used to establish benchmarks for provincial and municipal government unions as well.

At a time when inflation is already out of control in Canada, sharp wage increases in government will merely prolong the agony. One of the newspaper stories about the increased wage demands of government unions was entitled “Canadian Unions Gaining Ground in Wage Negotiations”. A more accurate headline would have been “Majority of Canadians Are Big Losers Yet Again in Union Negotiations”. If there was ever a time that all of our governments, of every political stripe, should grow a spine, this would be it.