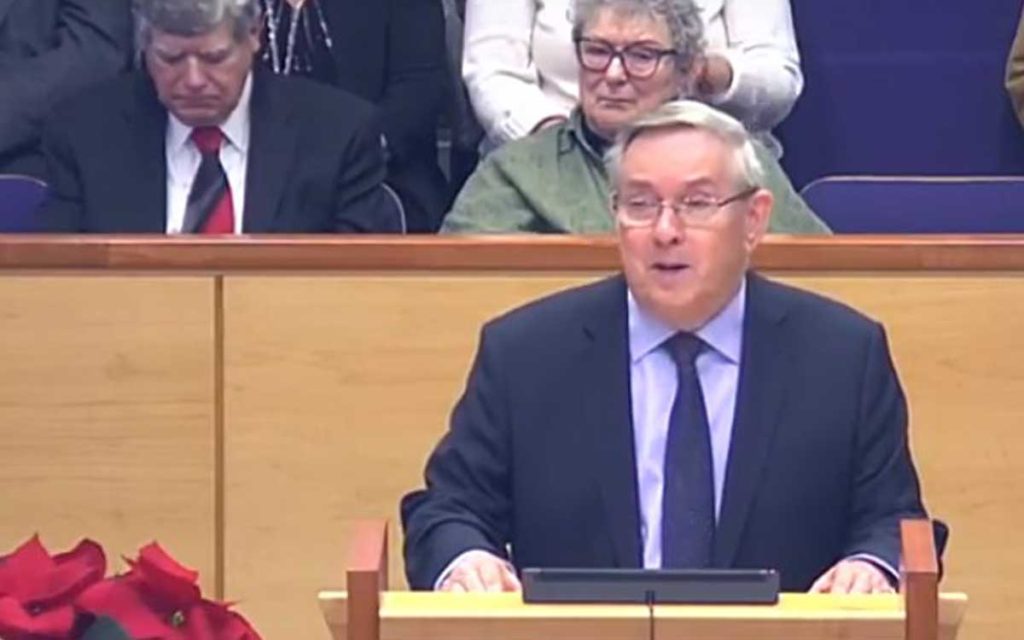 It took an hour and a half but after the three candidates standing for election to be Niagara’s next Regional Chair fielded a series of questions from their councillor colleagues, the result wasn’t close. Former Liberal MPP Jim Bradley walked away with 19 of a total of 31 votes to claim the Chair’s seat. Sixteen votes were needed to secure a win.

Niagara Falls Mayor and someone who will been seen as a leader of this council, Jim Diodati, said; “I congratulate Jim and now it is time for all camps to come together for the common good of Niagara. Our number one priority will be to ensure a good relationship with Queen’s Park and keeping GO transit on track.”

Bradley was nominated by St. Catharines Mayor, Walter Sendzik and that nomination was seconded by Barbara Greenwood of Niagara Falls. Running against the veteran politician were rookie regional councillors Leanna Villella of Welland and Rob Foster of Lincoln. Villella was nominated by Sandie Bellows of St. Catharines and seconded by Diodati. Foster who represents Lincoln was also nominated. Niagara-on-the-Lake’s Gary Zalepa was his nominator and Tom Insinna of Fort Erie was the seconder. Villella captured seven votes while Foster had five supporters.

First time regional councillors from St. Catharines made their mark early with Councillor Laura Ip crafting a motion to suspend the current procedural bylaw and have the vote made public. Past practice was to have it as a secret ballot.  That motion carried. As well, George Darte of St. Catharines put forth a motion to allow questioning of candidates standing for the Chair’s position. That motion also carried.

All three candidates were given five minutes to make their case as to why they are best suited to be Niagara’s next Chair. Bradley went first and cited his political experience, dating back to 1970 when he was first elected to St. Catharines city council, followed by his election to the provincial legislature in 1977 where he remained an MPP until he finished third in the recent provincial election. Bradley said people are looking for a new era at the Niagara Region. While he admitted being a partisan politician for 41 years, he feels he has good relationships with both the federal and provincial governments.

Foster was next to give his remarks. He talked about improving collaboration in the council chambers, making economic development and tourism a priority and improving upon infrastructure. He said there is no room for partisan politics at the municipal level and cited his 18 years experience as a town councillor in Lincoln.

Villella took to the podium stating this vote for chair will dictate how the next four years will go. She too talked about there being no room for partisan politics and her desire to tackle social issues like housing and addiction services while helping small businesses and growing the economy. Villella said that people voted for change and that is what they expect.

Surprisingly, Villella’s south Niagara colleagues, Welland’s Pat Chiocchio and the city’s mayor, Frank Campion, turned their backs on Villella and voted for Bradley as did Port Colborne’s Bill Steele and Barbara Butters. Sandie Bellows was the lone female councillor to vote for Villella.

Councillor Darte began the very cordial question and answer session by asking three questions that included their thoughts on term limits, a one Niagara city and too many politicians in Niagara. Diodati asked about their commitment to continuing the Region’s push for GO train service while Sandra Easton, asked what their redeeming qualities are that separate them from their fellow nominees.  For the most part candidates all answered the questions very similarly and agreed with each other’s responses. Councillor Diana Huson of Fonthill voted for Bradley and said she wasn’t surprised the nominees tended to agree with each other given most councillors seemed to be on the same page on many issues during discussion in orientation sessions. Huson said while she was leaning towards Bradley heading into the meeting, she was open to changing her mind if; “someone else really blew me away”.

Council now has to hit the ground running on several contentious issues as well as continue to lobby the provincial government for funding on important projects like GO transit and a new hospital. Time will tell if council made a strategic misstep in electing a veteran Liberal politician as chair who will have to deal with an equally partisan Premier.

Here’s how they voted:

By Kevin Vallier Time To Read: 3 min
National What is the UN Global Compact? (Part 1 of 2)
Sports Badgers bring Christmas cheer to kids in hospital…