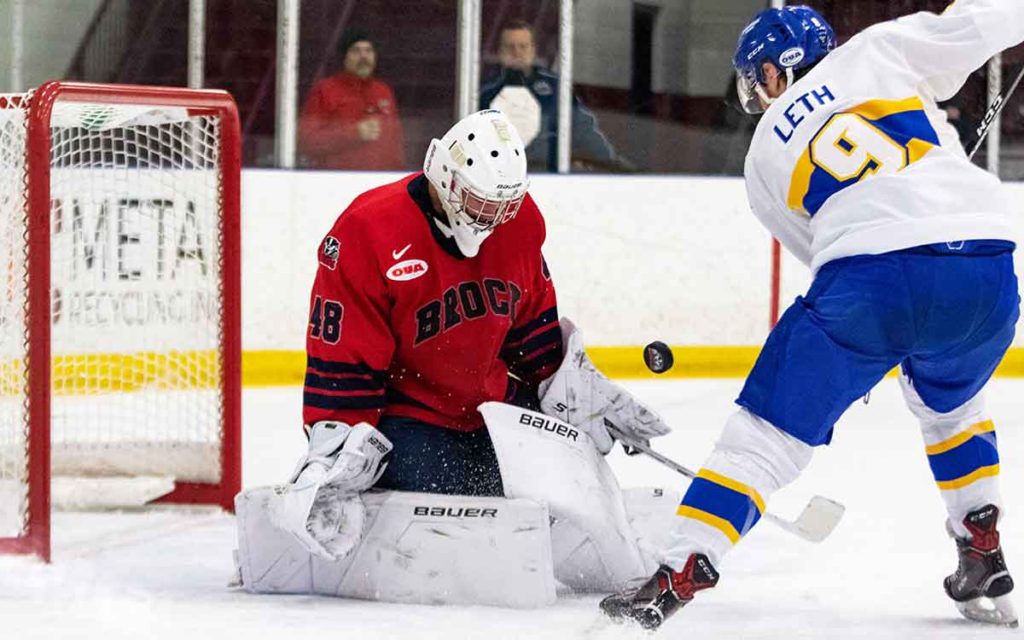 Goaltender Logan Thompson of the Brock men’s hockey team denies a breakaway from Cavin Leth of the Ryerson Rams at Seymour-Hannah Arena this past Saturday. Supplied photo.

The Brock Badgers men’s and women’s hockey programs enjoyed a strong first half to the OUA season and have begun the second half equally as impressive.

The men’s hockey team climbed into the national rankings a handful of times during the first half of the campaign. They roared out of the gate with four consecutive wins and currently sit with one of the lowest goals against in the league.

This past Saturday Brock was back in action as Ayden MacDonald scored the game-winning goal and the Brock Badgers slipped by the York Lions 4-3 on the road. The Badgers have now won four consecutive games.

“We had a great third period to find a way to win.” said head coach Marty Williamson.

The previous night, the Badgers kicked off 2019 with a bang by beating the visiting Ryerson Rams by a score of 5-0 at the Seymour-Hannah Arena. Goaltender Logan Thompson made 39 saves to record his third shutout of the season.

“We’ve had a very positive first half. We have 14 new players and team chemistry is a strong point for us. We are a very unselfish team,” said Williamson. “We need to grow our special teams, especially our power play to make us a well-balanced team. If we continue to play for each other and understand our systems we will be a tough team to play against in the second half.”

The Badgers improve to 14-5 for first place in the OUA’s West Division after their back-to-back wins over Ryerson and York.

Meanwhile, the Brock women’s hockey team exploded for four goals in the third period to sink the York Lions 6-3 at Seymour-Hannah Arena on Saturday during their first game since the holiday break.

The women’s team opened the first half of their season with back-to-back wins and worked their way back from deficits to string together four consecutive victories in November. They have one of the top power-play units and second best save percentage (.943) in the league.

“We are feeling decent about the first half of the season,” said head coach Margot Page. “We have four of 12 forwards and four of six defencemen playing regular minutes that are first-year players and we are above .500, which is not too shabby.”

“Moving forward we need to look after the puck. It’s like a hot potato out there sometimes. Quite often we make the puck someone else’s problem. We have to calm down and make positive plays in all zones. We need to also find a way to play with the same urgency in the first period compared to the way we play when we are behind in the third period. Those two things need to happen if we want to make playoffs again this year,” added Page.

Whiteye, a first-year Business student from Thamesville, Ontario, scored back-to-back goals within 20 seconds to help the Brock Badgers defeat the York Lions 6-3 in their first game since the holiday break. Whiteye scored during a short-handed rush midway through the third period and once again on another rush shortly after. She is third on the team in scoring with four goals and seven points in 13 games. Two of her markers have been game-winning goals.

Thompson, a first-year Social Sciences student from Calgary, Alberta, backstopped the Badgers to back-to-back wins as he made 36 saves to shut out the visiting No. 6 Ryerson Rams 5-0 at home during their first game of 2019 and 32 saves during a 4-3 win over York on the road Saturday. Thompson is fourth in the OUA with a .934 save percentage and fourth in win percentage (.813).

Tickets for the Brock Badgers home games can be purchased at brocku.universitytickets.com. 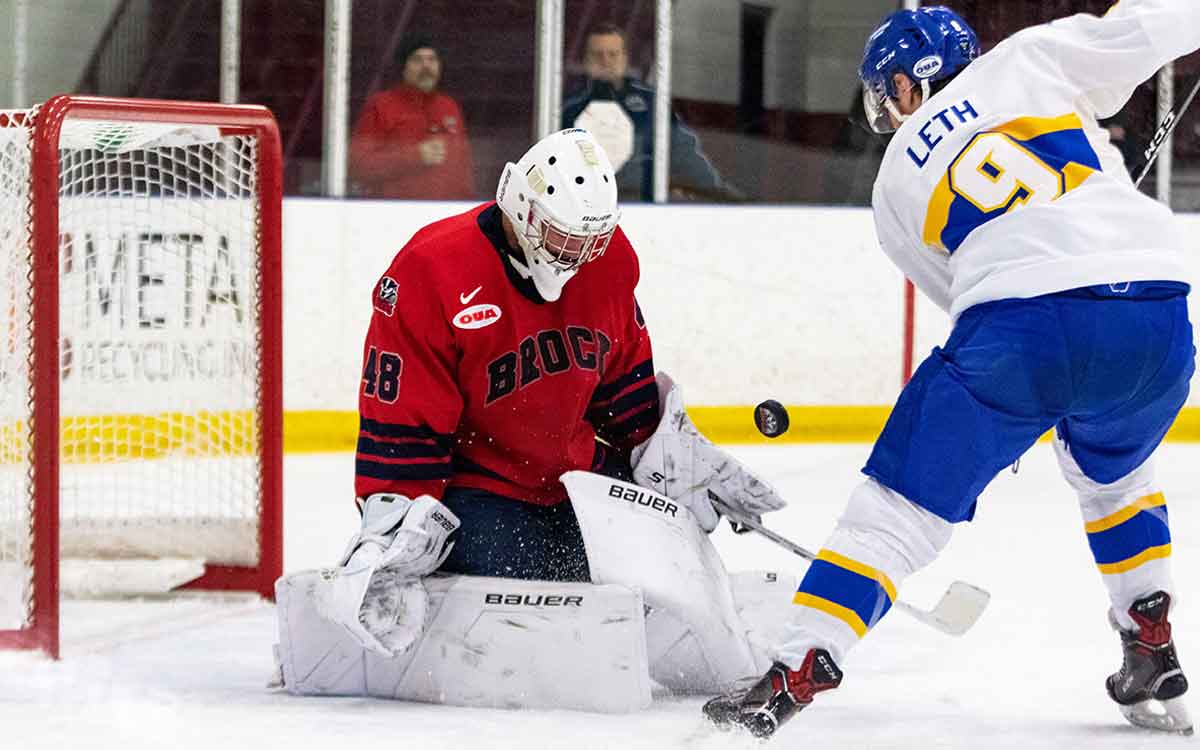