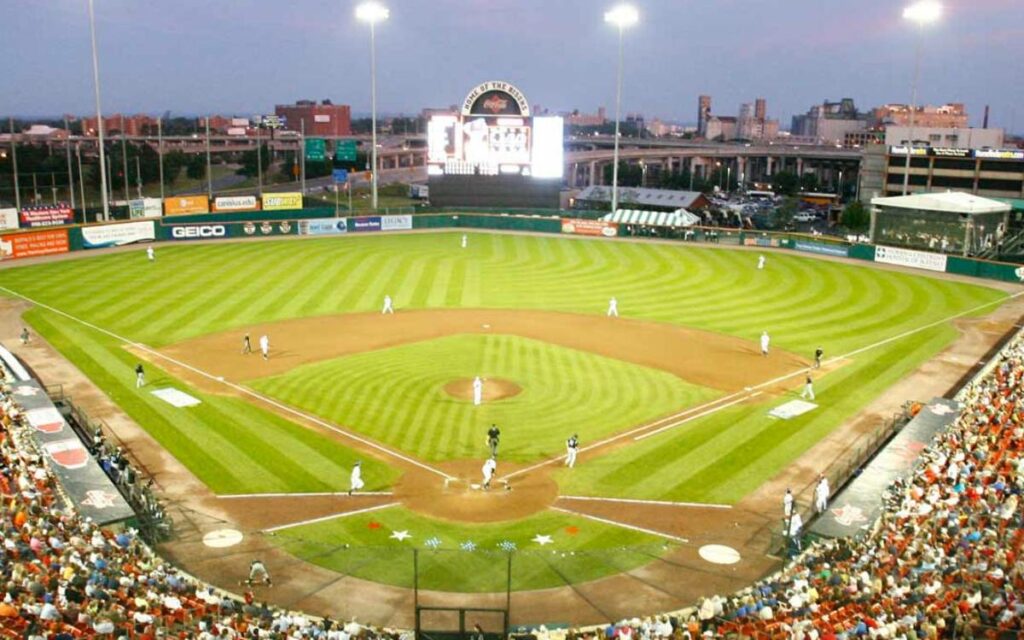 It’s hard to believe that the Buffalo Bisons are entering their ninth season of affiliation with the Toronto Blue Jays.

Founded in 1979, the Bisons have previously served as an affiliate for the Pittsburgh Pirates, Cleveland, Chicago White Sox and the New York Mets.

“We are very excited to continue our strong partnership with the Toronto Blue Jays and are looking forward to an expanded relationship with Major League Baseball that will help us grow the game of baseball together,” said Bisons General Manager Anthony Sprague,

“Through our affiliation with the Blue Jays, we have been able to showcase many exciting players on their way to Toronto while also providing great family entertainment and value to baseball fans throughout Western New York and Southern Ontario.”

The Bisons regularly draw hundreds of fans from the Niagara Region, and average just under 8, 000 fans per game to beautiful Sahlen Field in downtown Buffalo.

I mentioned the ‘Triple-A East’ above and that’s where things get interesting in terms of the number of teams and affiliations now in the Triple-A loop, and minor league baseball as a whole.

Digest this for a moment:

There will be 25-percent fewer minor league teams than there was at this time last year.

43 teams lost MLB affiliation. Two were Double-A clubs, while the other 41 were Single-A or lower.

The New York Penn-League, founded in 1939 and which featured teams in St. Catharines and Welland in the past, completely ceased operations.

Here’s the new breakdown of just where and whom the Bisons will play in 2021.

As a member of the all-new Triple-A East, the Bisons will be a part of a 20-team league that will include 12 other members of the former International League, four teams from the former Pacific Coast League and three new teams to the Triple-A level. The Memphis Redbirds (Cardinals), Nashville Sounds (Brewers), Iowa Cubs (Cubs) and Omaha Storm Chasers (Royals) join the league from the PCL. The Bisons played against Nashville, Iowa and Omaha in the late 1980s and early 1990s as members of the American Association.

The formerly independent St. Paul Saints are the new Triple-A affiliate of the Minnesota Twins and the Jacksonville Jumbo Shrimp (Marlins) have been elevated from the former Double-A Southern League. The Pawtucket Red Sox relocated to Worcester, MA after the 2019 season and will have their inaugural season as the Worchester Red Sox (Red Sox) in 2021.

The league has been divided into three divisions (Northeast, Midwest and Southeast) with the Bisons Sharing the ‘Northeast Division’ with Rochester, Syracuse, Lehigh Valley, Scranton/Wilkes-Barre and Worcester.

The Bisons will officially open their regular season April 6 at home against interstate rival the Rochester Red Wings, and play a 142 game schedule

As of now, games will be played with no fans in attendance.

So while the historic New York-Penn League, which featured the St. Catharines Blue Jays, St. Catharines Stompers and Welland Pirates at one-time, no longer exists – thankfully (during non-Covid times) we’re just a short car ride away from attending high level baseball with the Buffalo Bisons.