Canada at a crossroads, as Poilievre positions himself to be country’s next prime minister 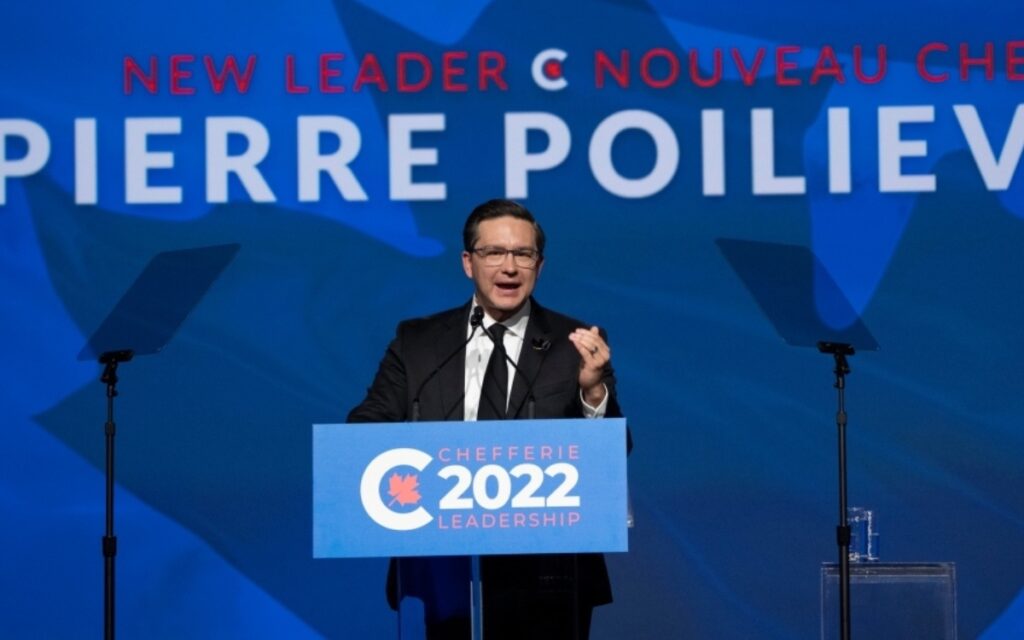 The sky is still blue, and so is the Conservative Party of Canada.

After what can only be described as the most lackluster leadership in recent memory, Pierre Poilievre has been anointed King of the Tories. But now that he has captured the hearts of CPC members, can he do the same with the rest of the Canadians?

In a recent survey by Abacus Data, the then leaderless Conservative Party was trailing the Liberals by one point, which is within the margin of error from the results of last year’s federal election. Poilievre’s popularity has remained consistent throughout the race in the 20-22 per cent range, while his negatives went from 22 per cent at the start of the race to 27 per cent. Whereas Prime Minister Justin Trudeau is hovering around a disapproval rate of 50 per cent, one of the highest points since he took office in 2015.

With the leadership race decided and a dominant performance by Poilievre, his focus will now shift to defeating Justin Trudeau and the Liberal Party in the next election. Unlike his predecessors, Andrew Scheer and Erin O’Toole, who only nearly won their leadership races, Poilievre has a party that is as united as the Conservative Party can be behind a leader and are hungry to return to government.

As his predecessors learned, it is much easier to win a leadership race than it is to win a general election. The issues that matter to card-carrying Conservatives are much different from that of the average Canadian. To his credit, Poilievre is quick on his feet, able to deliver a good soundbite and is effective in throwing his opponents off their game. Though one challenge he will face is his tone.

His repeated attacks on Canadian institutions, like the Central Bank, are not likely to sit well with most Canadians. Broadly speaking, Canadians trust these types of institutions more than they trust politicians. Using the Governor of the Bank of Canada, Tiff Macklem, as a battering ram to knock down the Liberals on rising inflation and the cost of living may only go so far.

Though this is not the first time that a Conservative leader has used a public figure to beat their opponent over the head WWE style. During the 2018 Ontario election, the CEO of Hydro One, Mayo Schmidt, was nicknamed “the six million dollar man” by Doug Ford and was blamed for the rising cost of electricity, which was a hot button issue at the time. During the election, Ford promised to fire the CEO if elected. However, before Ford could deliver on his promise, the CEO resigned and the cost to replace him was exceptionally high.

Blaming a non-partisan civil servant doing his or her job makes for great politics but rarely makes for good policy. Given the complexities of Canada’s banking system and monetary policy, political leaders should push for good policy and leave the politics out of it. There are plenty of people to blame for the current affordability crisis that many Canadians are facing and now is the time for discussion on policy and not pointing the finger at someone who cannot defend themselves without jeopardizing their neutrality.

There is a real opportunity for Poilievre and his Conservative Party. Canadians are getting tired of the not so sunny ways of Justin Trudeau and his government. The next election will be a real test of the Trudeau brand and his (likely) decade of power.

Canadians will be looking for solutions to the problems that they are facing every day and not name calling. With the economy on track to tank like the 2008 Detroit Lions, now is the time for the Conservatives to present real ideas that will make an impact. Not just a tax credit here and there, but new and innovative ideas that will address the cost of living. So, the single mom with two kids does not have to decide between buying school supplies or food for that week.

Canada is at a real crossroads and needs leadership. A Pierre Poilievre led Conservative Party could be the solution. Now is the time for proper policy and not more name calling.