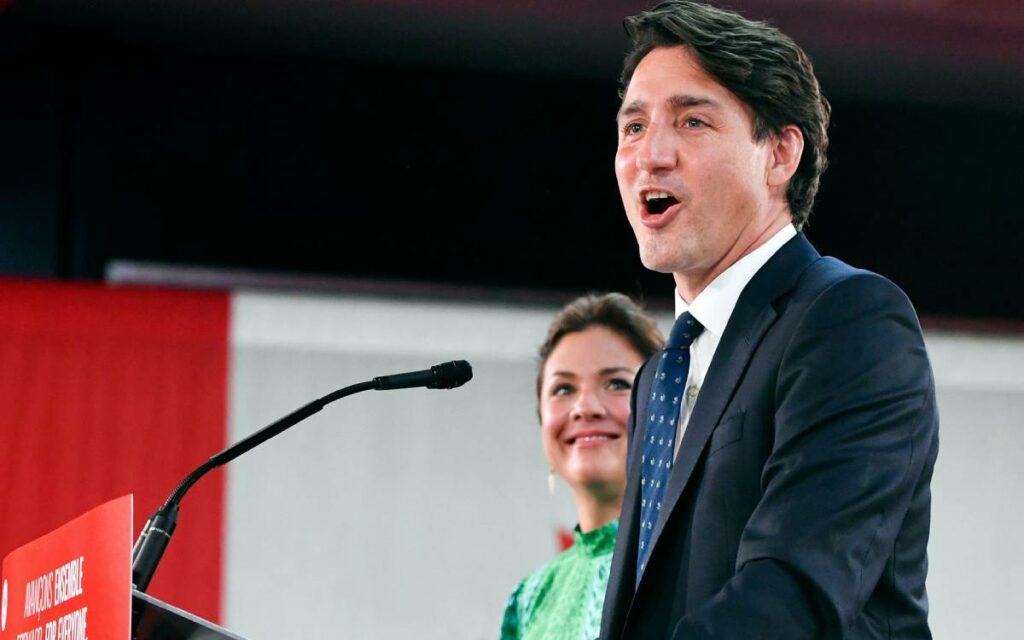 With wife Sophie, a newly re-elected Justin Trudeau gives his victory speech in Montreal following the 2021 federal election – an election that ended up a near-mirror image of its predecessor from 2019. Photo credit: EPA-EFE/Eric Bolte

Political pundits referenced titles of popular movies and TV shows in an attempt to make sense of Canadians’ most recent exercise in democracy. The 44th federal election was labelled “the Groundhog Day election”, “the Back to the Future election”, and “a Seinfeld election”, due to the fact that after a 36-day campaign Canadians were staring at results that were almost a mirror reflection of the political parties’ standings in the previous parliament.

On election night, the re-elected Prime Minister Justin Trudeau claimed, “You are sending us back to work with a clear mandate to get Canada through this pandemic and to the brighter days ahead. What we’ve seen tonight is that millions of Canadians have chosen a progressive plan.”

The PM talking of “a clear mandate” and citing the endorsement of “millions of Canadians” is a distortion of the electoral results.

The fact is that Justin Trudeau has been returned to Ottawa and the Prime Minister’s Office with the least amount of electoral support ever in the history of Canada. Trudeau’s Liberals received 32.5 per cent of the popular vote – less than one in three people who cast a ballot chose to vote Liberal. The Monday vote continues a downward trajectory of support for the Liberal brand. Canadians’ support for the Trudeau Liberals has fallen from the high of 39.5 per cent in 2015 and 33.1 per cent registered in 2019.

On Monday night the Conservatives won the popular vote, garnering more than 5.6 million votes compared to 5.4 million for the Liberals.

The actual total votes cast was dismally low in this election. Elections Canada reports, with 99 per cent of polls accounted for, only 58.8 per cent of eligible voters got out to vote. Two in five Canadians did not bother to exercise their franchise. This figure matches the lowest turnout in the history of Canadian federal elections – which was in 2008.

When considering there are approximately 30 million Canadian voters, only one Canadian in six of eligible voters cast their ballots for Trudeau’s Liberals.

Yet, with the total number of seats in the urban and suburban areas of Toronto, Montreal and Vancouver, the Liberals were able to secure a comfortable minority government. In looking at those three cities, the Liberals swept all 25 seats in Toronto, 17 of 18 seats on the island of Montreal, and 15 of 23 in Vancouver.

However, Liberal support in these urban centres does not reflect their support across the respective provinces. Consider these numbers:

The numbers tell us of a divide in the country between urban and rural voters and a divisive electorate that has only a sixth of Canadian voters supporting the governing party. Still, the Liberals have formed government and Justin Trudeau remains Prime Minister.

Gerald Butts, Trudeau’s best friend and Liberal backroom operative, took to Twitter this week to crow about the Liberals’ election strategy that delivered this result. Butts revealed that in the last few elections the Liberals have employed a specific method to maximize the vote efficiency in urban centres. Their tactics are dependent on vote-splits within the first-past-the-post electoral system (a system that Trudeau pledged to change in 2015 with his promised electoral reform).

In a series of tweets, Butts asserted, “If popular vote were the objective, campaigns would optimize for it…We count seats, not votes, so smart campaigns focus on delivering them…Politics is about delivering power to parties now; it’s no longer about serving the electorate. Your position of power simply because you know someone and rode the coat tails of their “brand” shows that to be the trend…Vote efficiency isn’t accidental.”

And in assessing the Liberals’ success, Butts gave credit to another of Trudeau’s boyhood friends, “All three Trudeau Liberal campaigns were among the most efficient in history. The unsung team of super geniuses put together and led by Tom Pitfield (@tompitfield) at Data Sciences deserves a lot more credit than they’ve ever received.”

Butts even went on to suggest the Liberals would have won elections earlier than the 2015 campaign had he and Pitfield been able to employ their election strategy. Some may describe politics as a blood sport, but for Butts and Pitfield it is a game of numbers.

Other notable numbers from election night:

Finally, here is a number that is irritating given the senselessness of what just happened. The 44th federal election was the most expensive in Canadian history: costing taxpayers at least $612 million.