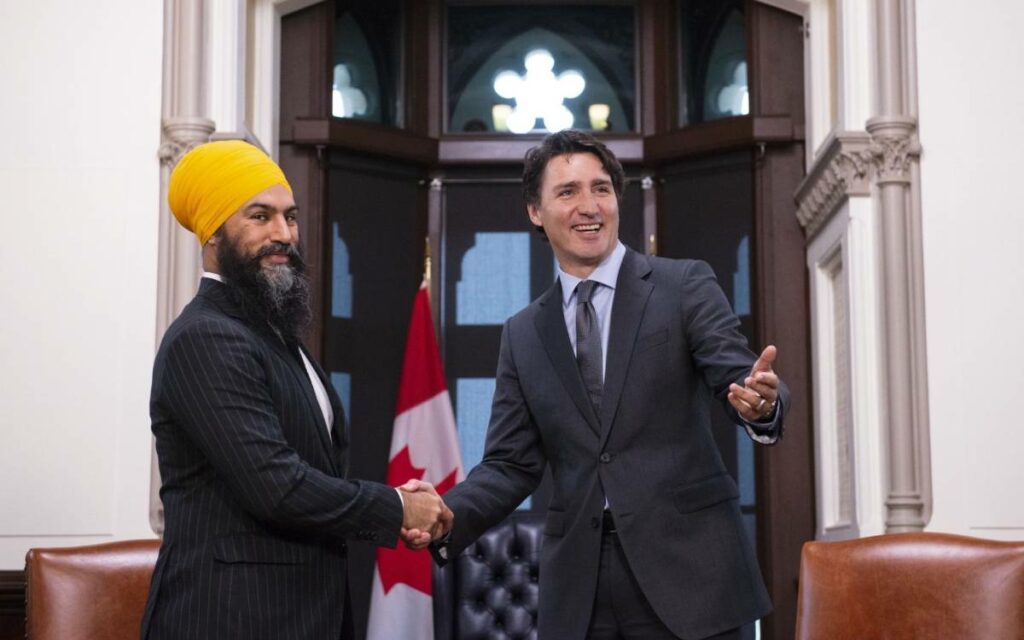 Striking a deal with the NDP may have seemed like a good short-term solution for the federal Liberals, but it may prove to be their undoing. Photo credit: The Canadian Press/Sean Kilpatrick

The recent consummation of a deal between the federal Liberals and the NDP has generated significant speculation across the country. However, many trusted sources see this development as relatively unsurprising and of minor consequence.

Chantal Herbert, a member of the CBC At Issue panel, indicated that the NDP last formed an agreement with the Liberals under Paul Martin and Jack Layton, which quickly turned on them when the Sponsorship Scandal erupted. Others have noted that these deals are a regular occurrence for parliamentary democracy. Moreover, if election reform were to be adapted, it would become as standard in Canada as it is for Israel, Italy, and many other democracies. These arguments may have merit. However, Canada is not a small country with chiefly similar concerns across the nation.

An agreement between the Prime Minister and the third party is worthy of critical analysis. How will it be seen in Western Canada? What will it mean for provincial voters who like a check on the federal government? What will the pressure for further government spending place upon an economy already in a state of crisis from the pandemic, inflation, and a war in Europe? How does the deal transform Canadian leadership on the international stage?

The energy industry, specifically the business of fossil fuels, is mostly located in Western Canada (although many related jobs also exist in Central Canada). The idea that Canada can transition from reliance on fossil fuels in less than a decade has always been a pipe dream. This alliance will force Prime Minister Trudeau to accelerate efforts to end this dependence. Further alienation of western workers is inevitable.

The phrase “all politics is local”, was a favourite rejoinder of former US House Speaker Tip O’Neill. If the Liberals think there is benefit in shifting Canada to renewable energy faster, rather than incrementally, they may find embracing the left to appease a climate-focused base to be a regrettable move.

Nuanced thinking is necessary. The loss of seats will be a minor problem compared to the national unity questions that could arise. The Liberals need to prepare for a potential split in this erstwhile union, leading to a recession, and a corresponding collapse of their chances to retain power in 2025 (or earlier).

The Liberals could also encounter a maelstrom of problems with the provinces. Voters often reverse their voting choice in provincial and federal contests. This action is taken to register disapproval of policies promoted by corresponding levels of government, or merely to remind those in power that they serve at the pleasure of the voter, not the other way around.

Looking ahead, we will likely see provincial Conservative governments retain and/or return to power. Doug Ford was already the favourite heading into his June bid for a second mandate. It is now exceedingly likely he could achieve a renewed majority.

Currently, there are only two left or centre-left provincial governments in Canada. This will harden the Conservative position and could make it more difficult for Mr. Trudeau to strike deals, advance a positive message or realize important partisan initiatives. This challenge has become especially difficult as he prepares to battle for National Dentalcare and Pharmacare.

These programs may seem popular, but they are costly. Where do the cuts come to pay for them? Or does raising taxes sound like a solution? Not all Liberals, never mind independents, are comfortable with the Marxist proposal to make the rich pay. This is especially unattractive when your partners think the rich make $100,000 a year.

Now, onto the next problem… this new partnership will further aggravate excessive spending. Inflation and interest rates are already pertinent issues. If they are not handled properly, they will linger and cause long-term problems for the government and the nation. The best lesson we have is how President Reagan and his Chairman of the Federal Reserve (appointed by President Carter), Paul Volker, strangled inflation and drove down interest rates in the 1980s after they had ballooned into something called stagflation in the late 1970s.

As the present US Administration battles this dilemma, resulting from increased government investment, so too will Canada. The problem will get far worse if the NDP forces the Liberals into printing more money to fund programs. This is not a sound economic policy for these hard times. The Liberals could find themselves in an electoral desert if they pursue such an ill-advised practice after a slew of spending due to the pandemic.

Finally, there is the issue of defence policy. Over the past few months, the free world has watched with horror as the Russian military has conducted an imperialistic invasion of the sovereign state of Ukraine. As authoritarian governments increase in might, the rules-based international order faces an existential threat. In the years ahead, multiple sobering scenarios, ranging from a series of regional conflicts to another world war, could become reality.

Canada is not expected to maintain a military that is the size of Great Britain, France or the USA. However, Canada owns vast northern territory with unparalleled natural resources. Our north is also home to the majority of our Indigenous peoples. We have a moral responsibility, to ourselves and to the world, to ensure we have the tools and capabilities to defend this inalienable component of the Confederation. We must also be adequately prepared, if and when the need arises, to come to the defence of our Atlantic and Pacific allies.

Following the 1961 dissolution of the CCF into the NDP, the party has opposed virtually every military mission in which Canada has been a participant. In fact, at the party convention last year, members proposed adapting a policy initiative that would abolish the Canadian Armed Forces.

The vast majority of Canadians see NDP military persuasions as incredibly naive and impractical. After all, the best healthcare, education and economic opportunities in the world are of little value to a nation that cannot defend its land and citizens from tyranny. Canada now has a government, however, in which this very party holds the balance of power.

In conclusion, this coalition-lite, of sorts, may not have received much scrutiny from a favourable Canadian press corps, nor much concern from academia, or the intelligentsia who are usually consulted. Nonetheless, it should be taken as a serious, potential turning point in Canadian politics. We are witnessing the Liberal Party of old, once a perennial destination of businessmen, military leaders and the sharpest minds of the enlightenment tradition, taking a gigantic step toward embracing socialist utopianism. The Prime Minister appears to believe that this monumental gamble will pay his team dividends in the long run. He may be in for a surprise.