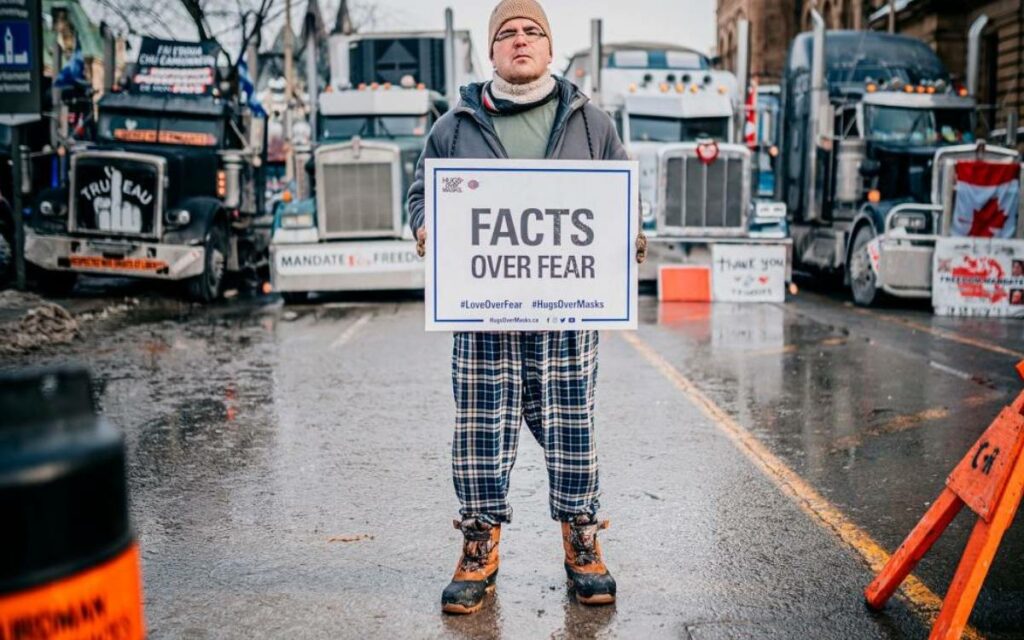 The truckers’ protests – and all the lies that were and continue to be told about it – spotlighted the growing chasm between the so-called elites in government, academia and the professions whose lives are comfortable and secure, and the lower- and middle-class working Canadians who are being buffeted by inflation, housing unaffordability, high taxes and other factors that make their lives less secure. Photo credit: CNN

The recent truckers’ convoy shone a light on the divisions within Canada, and the fact that the divisive politics being practised by the federal Liberals are succeeding all too well. It was not surprising that the Trudeau government and some left-leaning provincial governments chose to respond to the protest by concocting a series of lies instead of acknowledging there are some major problems brewing that deserve serious attention.

The extent of the lies is only now beginning to be revealed. Likely the first untruth was claimed by Prime Minister Trudeau himself, making the derisive statement even before the convoy reached Ottawa that the participants were a “fringe minority” with unacceptable views. There is no doubt that the convoy had the support of a significant number of Canadians, illustrated not only by the number of people actually at the protest but also the thousands who lined highway overpasses across the country to wish the convoy well and by the large numbers of people that made financial contributions to support the convoy.

It was certainly made clear that while the views of the majority of convoy participants may have been “unacceptable” to Trudeau, they were actually quite popular with many Canadians. Public opinion polls showed that about half of Canadians were sympathetic with the goals of the convoy, although they might not have been in agreement with the tactics used. Younger Canadians were especially supportive of the convoy’s goals. At the start of the protest, Trudeau likely had a chance to make a major and constructive change in the direction of the protest by at least showing he was willing to listen to the grievances, if not agree. Instead, Trudeau opted for the more divisive and negative route of dismissing the truckers out of hand and personally insulting them.

Indeed, it seemed like Trudeau and many of his colleagues looked down on the average working people that made up the vast majority of the protestors, even though it was many of these folks who had worked hard to ensure Canadians continued to enjoy regular deliveries of food and other essential goods throughout the two years of the pandemic. To say the least, it was ironic when, on his recent photo-op tour of Europe, Trudeau made comments on the importance of listening to those you disagree with – something he doesn’t seem to do much of himself.

Another key lie was that the goal of the convoy was to overthrow the government. Although there was some amateur-hour statement from some convoy participants that involved convincing the Governor General to have the government step down, anyone paying attention to the majority of convoy participants would conclude that getting rid of the vaccination mandate on cross-border truckers was the key unifying objective, and that “freedom” was the most often heard rallying cry.

More recently, an absurd claim was made by Liberal Minister of Public Safety Marco Mendicino that the protesters had threatened Ottawa residents with rape. This outrageous charge has no factual base or law enforcement charges laid to support it. In the end, it appeared to be a desperate attempt to justify the imposition of the Emergencies Act.

The absurd invocation of the Emergencies Act was really an admission of the incompetence of police and other government agencies to deal with the protest in a less extreme manner, as the circumstances certainly did not justify such an overreaction. The incompetence of government, the police and others in Ottawa shown during the convoy was reminiscent of the massive incompetence of governments at all levels during the pandemic. Taxpayers pay a great deal for government in Canada, and these continued events demonstrating how little value we receive for all the funds spent should raise serious questions in the minds of average Canadians.

And speaking of the Emergencies Act, a number of legal challenges have been mounted to challenge its imposition. Although those cases have yet to proceed, one of the organizations involved, the Canadian Constitutional Foundation (CCF), recently noted a very worrisome trend arising from the drastic measures that were undertaken by the Trudeau government under the Emergencies Act. The CCF has noted they are receiving many comments from average Canadians who have expressed their support for the CCF’s opposing the Act’s imposition, but who are afraid to donate or offer support publicly because they fear extreme reprisals such as a freezing of their bank accounts or other overly punitive measures.  This type of chill put on free speech in a so-called democracy is disgraceful and has no place in Canada.  Yet, thanks to the unwarranted overreaction of the Trudeau government, here we are.

Despite all of facts that counter the government claims, Trudeau and his colleagues continue to promote the fiction that the trucker convoy was essentially domestic terrorism. Even the deputy director of FINTRAC, the federal agency that oversees the financial system, stated before a House of Commons committee that financial support for the convoy was not terrorism or money laundering. Another enduring myth is that the convoy was largely supported by funds coming in from outside the country to destabilize Canada. Yet once a factual assessment of the donations had been made, it was clear that the majority of the donations had come from within Canada, typically in small amounts.

Trudeau’s approval rating has suffered a serious hit in the wake of the convoy and his handling of it, so Canadians do not seem to have been fooled by all of the dishonesty and obfuscation. In fact, many have speculated that Trudeau’s recent European junket was an attempt to rehabilitate his image by associating himself with the Ukrainian cause that deservedly has so much support in Canada.

There can be no doubt that the truckers’ convoy protest was very disruptive to Ottawa and lasted too long. But other protests have done similar things and not faced the same extreme reaction from officials, not to mention the over-the-top invocation of the Emergencies Act.  At the same time the Ottawa protest was winding up, a truly violent event took place in northern BC at a Coastal GasLink site where people’s lives were threatened and millions of dollars of equipment were destroyed. Yet no Emergencies Act was invoked, and the perpetrators have still not been apprehended, seemingly as the protesters in this case were likely environmental activists whose goals are acceptable to the powers that be.

The unequal application of the law to different groups depending on the “wokeness” of their topic of protest is despicable and more an aspect of authoritarian regimes than a supposedly free, democratic country.

Canada’s current two solitudes do not involve language issues or federal-provincial disputes, but rather the growing chasm between the so-called elites in government, academia and the professions whose lives are comfortable and secure, and the lower- and middle-class working Canadians who are being buffeted by inflation, housing unaffordability, high taxes and other factors that make their lives less secure.

The pandemic has worsened these divisions, yet many politicians remain in denial. Following last year’s federal election and its demonstration of just how divided the electorate was, Prime Minister Trudeau stated that in the wake of his weak victory, he didn’t see divisions in Canada. Whether he was lying or actually believed that falsehood remains to be seen. But looking ahead to the next couple of years with a number of provincial elections on the horizon and possibly another federal one, politicians will ignore the profound unrest and sharp divisions within Canada at their peril. 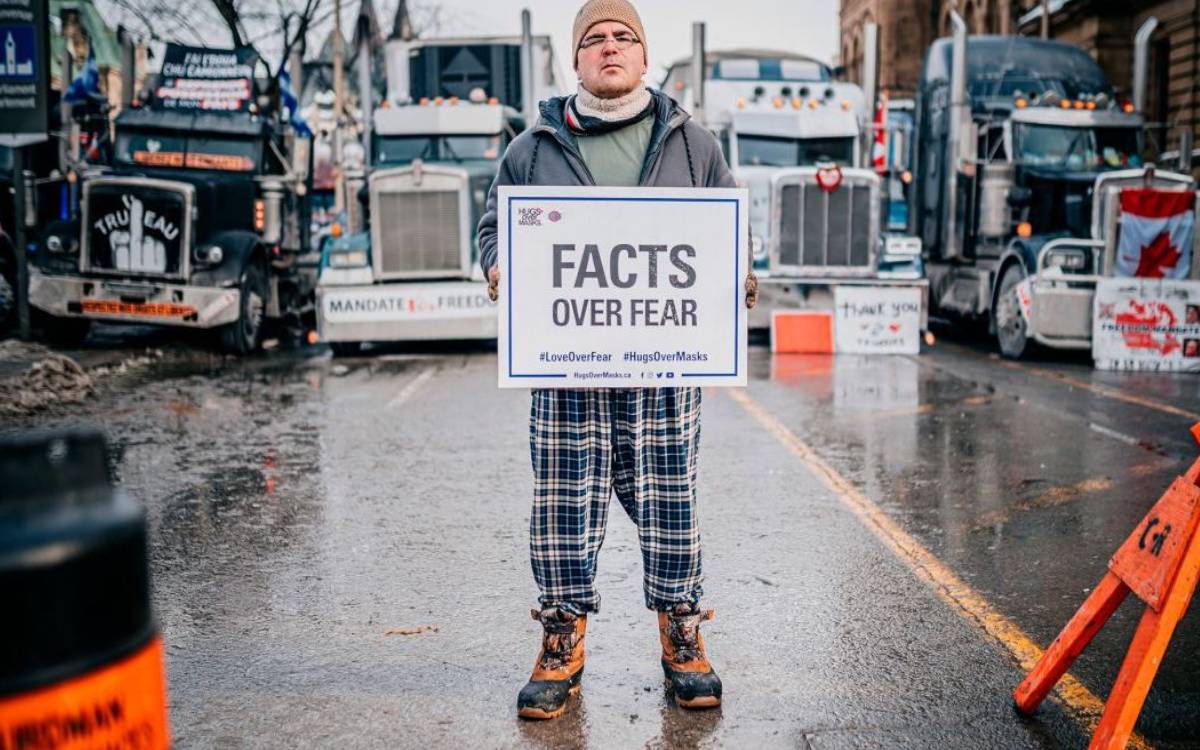