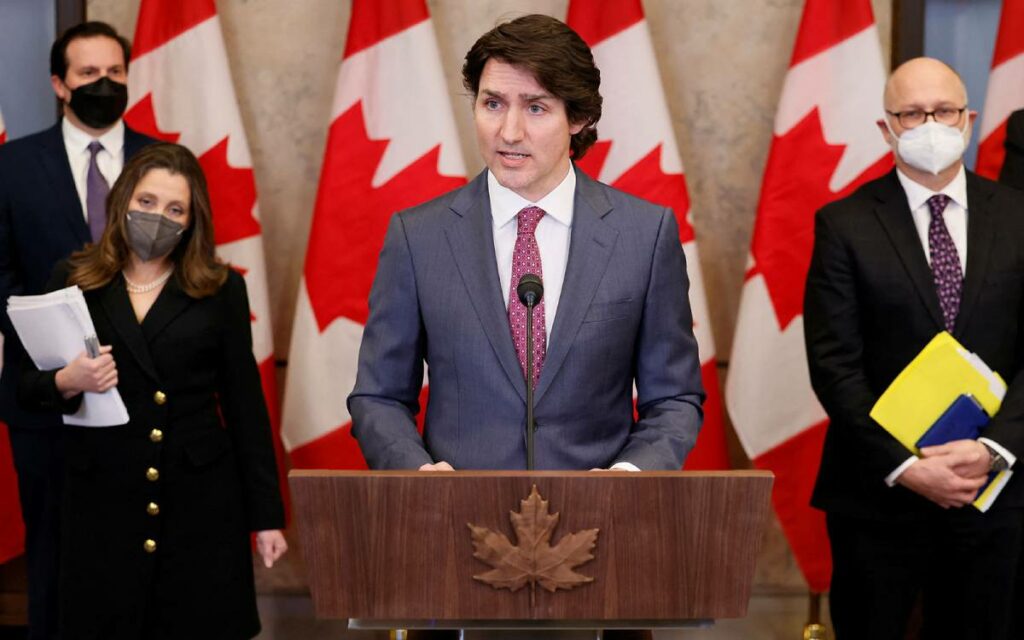 The most troubling aspect of the Trudeau government’s unprecedented action to invoke the Emergencies Act was not the suspension of civil liberties or the assault on Canadians’ trust in its institutions of government, justice, and media, albeit these matters have given all Canadians reason to pause. The most troubling aspect of these past two weeks has been the roller coaster ride Canadians endured with the country’s financial institutions. This wild ride has left many feeling queasy and weak-kneed.

When Prime Minister Justin Trudeau announced on February 14 that he intended to invoke the never-used-before Emergencies Act, he also revealed he was directing banks, credit unions, co-ops, loan companies and trusts to halt business with anyone who was associated with the Freedom Convoy protest. The PM explained this move was being made to cut off all financial resources to the protestors who were refusing to leave the streets of Ottawa.

The government employed financial measures ostensibly designed to combat international criminal gangs and terrorist financing. These expanded powers require financial institutions to provide reports on bank accounts so the government can learn of and track Canadians’ financial transactions, including cryptocurrencies like Bitcoin. Financial institutions were tasked with the responsibility to identify from their client base all “designated persons”; those who “directly or indirectly” have participated in the protest, including people who donated through crowdfunding sites.

Banks were ordered to effectively deplatform Canadians’ financial services which, as CBC reported, would result in “frozen accounts, stranded money and cancelled credit cards.” The PM and Finance Minister Chrystia Freeland conducted press conferences to report that banks were actively freezing accounts. The PM stated anyone who gave large sums of money through GoFundMe and GiveSendGo “should be worried.” Freeland stated those providing funding to the truckers were engaging in illicit activities.

Other ministers and government officials then heightening the rhetoric around the extraordinary measures. For example, Justice Minister David Lametti compared the Ottawa protests to acts of terrorism and, in one interview, warned those who donated to the “pro-Trump movement” “ought to be worried” about their financial assets being frozen. In another media conference interim Ottawa police chief Steve Bell asserted, “If you are involved in this protest, we will actively look to identify you and follow up with financial sanctions and criminal charges … Absolutely.”

Just like the clickety-clack sounds of a roller coaster track as the cars are being hauled up to frightening heights, Canadians were being mesmerized by the government’s hardline narrative. Chrystia Freeland gave a number of animated news conferences. In one she vowed banks would be freezing accounts at “an accelerated pace” and protesters and their supporters would have no means to their assets. She forcibly stated, “The consequences are real and they will bite.”

It was not until MPs began debating the Emergencies Act in Parliament that the full picture emerged of what Canadians were thinking with that roller coaster car suspended at the heights of the ride. As Toronto Sun reporter Anthony Furey described “people are nervous and fearful” and there was worry about “just how wide this dragnet goes” because it appears “it goes as wide as Trudeau wants it to go.” Furey reasoned, “There aren’t any court orders required before freezing people’s bank accounts. Reviews will happen after excesses have occurred.”

Canadians learned of disturbing incidents such as the Ottawa café owner who had to close her doors do to repeated threats after local media reported that she gave food and $250 to the truckers. There were accounts from seniors, business owners – even a single mom – all who had their accounts frozen. And, a farm credit union on the prairies that drew up a blacklist to begin suspending its loans to farm families.

What happened next is a blur. Monday morning headlines of every major news media screamed that “RCMP, banks and Ottawa say convoy protest donors won’t have accounts frozen after viral tweet said otherwise.” Freeland held a news conference in which she suggested accounts would be unfrozen if people simply promised to no longer support the protest.

And just as a rocketing roller car will swing and jolt its occupants, Canadians learned:

The car then came to an abrupt stop and Canadians were told to exit the ride.

But really, what has just happened here? Wednesday afternoon Senator Leo Housakos tweeted out what many Canadians were wondering, “I’d love to think the PM finally did the right thing because it was the right thing to do. But that’s never Justin Trudeau’s motivation. Poll numbers dropped through the floor and a run on the banks.” The Senator added, “Who in their right mind would keep $$$ in a Canadian bank at this point?”

There are many theories that try to reason the swift announcements of Wednesday, everything from the nervousness of the PMO that the Senate would vote down the Emergencies Act to bad polling numbers and international press, to the fact the government had completed their financial data dump and now have the records they were after. There is also conjecture of a link between the government’s financial powerplay and its commitments to reset the Canadian economy (and more on this next week with a look at “The WEF and the Liberals’ agenda for Canada”).

The government’s inexplainable use of the Emergencies Act drew great criticism beyond Canada’s borders. A particularly pointed editorial from the Wall Street Journal is indicative of the stinging indictment of Trudeau’s overreach. The WSJ wrote: “In abusing these powers for a nonemergency, Mr. Trudeau crossed a democratic line… Mr. Trudeau criminalized a protest movement, deputizing financial institutions, without due process or liability, to find and freeze personal accounts of blockaders and anyone who helps them. These extraordinary measures are a needless abuse of power.”

Yes, it was truly a hell of a ride, and it is little wonder some Canadians still feel motion sickness.