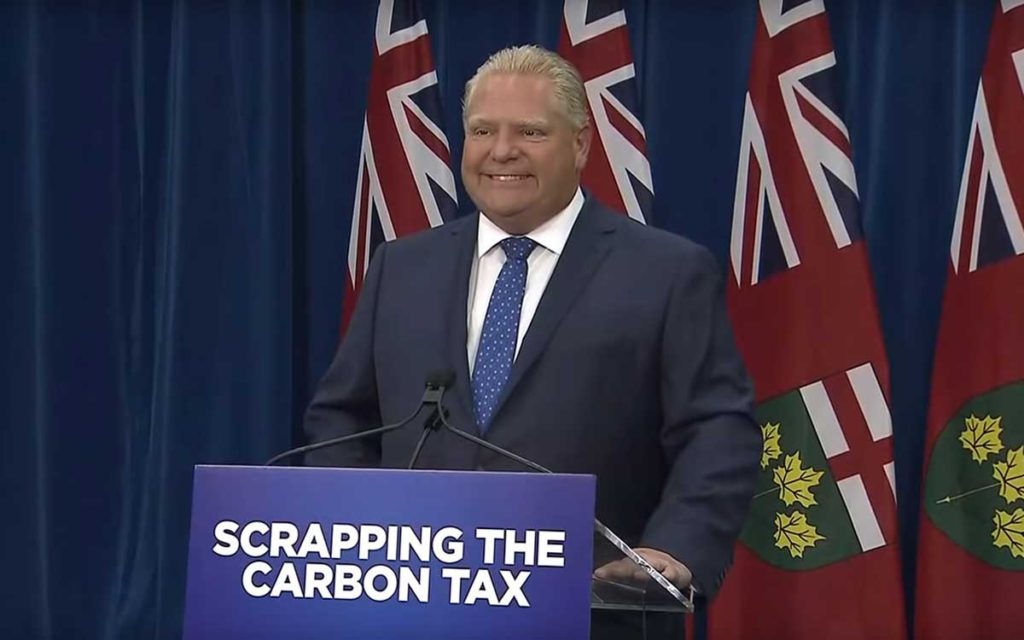 Ontario Premier Doug Ford has made no secret about his thoughts on a carbon tax. His views have been shared by numerous other provincial leaders.

Over the past few weeks, it has become clear that the defining issue of the 2019 federal election will be the carbon tax.  Prime Minister Trudeau is increasingly staking his reputation and that of his government on their commitment to imposing a federal carbon tax on the country, even as a growing number of provinces elect governments who have campaigned on an anti-carbon tax platform.  So, given the high profile this issue will have in the months leading up to the next federal election, it’s a good time to do a recap of where Canada currently stands.

Although Trudeau now claims he was elected in 2015 to implement a carbon tax with the full support of Canadians, the truth is actually quite different.  Trudeau did mention “putting a price on carbon” in the run-up to the election, but was very vague as to any specifics.  Since that time, Canadians in several provinces have seen carbon taxes implemented in a number of different forms.  Having now experienced the reality instead of the pleasantly painless theory, many have decided they don’t like it and have subsequently voted for provincial governments that openly and emphatically oppose a carbon tax.  The election of the staunchly anti-carbon tax Doug Ford government in Ontario this past summer added considerable momentum to this fight.

It is worth going back to basics on the whole notion of a carbon tax and reviewing some of the original  theory.  What the vast majority of carbon tax proponents advocate is a clearly visible tax levied on all carbon-emissions-producing activities in an economy, with the same amount of money collected by the tax refunded to citizens in the form of income tax reductions.  In other words, revenue neutrality.  The whole point of a proper carbon tax is not to raise revenue for the government, but to encourage people to shift behavior away from carbon-intensive activities by taxing those activities.  Unfortunately, all of the Canadian carbon pricing schemes to date have been big revenue generators for government with dubious positive impacts on the environment.

The proposed Trudeau carbon tax accomplishes none of the objectives of a properly structured carbon tax.  At present, it appears that the Trudeau carbon tax will be layered on top of the existing crazy quilt of regulations, emissions standards, subsidies for alternative energy sources and tax incentives that already exist.  A properly constructed carbon tax policy would eliminate all of this regulatory red tape before the imposition of the actual tax.  An added complication in the Canadian context is that there are currently differing regimes in different provinces, which makes it even more difficult to assess the overall impact of these different policies on achieving environmental goals.  It also makes it much more complicated and costly for businesses that operate in more than one province to implement the various policies.

Another reason many Canadians have soured on the concept of a carbon tax is the growing credibility gap between the statements of the proponents of such a tax and their actions.  For instance, the sanctimony of the climate zealots who are all-in on a carbon tax is undermined by their silence on such appalling events as the dumping of raw sewage into our waterways, another episode of which took place just last week in a number of municipalities in Quebec. Many of the politicians who advocate carbon taxation nevertheless spend much of their time jetting around the world instead of using alternate, more climate-friendly means of doing business.  Canadians have become rightly suspicious of these “do as I say, not as I do” politicians and activists.

In the last few days a public opinion poll on which political party had the best plan on climate change showed that about half of Canadians were either undecided or didn’t know.  This skepticism is well-founded considering all of the conflicting bafflegab we have heard and the reality that many governments claim to be pursuing noble climate-related goals while pocketing big bucks from taxpayers with negligible positive effects on the environment.  Unfortunately, the fact that the carbon tax has emerged as a key battleground in the 2019 federal election means that Canadians will be inundated by much more bafflegab in the months to come.  If we could only harness all the hot air that will be coming from politicians on all sides of the issue we could probably help the environment more than any carbon tax ever will.