Carbon Tax on the Ropes 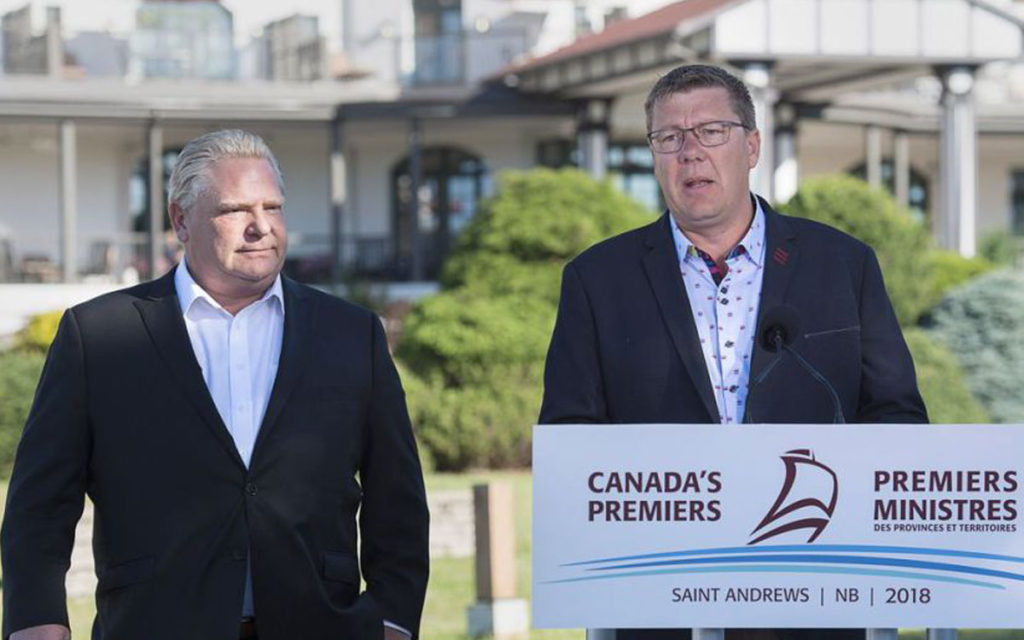 This past week saw a meeting of the “Council of the Federation”, which is a pompous name for the  group of provincial Premiers across Canada who meet from time to time, usually to gang up against the federal government on a range of issues.  And what an interesting meeting it was! It was the first such meeting for new Ontario Premier Doug Ford and his somewhat longer-serving Saskatchewan counterpart Scott Moe, and they wasted no time in declaring their joint opposition to the carbon tax Justin Trudeau is attempting to force on all provinces by the beginning of 2019.

It appears that the carbon tax, so confidently announced by Trudeau a couple of years ago, is in big trouble.  Canadians are realizing they were sold a bill of goods on the carbon tax, and that it has not lived up to any of the promises made by politicians when it was first implemented. The so-called “social license” the carbon tax was supposed to buy and enable the building of pipelines and other economy-boosting natural resource projects has been a bad joke as environmental zealots prove once again that they see no acceptable trade-offs to resource development.  These extremists will not be happy until everyone is beggared by increased taxes on everything in the futile quest to supposedly save the planet.  Other countries around the world who were earlier adopters of carbon taxes than Canada have mostly reversed their position as they realized they had created “energy poverty” among a significant segment of their citizens with little if anything to show for it in terms of improved environmental outcomes.

As for all those “green” jobs that were going to be created by our great environmental policies and massive public spending, they have failed to materialize.  In fact, in most countries that have monitored the situation, they have found that anywhere from 4 to 6 jobs have been eliminated in the conventional economy for every “green” job created.  Experience in Canada and elsewhere has also shown that once heavy government subsidies are reduced or eliminated, the solar panel and windmill industries quickly fold, taking billions of taxpayer dollars with them. The very fact that the Trudeau government is consistently secretive about how they are measuring the impact of their carbon tax should make every Canadian smell a rat.

Currently, the only remaining strong supporters of the federal carbon tax are British Columbia, Alberta and Quebec.  It is very likely that Jason Kenney’s United Conservative Party of Alberta will defeat the current NDP government when an election is held there next spring.  If that comes to pass, Trudeau’s carbon tax is pretty much dead.  Politicians like Doug Ford, Scott Moe and Jason Kenney have very publicly campaigned against the Trudeau carbon tax, and the fact they are clearly supported by most of the voting public cannot be denied.

When he became Prime Minister in 2015, Trudeau boasted as to how he would restore harmonious federal-provincial relations following the supposed horror of the Harper years.  Reality bites.  The majority of the provinces are now fighting with the federal government as much or more as during the Harper years.  The carbon tax issue will be a true test in the 2019 federal election, and at the moment things are not looking good.  This is not to say that governments are citizens should not be making positive changes to truly help environmental matters, but rather that costs and benefits must be taken into account and actual outcomes properly measured and made public.  So far carbon policies in Canada and around the world have been based more on political posturing than fact, and have hurt many more average people than they have helped. The growing storm of opposition among most of the Canadian provinces is a good development for Canadians, and will hopefully lead to environmental policies that actually accomplish something meaningful at reasonable cost instead of just making pontificating politicians feel good about themselves.

Carbon Tax on the Ropes