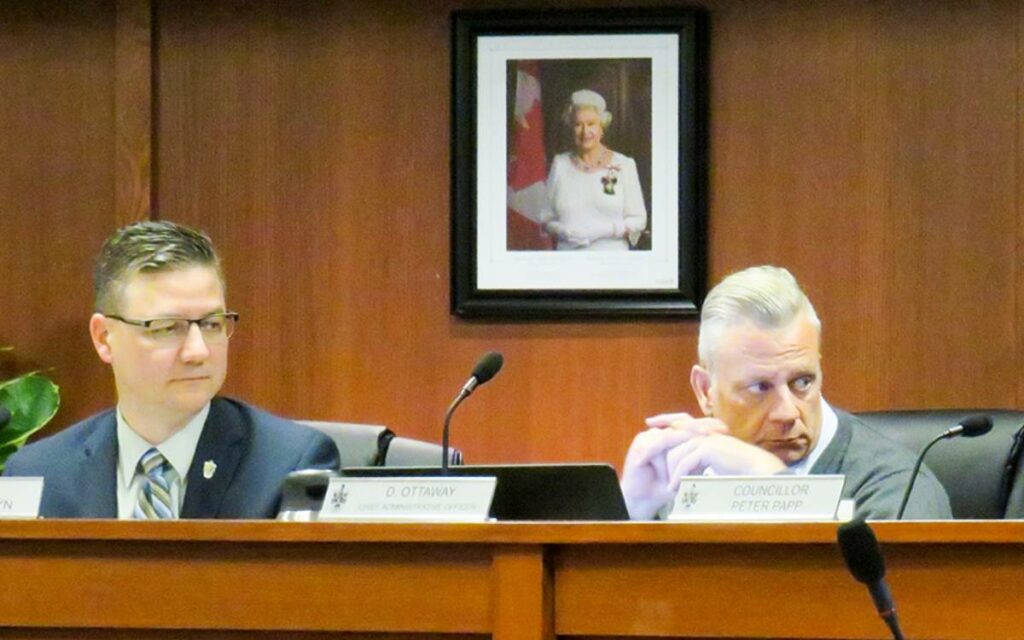 Darren Ottaway (right) sits next to former Pelham mayor Dave Augustyn during a November 2017 council meeting. Ottaway was Pelham’s chief administrative officer from 2012 to 2019 and worked closely with Augustyn to fulfill council’s East Fonthill development plans, including overseeing a controversial land-for-credits scheme. Photo used by permission from the Voice of Pelham.

Former Pelham CAO Darren Ottaway had a court date in Cochrane, ON on February 1 to answer to four criminal charges, some of which are alleged to have occurred in Fonthill prior to his firing in 2019.

Chantal Chenier, Supervisor of Court Operations in the Ministry of the Attorney General in Cochrane, told local media outlet the Voice of Pelham that bail was granted at Ottaway’s initial court appearance on January 24. Ottaway did not appear in court via Zoom on February 1 before Justice David Thomas, but was represented by lawyer Paul Bragagnolo.

A trial date is set for May 17, but Bragagnolo told the court that date “seems a bit far off….I’m optimistic that something earlier can be worked out.” He suggested that “the case should be a very quick and simple matter.”

Bragagnolo was focused on one charge which involved common assault. He said that the other charges stem from acts allegedly committed by Ottaway when he was still resident in Pelham, and accordingly should be tried in this jurisdiction.

Niagara Regional Police spokesperson Const. Jesse Vujasic told the Voice of Pelham that the Cochrane/James Bay detachment of the OPP is the lead on the Ottaway case, and has made no request that charges be defended in a Niagara courtroom. Similarly, the Welland office of the Ontario provincial court said that no request has been received from the Cochrane judge to sever the charges and move the jurisdiction.

Justice Thomas set the next court appearance for Ottaway as March 1, and was receptive to an earlier trial date.

Ottaway is currently employed as the Chief Administrative Officer for the Town of Cochrane, a community of 5000 located south of Moosonee in northeastern Ontario. Cochrane Mayor Denis Clement confirmed last week that Ottaway is still on the job.

Ottaway was hired as Pelham’s CAO in 2012 and worked closely with then-Mayor David Augustyn to fulfill the Augustyn council’s East Fonthill development plans, including overseeing a controversial land-for-credits scheme. Following that council’s defeat in the 2018 municipal election, Ottaway was terminated in early 2019. He did not respond to requests for comment.