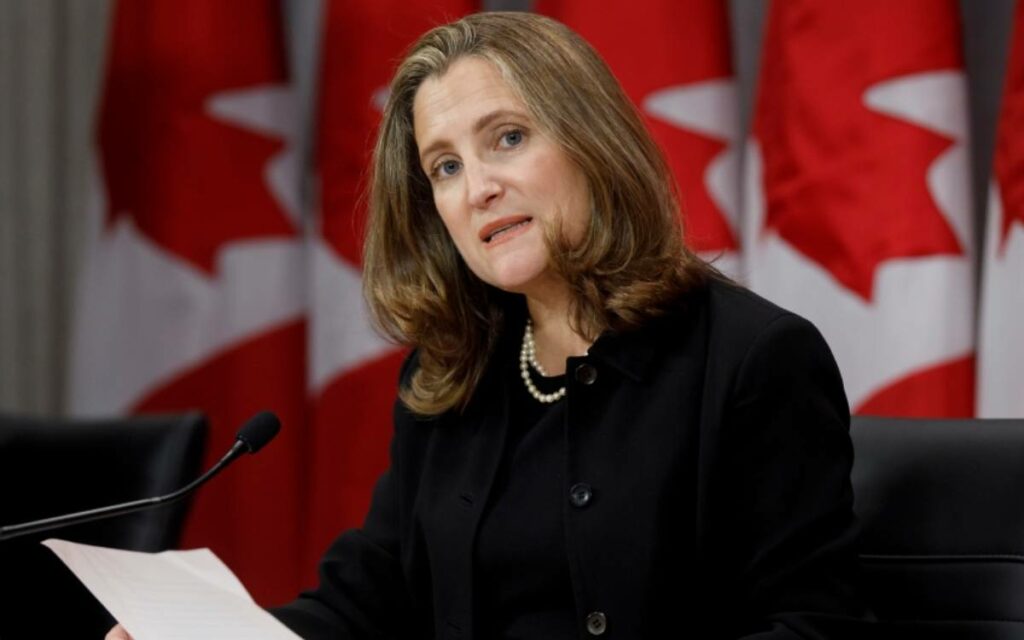 Considering the shape of Canada’s economy, you might assume Finance Minister Chrystia Freeland’s recent speech to the Toronto Global Forum would have contained some grim bits. But there was no sign of sobering statistics. She didn’t mention Canada’s deficit has ballooned more than any G-20 nation. Nor did she note Canada is struggling with the highest unemployment in the G-7.

Rather, it was a surprisingly upbeat, good news speech. Because, according to Freeland, the government has money to spend. Or rather, money to borrow. And you’d better believe it’s going to borrow and spend it. The kicker is that there won’t even be any unpleasant consequences.

To be fair to Freeland, she made it clear she’s not an acolyte of the latest fad in economics, known as Modern Monetary Theory, whose central tenet is essentially that deficits simply don’t matter. Nonsense, Freeland assures us: “there are no free lunches.”

How much the lunches will actually cost Freeland never says. But it doesn’t matter, because her government has a plan. And that plan is: to do “whatever it takes.”

That’s it. That’s the plan.

If you were hoping for more details, you’ll be sorely disappointed. And don’t even think about questioning the need for spending on, well, anything, lest you end up labelled an “Ayn Rand disciple.” Freeland’s position isn’t just that she’s going all-in on unstated spending on unstated things for an unstated period of time, but that it shouldn’t even be controversial to suggest it.

In Freeland’s retelling of recent fiscal history, her forward-looking government saved up prudently over the years in preparation for just such a crisis. In reality, this government piled up more than $100 billion in unplanned debt while the economy was growing and shattered its own election promise in the process.

But don’t be left under the impression that Freeland is flippant about debt. Heavens no. She remembers the debt crisis of the 1990s vividly! The difference, conveniently, is that the current debt is different than the old debt. The old debt ultimately required painful choices. The current debt will require none at all.

Why? Because interest rates were high then, but now they’re low. Therefore, they’ll obviously always be low and we needn’t fret about it any more.

If all that doesn’t worry you enough, consider Freeland citing journalist Kevin Carmichael’s line that “it’s unfair to saddle the next generation with our debt, but it would be worse to bequeath them a weak economy.” The unstated assumption, of course, is that the government has both the capacity and wisdom to simply “make” a strong economy to bequeath and it’s all just a matter of political will.

Set aside for a moment whether this is possible in theory. What has the Trudeau government’s track record on this front been in practice?

It can’t provide any paperwork for a staggering 20,000 infrastructure projects. Its billion-dollar “innovation superclusters” project is failing to hit every single one of its promised targets. The much-hyped Strategic Innovation Fund was supposed to create 56,000 jobs at a cost of $2.3 billion, but instead produced 11,300.

Exactly which part of this illustrious track record should inspire confidence that when it comes to reshaping an entire economy, they’re going to get it right?

Freeland asserts any and all spending is an unalloyed good, to which any objection can be safely framed as heretical. She suggests a binary choice between a debt-funded sunlit upland and a dystopian hellscape of “austerity.” And she seeks to pre-empt pressure to wind down spending after the pandemic ends by asserting that whatever it continues to spend will, by definition, be critical to “laying a foundation” for the economy of tomorrow. It is a speech that pledges literally nothing but spending today and spending tomorrow with a vague shrug that someday, maybe, we’ll stop.

The finance minister, a keen student of history, noted that it is a poor general who fights the last war. But if government debt was the enemy in the last war, Freeland is making an awfully risky bet that foe has now turned to friend. If she’s wrong, generations of Canadians will pay a heavy price.