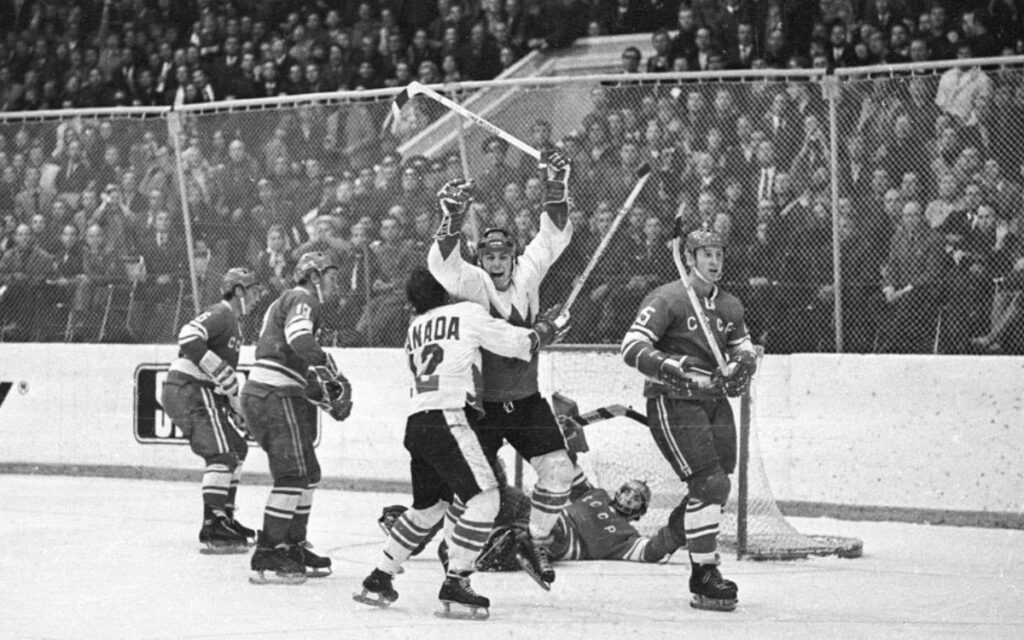 The famed eight-game hockey competition between Canada and the Soviet Union took place exactly half a century ago this month. Below chronicles the second half of the series played on Soviet soil from Sept. 22 to 28, 1972. See here for Part I. Pictured is Paul Henderson’s series-winning goal in game eight. Photo credit: Library and Archives Canada/Frank Lennon

When the Canadian team arrived in Moscow for the resumption of the series, they faced the reality of needing to win three of the four games to be played at Luzhniki Ice Palace. But another problem arose when the Soviets said the team could not stay with their families while in the Soviet capital. At this point, as Scott Morrison recalls in his new book, 1972: The Series That Changed Hockey Forever, the players met and threatened to end the series. The Soviets, not having profited from the TV rights or ticket sales, quickly backed down. This, along with 3,000 supportive fans who accompanied the club seemed to build some momentum. As mentioned in Part I linked above, unrest had surfaced, but the Canadians appeared ready to pull together as a unit with those who remained.

The team’s coaching staff decided that the club needed a consistent roster and told those players who would not be playing they were welcome to stay. Some did, some, under pressure from their NHL teams in training camp, returned home. It looked like they had deserted the team and abandoned their nation. Back home and ever since, the label of deserter became synonymous with these players, especially Vic Hadfield, one of the more experienced hands.

Dealing with the Soviets’ disciplined system of play presented Canadian coaches Harry Sinden and John Ferguson with difficult dilemmas. One problem already existed in the decision about which players to start. The strengths of some did not always work to Canada’s advantage, nor did it exploit Soviet weaknesses. In the end, Sinden, who had coached the Boston Bruins to the Stanley Cup in 1970, relied on a good dose of intuition and simply played those with the hot hand. That probably occurred no more than in goal where Sinden kept going back and forth between Ken Dryden and Tony Esposito, both of whom had trouble reading the Soviet plays or willingness to restrain from shooting, even at close range. This became a source of contention on the team, especially when the plan to play Dryden in game eight met with resistance from many who trusted Esposito more.

Tony’s brother Phil Esposito became the team’s leader after his passionate speech in Vancouver, but others were also emerging. The line of Bobby Clarke, Paul Henderson, and Ron Ellis jelled into an offensive threat the further the series stretched. As the players settled into the accommodations in Moscow, the mental games the Soviets played were taking their toll. As part of a 1989 CBC production in conjunction with his book Home Game, Dryden recalled the cramped quarters of their rooms, the narrow beds, the strange telephones which rang for no reason, and the TVs with a foreign language blaring. There were lines and wires which, as the tension screwed tighter in the series, made the players further uneasy. Phil Esposito, interviewed in the same documentary, stated he felt the team had eaten horse meat and Paul Henderson claimed his wife had been served spoiled green eggs. Under this intense pressure the series resumed on September 22.

Canada busted out to a 3-0 lead and held a 4-1 advantage well into the third period when the Russians, with a furious rally, tied the game in a span of three minutes and then scored the winner with about five minutes left to play. The stunning defeat put Canada behind 3-1 with a tied game and only three games left. To add insult to injury, Henderson had fallen awkwardly and crashed his head. Fearing he had a concussion, the team’s trainers advised him not to play in the next game. Henderson would have none of it. Meanwhile, Esposito, weathering the pressure of leadership developed a rapid heartbeat, but he too, while given the option to sit out, refused it outright. As we consider the final three games, one can only imagine how this would have turned out without either one of them. The heartening and underrated drama at the end of this disappointing loss, however, were the 3,000 Canadian fans who stood and cheered the team as they exited the ice giving the boys a sense of backing they had not felt in Canada before a home crowd.

Game six began the comeback. Canada spent over half the game in the penalty box, while the Soviets served two minors. The series turned nasty on both sides and the infamous Bobby Clarke slash of the Soviets’ best player, Valery Kharlamov, remains a matter of great controversy to this day. At one point over the course of the five decades, Henderson suggested Clarke may have gone too far. For a long time, the two did not speak until Henderson finally apologized. Canadian journalist Dick Beddoes asked Clarke about it later at a team reunion, calling it a “wicked two-hander”, to which Clarke replied “Dick, if I hadn’t learned how to lay on a two-hander once in a while, I’d never have left Flin Flon (a reference to Clarke’s Manitoba hometown).”

Gary Bergman, one of Canada’s defencemen, received such a mighty kick from one of the Soviets that it left a hole in his shin guard and a blood-soaked inner pad. The faint of heart need not bother to play or watch this increasingly hostile war on ice. Thanks to a late second period rally, the Canadians took a 3-1 lead on a Paul Henderson goal, held on for a 3-2 victory and cut the Soviets lead in the series to 3-2 with a game tied.

The closing two games of the series remain etched in my memory. Schools across Canada pulled out the TVs just as they had when the moon walks occurred. The TVs were mounted on large carts with wheels and placed in hallways. We gathered around the TV, more interested in this than any lesson or activity we would likely do all year.

Esposito had scored twice in the first period, but the Soviets answered back, and it was 2-2 after one. The Canadians went ahead only to have the Soviets tie it again. Then the Henderson heroics began. In a memorable goal which he calls the greatest he ever scored, the rising star slipped the puck through three Soviet players, deked around them, then lifted it over Tretiak to give the Canadians a 4-3 lead with just over two minutes left. The Canadians nursed this to victory, tying the series at 3-3 and a tie. My classmates and I were ecstatic, but well aware that two days later, September 28, 1972, Canada had a date with destiny.

Early fall possesses a charm all its own. Sunshine fills many of the days, but crisp temperatures begin to bite in the evening, foretelling the winter yet to come. The Canadian winter can be harsh and desolate, bitter at points, unforgiving at others. On that late September day in 1972, all these metaphors and more found expression in one game. This last game of the eight played reflected the series.

The Soviets held an early one goal lead, but the Canadians fought back to tie the game at 2 after one period. In the second period, as in the series, the Soviets took control, scored three goals and held a 5-3 advantage going into the third and last period of the series. I clearly recall the tension we all felt at General Vanier Public School in Fort Erie. How could our heroes lose? How could the good guys not prevail? Yet, it looked bleak. As the third period began, hopes were dim, it looked like a long winter ahead. Then Esposito made it 5-4 and soon after that Yvon Cournoyer, nicknamed the Roadrunner, tied the game at 5-5 and the autumn held tight, the sun breaking through.

Legendary broadcaster, Foster Hewitt, brought out of retirement to call the series, spoke the words best, “Cournoyer has it on that wing. Here’s a shot. Henderson made a wild stab for it and fell. Here’s another shot. Right in front, they score! Henderson has scored for Canada!” Pure bedlam from coast to coast, our hearts swelled, the joy exploded, and the long siege, that took us from Montreal to Moscow ended in a victory surely snatched from the jaws of defeat. The battle for ice hockey supremacy finished well, but the alarm bells rang loud!

Canada had eked out the victory this time, but the Russian bear lurked, ready to pounce and knock Canada off its perch as hockey’s champions. In the last of these columns dedicated to the 1972 Summit Series, I will be examining the legacy of the tournament and discuss a few bits of trivia like why Paul Henderson is not in the Hockey Hall of Fame, but the netminder he beat, Vladisav Tretiak, is. Who had the TV rights to this series? Most think it was the CBC. Not entirely true. There are more stories to tell, so stay tuned for one more installment regarding the 50th anniversary of this unforgettable Canadian epic.