Controversial former mayor of Pelham on ballot for provincial NDP 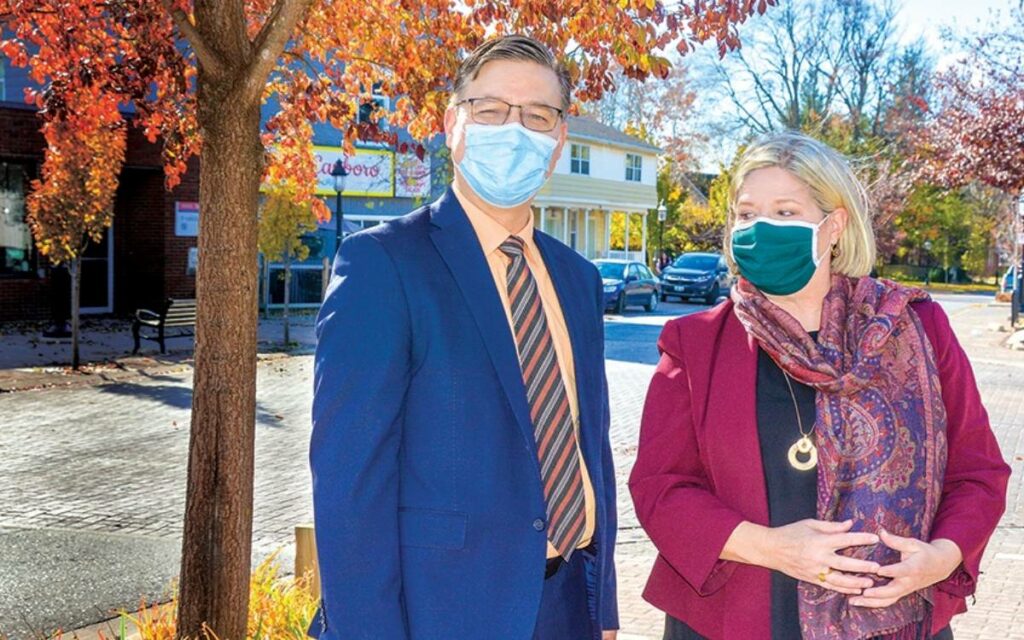 Like the mythical phoenix, former Pelham mayor David Augustyn is attempting to rise from the electoral ashes and return to public office.

At a media event held last Friday in front of the Maple Acre branch of the Pelham Library, Ontario New Democrat Party leader Andrea Horwath announced that the 51-year-old Fenwick resident will carry the NDP’s banner in Niagara West in the next provincial election, slated for June 2, 2022. Augustyn is to be acclaimed as the NDP’s Niagara West candidate at a party meeting on November 28.

Horwath said she was thrilled to add Augustyn to her team.

“Dave loves Niagara — he is a community champion who is determined to make this region the best place in the world to live, work, raise a family, and retire. I’m inspired by his passion for this beautiful place. From improving healthcare to fixing long-term care and finally addressing the high cost of housing and hydro, Dave is definitely here to make life better for Niagara families.”

Augustyn said a return to politics is something he has been contemplating for a while.

“I have been encouraged by the local NDP MPPs [Niagara Falls riding’s Wayne Gates, Niagara Centre’s Jeff Burch, and St. Catharines’ Jennie Stevens] and was looking for a way to continue to serve the community. I’m just absolutely delighted to join Andrea and her team. She’s a fighter for families across the province.”

Augustyn served as Pelham’s mayor and a regional councillor from 2006 to 2018. After initially criticizing the previous council’s purchase of acreage for what would later become East Fonthill, once in office Augustyn switched course to champion the construction of a community centre to replace the dated Pelham Arena, and to shepherd the dramatic expansion of Fonthill through new residential development.

However, controversy over the community centre’s $36 million dollar cost and questions about East Fonthill financing—including a land-for-credits scheme that one prominent developer characterized as evidence of a “corrupted process”—led to increasing public scrutiny, and to a Regional Council committee call in 2017 for an independent financial audit. Pelham’s own regional councillor at the time, Brian Baty, called on Pelham Town Council to conduct a “forensic audit” of the East Fonthill project.

A year later, the largest turnout in 30 years saw Pelham voters overwhelmingly turf every member of Augustyn’s council (one councillor did not seek re-election), as well as Augustyn himself, who came third in a four-way race for regional councillor, in the 2018 municipal election.

Asked how he plans to take on the Conservative juggernaut in Niagara West, a riding which has been PC blue at both the provincial and federal levels for several years, Augustyn, who resides two blocks from where he spoke, replied, “I think folks around these parts would say, ‘Don’t count your chickens before they hatch.’ The current government feels like they should just go back to what they were doing, which was cutting, cutting, cutting, and helping their buddies. I think people are recognizing that they need a voice in this area for positive change. They need a strong leader, which is what we have in Andrea Horwath. And that’s why I’m running. That’s why I’m here.”

At the federal level, Conservative Dean Allison has dominated in the past four elections, taking 46 percent of the popular vote in Niagara West in 2021, tallying some 25,000 votes.

“We had a good-sized crowd this morning in front of the library, and lots of well-wishers,” said Augustyn. “I think people are seeing the current government for what it is, and they’re upset with the shenanigans of [Sam Oosterhoff]. I’m going to be knocking on a lot of doors. This is about serving people in in Pelham, and Lincoln and West Lincoln and Grimsby and Wainfleet, and the entire Niagara Peninsula.”

It was no accident that his announcement took place outside the Fenwick library branch, as Augustyn used it to assert his support for community resources, and to knock the Ford government’s alleged neglect of libraries.

“The pandemic highlighted and accentuated social sufferings and disparities, but also caused a reawakening, an understanding that we’re all in this together,” said Augustyn, who pointed to the Maple Acre Library, originally built in 1919, as an example of the community coming together.

“They donated their hard-earned dollars and their labour to renew this building because they recognized the important role of libraries and building public infrastructure for the common good. I was proud, as mayor, when council and I worked together with the community to restore this old library.”

In fact, the radically different, modernist addition to the Fenwick branch drew heavy community criticism immediately upon release of its design. To the disappointment of the resident-led Maple Acre Advisory Committee, Town Council rejected their 2015 request to spend an additional $6,000 for an alternative design, which committee members viewed as a pittance in view of the project’s allocated $1 million dollar budget.

On Friday, Augustyn cited various local issues needing attention, including “affordability for folks that are having real problems, poverty across Niagara, healthcare costs, and long-term care homes to provide dignity to our seniors. I know the grape growers have special needs, and farmers in our community as well, who are concerned about the paving over of some of the rich agricultural land that we have here, plus environmental protections.”

Reprinted with permission by the Voice of Pelham.