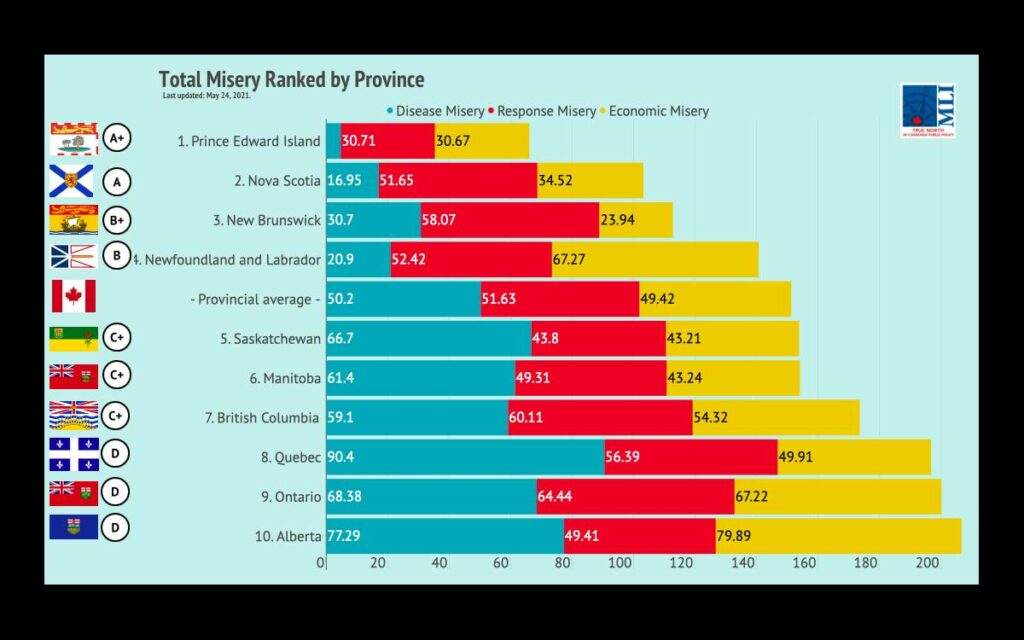 After enduring the many deprivations of the COVID-19 pandemic for well over a year, we are now seeing the post-mortems come in on how the various Canadian provinces dealt with the crisis. A recent analysis by the Macdonald-Laurier Institute (MLI) calculated a “Provincial COVID Misery Index” which evaluated the misery inflicted by the disease itself, misery caused by governments’ response to the crisis, and economic misery imposed because of the pandemic and actions taken by decision-makers.

Consistent with the findings of other studies, the Atlantic provinces fared the best, with PEI coming out on top, followed by Nova Scotia, New Brunswick, and Newfoundland and Labrador.  Saskatchewan and Manitoba were in the middle of the pack in terms of the misery index, with the four largest provinces pulling up the rear. The worst overall experience was deemed to be endured by Albertans, with only slightly better results for Ontario and Quebec.

With respect to the misery imposed by the disease itself, Quebec experienced the worst results by far, with comparably high death rates and COVID-19 case numbers. The disasters in the long-term care sectors in both Quebec and Ontario were notable for their failures. The disease wreaked the least havoc in PEI and Nova Scotia.

Regarding the misery caused by the response of governments and the health care system, the MLI found that PEI once again came out on top followed by Saskatchewan in second place.  Ontario came last because of the impacts of extended and severe lockdowns imposed by the provincial government, to the extent that Toronto has been the most locked down jurisdiction in North America. Lockdowns and stay-at-home orders were most prevalent in the larger provinces, producing the additional negative impacts from students unable to attend in-person learning, businesses on the brink of collapse, and many employees and families with strained finances.

In the area of economic misery, the MLI report found that although all provinces experienced significant negative impacts, New Brunswick did the best in limiting damage to its economy. Alberta was in last place and, considering that federal government policies have hobbled Alberta’s key energy sector for a number of years, the further damage done by the pandemic just added insult to injury. Not surprisingly, the larger provinces suffered greater economic harm as a result of their extended periods of lockdown.

Canada’s less-than-stellar response to the pandemic was also very much a result of the federal Liberal government dropping the ball in a number of important respects, as the MLI study observed. The fact that the Trudeau government did not implement stringent border control measures and limitations on foreign travel at the beginning of the pandemic, and still have not to this day, meant that more misery was inflicted on Canadians in every province. The favourable rankings of the Atlantic provinces showed the importance of keeping the virus out in the first place, which was much more difficult for the larger provinces with international airports that were not under provincial control and were kept open by the federal government.

The MLI analysis also highlighted the importance of geography, likening the relatively negative experiences of the larger Canadian provinces to that of larger and more populous countries which also struggled with their pandemic response. As with smaller countries that could be more easily isolated, the smaller Canadian provinces with less connectivity to international travel and interprovincial activity found it easier to keep the virus out because of their geographic reality.

In most respects, the MLI analysis serves to confirm much of which is already known about how the different provinces experienced the COVID-19 pandemic. It does underscore, however, the serious negative impacts of the federal government’s failure to secure Canada’s borders early on and to procure vaccine in a timely manner. The study also identified the importance of such factors as geography, and that luck often had as much of an effect as good planning. Two conclusions from this research and other similar work are clear – Canada should have done better, and there is lots of blame to go around.