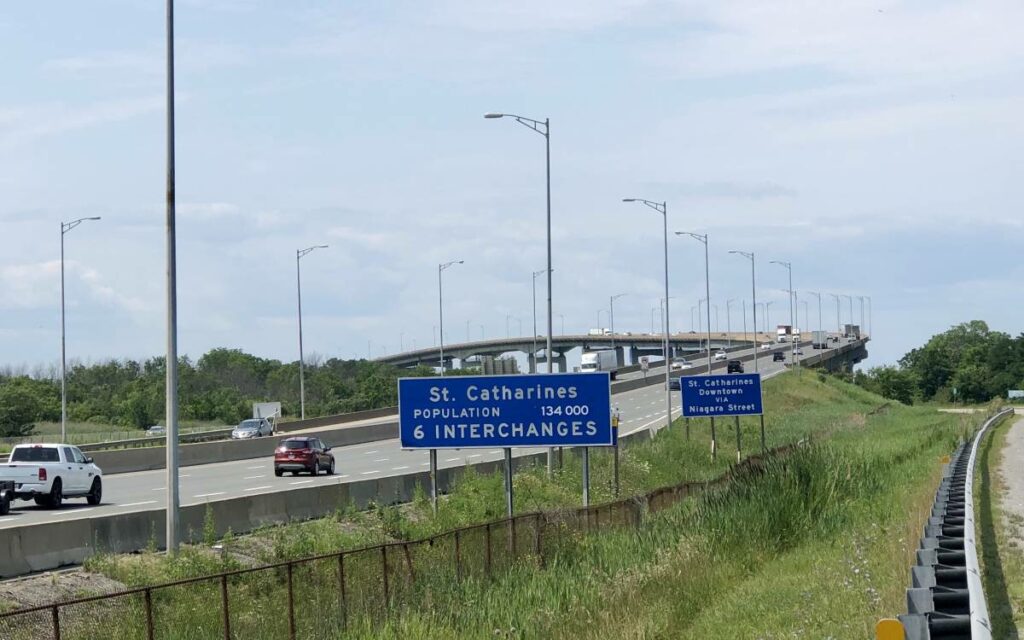 Garden City Skyway. The bridge connects Niagara-on-the-Lake to St. Catharines. Built in 1963, it will soon be one of two bridges to carry QEW traffic across the Welland Canal. Photo credit: The Niagara Independent

With work well-underway along the QEW in Niagara-on-the-Lake transforming the Glendale Avenue exit/intersection into Canada’s only third ever diverging diamond interchange, another major nearby infrastructure project is getting close to becoming a reality.

About a kilometre up the QEW toward Toronto from the Glendale interchange, the Garden City Skyway will soon be one of two bridges traversing the Welland Canal, as plans to twin the aging megastructure have finally been given a commencement date.

Speaking with The Niagara Independent this week, Ontario’s Ministry of Transportation said construction is slated to commence 2024. The start date coincides with the completion of the Glendale interchange reconstruction, which is currently scheduled to wrap-up July 2023.

“In the case of the Garden City Skyway, the planning phase and preliminary design phase are complete,” said Natasha Tremblay, spokesperson for Minister of Transportation Caroline Mulroney.

As Tremblay explained, the third and final design phase – detail design – will commence once the delivery model is confirmed, the necessary approvals are obtained, and all intermediary work is complete.

“In some cases, such as with the Garden City Skyway, there is design work that takes place between the main preliminary design and detail design phases,” said Tremblay. “The utility relocation planning, archaeology investigations, bridge aesthetics work, geotechnical, environmental and foundation borehole investigations that are taking place this year are important elements of the overall project and will provide critical input required during the detail design phase of the project.”

When asked if there were any updates regarding the often-arduous utility relocations, Tremblay said that while no physical relocations have taken place yet, planning is in progress.

Regarding several public and private properties that must be acquired on both sides of the Welland Canal, Tremblay said that “all affected owners have been contacted.”

Along with construction of a brand-new twin structure to the north of the current Garden City Skyway, part of the project will see the existing bridge receive further refurbishments beyond what has already taken place.

Some steel repairs in key areas were completed in 2020. Recent inspections of the top flange of the structural steel revealed no significant corrosion, while the concrete was in good condition. Maintenance work on a few localized areas of the asphalt was conducted earlier this year.

Overall, according to Tremblay, “the bridge is currently in relatively good shape.”

Built in 1963, there’s been talk of twinning the Garden City Skyway for over a decade now, as traffic congestion and safety concerns regarding the near 60-year-old bridge have increased throughout the years. But successive Liberal governments kept pushing the project back.

In a statement to The Niagara Independent, Niagara West MPP Sam Oosterhoff talked about his government’s commitment to going through with key infrastructure projects that have been long promised, but never delivered to Niagara residents.

“From roads to bridges to community centres and hospitals, meaningful projects that help the lives of families and workers in Niagara are happening on a scale that has not been seen in decades in Niagara, as a direct result of Premier Ford and the Ontario PC team making a concerted effort to invest in infrastructure that had been crumbling for too long under the Wynne-Del Duca Liberals,” said Oosterhoff.

“This kind of key infrastructure project demonstrates the Ford government’s commitment to delivering vital measures that help the people of Ontario. From improving traffic flow and the passage of goods and people through Niagara, as well as generating immense economic spin-offs and jobs for the local economy and workers, this massive new Skyway project is the kind of hard infrastructure that has been talked about for decades, but is finally being delivered under a PC government.”

While the ministry could not release internal estimates for the project, Ontario’s ‘Southern Highways Program’ website claims construction of the new bridge and rehabilitation of the Garden City Skyway will cost “over $80M.” Cost comparison to similar projects would suggest the final figure will be significantly higher.

A completion date for the project has yet to be determined.

The Garden City Skyway originally opened to traffic in October 1963, two months shy of four years after construction of the bridge began in January 1960.