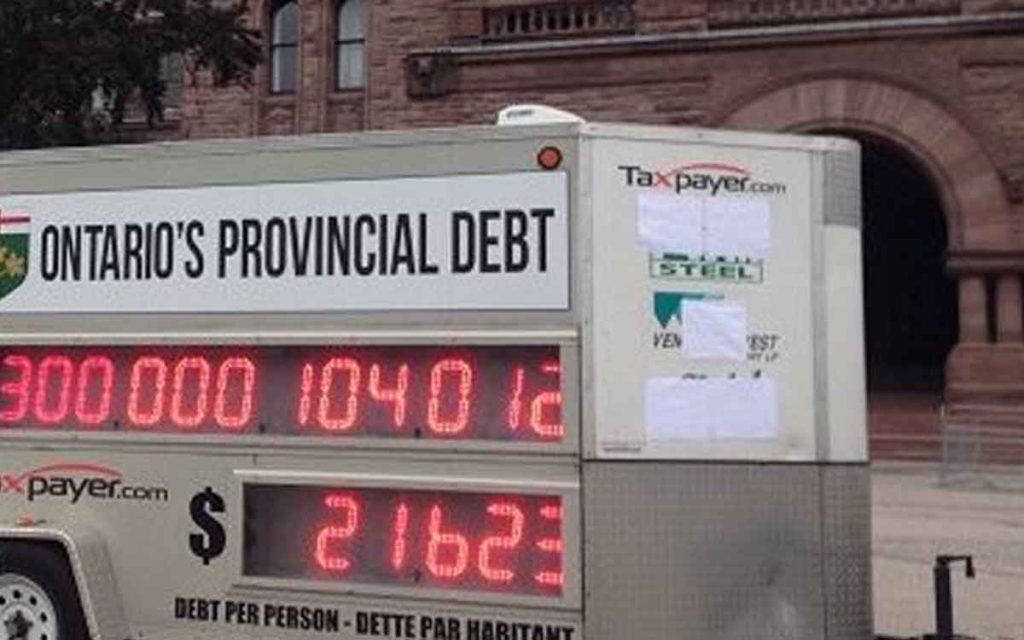 Ontario’s debt clock in front of Queen’s Park when it rolled over $300 billion.

Over the last few years we have witnessed significant growth in government deficits in many provinces and federally even as the economy has been growing.  Accordingly, there has been speculation in the media and elsewhere over whether deficits really matter.  Perhaps we should refer that question to Paul Martin and Jean Chretien who, not so very long ago in the mid-1990s, were faced with the stark reality that a sharp increase in public debt meant that Canada would not be able to borrow any more in international financial markets except at exorbitant interest rates that would hobble our economy.  They were forced to slash government spending, sharply reduce transfers to the provinces for health and education, drain the $57 billion surplus built up in the Employment Insurance fund over many years and use a $28 billion surplus in a public sector pension plan, among other things, to pay off the deficit.  Through all of these efforts they did manage to get Canada’s finances back on track but disaster was close. Within the last 20 years we have also seen various jurisdictions effectively go bankrupt, including Detroit and Greece among others. In all cases the cause was government spending growth that far outstripped the private sector’s ability to pay for it.

What short memories we have.  In Ontario, the recently deposed Liberals spent their 15 years in government running consistently sizeable deficits and more than doubling provincial debt in the process.  From a political standpoint, it is always easier in the short term to buy votes and support by spending other people’s money than to be prudent stewards of the public purse. Canada’s federal government under Justin Trudeau is demonstrating that fiscal cop-out today.  Some recent data revealed that Trudeau the Second now holds the all-time Canadian record for the highest increase in debt per person of 5.6 per cent over the last four years by a government that did not face a recession or world war.  Other Liberal Prime Ministers who also did not face recession or war, such as Pearson, Chretien and Martin, actually reduced the per-capita debt of Canadians during their tenure.

This is not to say that there is not a role for deficits in particular circumstances such as recession.  Those who are big proponents of never-ending government spending like to cite the work of economist John Maynard Keynes who did have a more tolerant view of deficits than did many others in his profession.  But even Keynes favoured paying down debt when the economy is growing to reach budget balance, and running deficits only in recession to boost social spending and lessen the shock of increased unemployment and reduced income.

And that really is the nub of the issue – using borrowed funds sensibly in difficult times but paying them back as soon as economic growth permits to achieve balance over the course of the business cycle.  Recent experiences such as the Liberal big spenders in Ontario and now in Ottawa are leaving the province and country with no reserves with which to face a downturn or other shock such as interest rate increases.  A common feature of big spending governments is to use the debt-to-GDP ratio instead of other indicators as it tends to present a more forgiving picture.  Back in the mid-1990s when Canada was close to hitting the debt “wall”, the debt-to-GDP ratio was about 70 per cent which is considered the danger zone when financial markets will increase the cost of financing public debt to cover risk, driving up interest rates for all borrowers including private corporations and consumers, weakening the economy and triggering a spiral into decline.  The current debt-to-GDP ratio for the federal government is just over 30 per cent, considered a reasonable level.  But add in provincial debt and Canada’s combined debt-to-GDP is  about 68 per cent – approaching dangerous territory. And as Canada saw in the mid-1990s, when things start to go south they tend to do so very quickly and a government has scant time to respond.  The necessary responses required tend to be very dramatic and painful.  Many indicators for the Canadian economy are suggesting a recession is not far away, and with governments and consumers carrying heavy debt loads, an economic downturn accompanied by interest rate hikes will have a rapid and very negative impact.

Another clear detriment to carrying large government debt is that valuable resources are spent merely to service that debt instead of being devoted to enhance public services.  Ontario currently spends over $1 billion every month just paying interest on the debt, funds that could surely go to much better uses.

The sad but true political reality is that there will always be many fans of increased government spending and few supporters of so-called “austerity”, which really equates to spending within your means.  The Ford government is experiencing this in spades even as it tries to undertake a very modest slowdown in spending.  All of the misinformation disseminated by opposition parties, public sector unions and other enemies of the Conservative government certainly doesn’t help.  For example, these groups are currently bleating about the “cuts” to such services as health care, education and autism among others, when even the most cursory read of the budget shows that spending continues to increase in all of these areas.  In some cases the increases are even greater than those planned by the former Liberal government.  It is a challenge to get past this dishonest and unhelpful noise from the many groups who believe their ox is being gored by a more sensible approach to government spending in Ontario and realize it is the right thing to do for every Ontarian.  Canada needs to do the same at the federal level and in other provinces as well.

It is also important to note that the last time Canada faced a fiscal crisis overall conditions were very different than they are today.  Back in the 1990s, the global economy was experiencing a boom that greatly benefitted Canada, overall debt levels were lower and the baby boomers were in their prime earning years paying lots of taxes to governments to help bail them out of their debt woes.  The reverse of all of these factors is in play today, with aging populations demanding more government services and record debt levels prevailing among governments and consumers.  A number of actions of the federal Liberal government in the energy sector and elsewhere have made Canada an undesirable destination for foreign investment, and that will take its toll on national growth for years to come. The next recession is going to be a doozy, and any government that is not preparing for it today by getting their fiscal house in better shape is betraying every citizen.  Any government that is trying hard to dig our way out of the deficit and debt hole deserves our thanks, not the overwrought melodrama and dishonesty we are currently seeing on a daily basis in Ontario from those that only ever have complaints, never solutions. 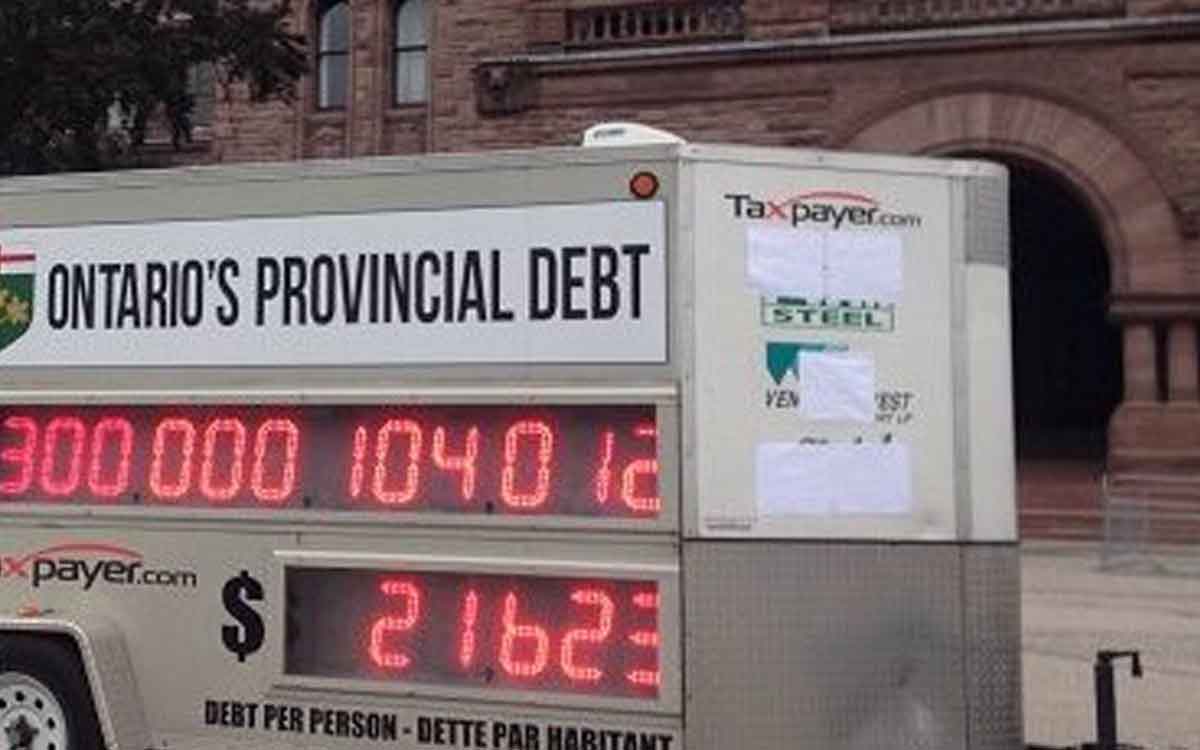