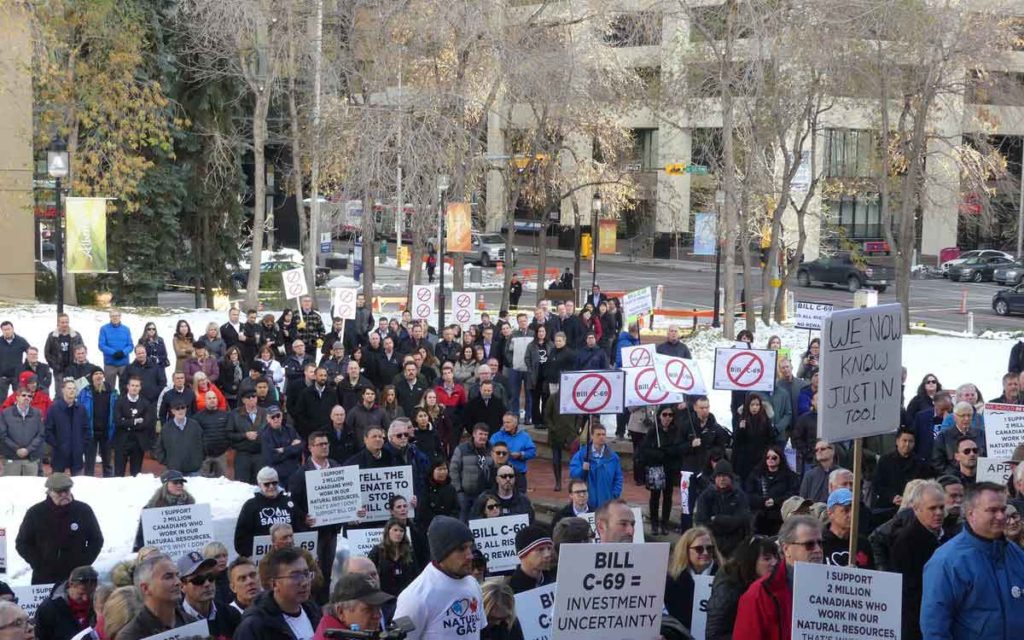 Parliament Hill is seized with pipeline politics. Our country’s oil and gas sector is pitted against Ottawa’s bureaucracy. Western Canadians are feeling betrayed and victimized by Prime Minister Trudeau. It’s déjà vu all over again!

This drama is unfolding in the Senate of Canada where a piece of legislation is being hotly debated on the floor of the Upper House. Bill C-69, the Impact Assessment Act, will establish new federal government environmental assessment processes for the development of all major resources projects in Canada. Minister of Environment and Climate Change Catherine McKenna claims it will restore public trust and provide greater transparency in government approval processes, for it ensures greater public input, greater participation by Indigenous peoples, and it is intended to ensure decisions will be informed by scientific evidence.

However, critics point to the fact Bill C-69 creates more federal bureaucracy and a new regulatory agency. The legislation also dictates new timelines and specific steps for full public hearing processes that will be all-inclusive, including international groups and interests beyond Canada’s borders. It will put “gender considerations” on an equal footing with economic factors at hearings on pipelines and other megaprojects.

Most concerning for the oil and gas sector, and its investors, is the fact Bill C-69 enshrines in law that all new pipelines and major projects will be subjected to a National Energy Board review of upstream and downstream greenhouse gas emissions tied to the project.

The legislation was introduced in early February and sailed through the House of Commons with support from the Liberal majority. However, now, in the Senate, it has come under close scrutiny – particularly by senators representing Western Canada. In echoing the strong resistance from leaders in Canada’s energy, mining, forestry and port expansion industries, Alberta’s Independent Senator Doug Black recently told the Financial Post, “This bill is so seriously flawed – you’d have to have hundreds of amendments.”

“Under this proposed legislation, we’re not going to need to worry about the time for projects and the opposition of projects because we’re hearing from companies that would be natural proponents to develop the Canadian resource industry, simply saying: ‘We’re not even going to apply.’…Canada has a sign in the window which says, ‘Closed for business’.”

Opposition to Bill C-69 is mounting, fueled by the growing frustrations within the oil and gas sector, and from Western Canadians who feel Ottawa is deaf to their calls for changes to the bill.Hal Kvisle, former CEO of TransCanada Corporation said: “Bill C-69 is an absolutely devastating piece of legislation.” While Rick Peterson, spokesperson for a national not-for-profit group of resource sector investment professionals said: “The reality is this bill…radically and negatively reworks the environmental assessment requirements for new resource projects. It is terrible legislation that needs to be re-done…C-69 must die in the Senate.”

Rich Kruger, Imperial Oil Ltd. CEO added: “A cloud of uncertainty hovers over whether or not global investors would choose to sink their money into Canadian energy.” While Jim Davidson, the recently-retired chairman of energy-focused investment bank GMP FirstEnergy, called the capital flight from Canada’s oil patch “the worst he’s ever seen.”

In a Calgary Postmedia editorial this week, Licia Corbella has best captured the exasperation of Westerners and those working and investing in Alberta’s oil fields when she observed: “Like father, like son? When it comes to instituting policies considered disastrous to Alberta’s energy industry, Liberal Prime Minister Justin Trudeau is not unlike his father – former Prime Minister Pierre Trudeau, who announced the devastating National Energy Program on Oct. 28, 1980, almost 38 years ago to the day…”