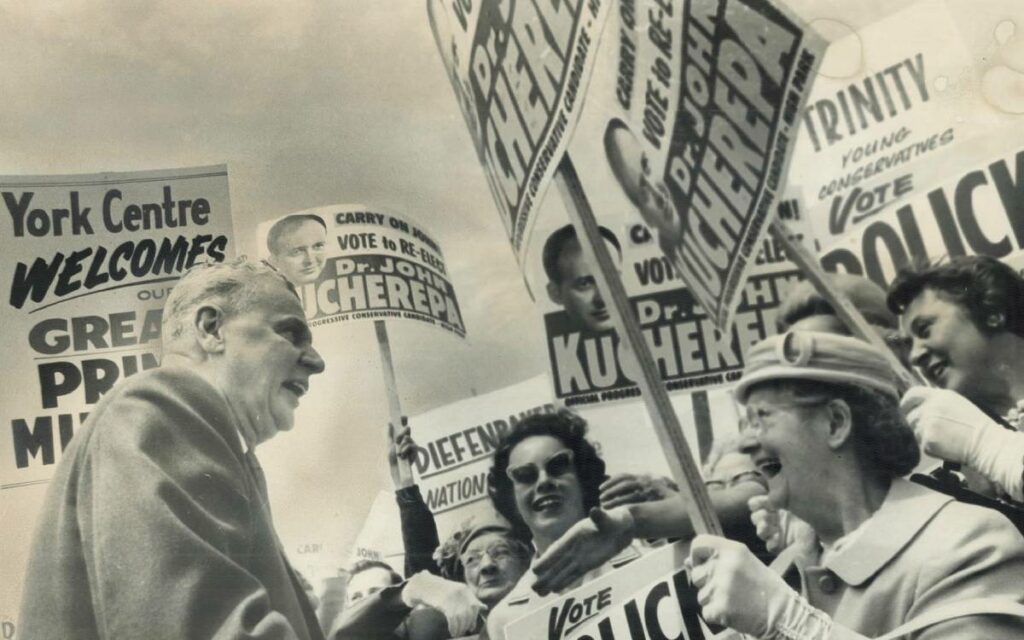 Wednesday marks exactly 63 years since the Progressive Conservative Party under John Diefenbaker pulled off the largest federal electoral victory in terms of percentage of seats won in Canadian history.

Contested just nine months after Diefenbaker squeezed by a stunned Louis St. Laurent to win the Tories their first federal contest in 27 years, the March 31, 1958 snap election saw the big tent PC Party pick up 208 of the 265 available seats.

Myriad factors led to the massive landslide: an early, uncharacteristic miscalculation by newly-elected Liberal leader Lester B. Pearson, the annihilation of Solon Low’s Social Credit Party in Alberta and British Columbia, and Quebec’s flip from Red to Blue. Not to mention, Diefenbaker and his team ran a brilliant campaign, especially in comparison to the disorganized Grits.

Truly a progressive conservative, Diefenbaker was responsible for a number of forward-thinking ‘firsts’ in Canadian politics.

Under Diefenbaker’s initial mandate, MP for Hamilton West Ellen Fairclough became the first woman to accede to a federal cabinet position when she took up the role of Secretary of State in 1957.

With the ‘Chief’ as one of her biggest advocates in the years following, Fairclough served as Minister of Citizenship and Immigration and Postmaster General, even fulfilling a two-day stint in February 1958 as Acting Prime Minister of Canada.

During her time in office, the former accountant and Deputy Mayor of Hamilton pushed for equal pay for equal work, partially reformed the country’s discriminatory immigration policies, and helped ensure all Indigenous people in Canada received the right to vote (which came to pass under the prime minister’s direction in 1960).

It was also under Diefenbaker that James Gladstone was named Canada’s first Indigenous senator. Alongside Fairclough, Gladstone was instrumental in making sure that all of Canada’s Indigenous peoples received the right to vote.

The Prince Albert, Saskatchewan MP’s long-planned Canadian Bill of Rights came into effect August 10, 1960. Amongst other protections, Diefenbaker’s legislation formally recognized all individuals’ right to life, liberty, security, enjoyment of property, and equality before the law. It guaranteed one’s freedom of religion, freedom of speech, freedom of assembly, and the freedom of the press. It also enshrined the notion of innocent until proven guilty and made arbitrary detention and imprisonment illegal.

Though limited to federal law and government actions (lacking provincial consent), Canada’s Bill of Rights was groundbreaking at the time of its enactment and helped pave the way for the 1982 Canadian Charter of Rights and Freedoms. Now largely superseded by this later legislation, Diefenbaker’s original Bills of Rights remains in effect to this day.

Felt most acutely at home, the influence of Dief the Chief’s progressivism also stretched beyond Canada’s borders. For example, when South Africa applied to remain in the Commonwealth in 1961 following a successful referendum to become a republic, Diefenbaker was the only leader from the original British Commonwealth states to vote no. The prime ministers of the UK, Australia, and New Zealand all voted to allow the racially-segregated nation to remain in the Commonwealth.

The Canadian prime minister said that unless the white-controlled South African government denounced Apartheid in principle, it could not hold membership in Her Majesty’s intergovernmental organization. Refusing to agree to Diefenbaker’s terms, South Africa withdrew its application.

The country only regained entry into the Commonwealth following the end of Apartheid in 1994.

As the eminent journalist and historical author Peter Newman claims in his book on Canada’s 13th prime minister, the influence Diefenbaker exerted on the 1961 Commonwealth Prime Ministers’ Conference remains his “most important contribution to international politics.”