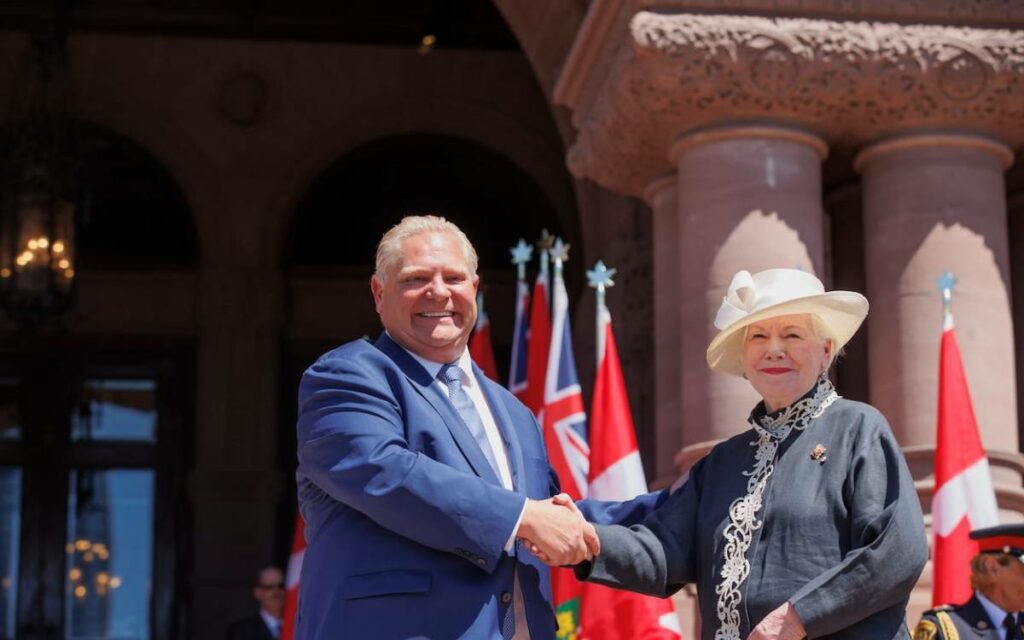 After winning another majority mandate last month, Premier Ford expanded his Cabinet to 30 members and significantly increased the number of parliamentary assistants that will work alongside his executive council. Pictured: Ford shakes hands with Lt. Gov. Elizabeth Dowdeswell outside Queen’s Park in Toronto before naming his new Cabinet, June 24, 2022. Photo credit: CBC/Evan Mitsui

It is an unfortunate reality that government Cabinet size expands over time such that the longer a government is in power, the larger the Cabinet usually becomes. This holds true for parties of every political persuasion, whether “big government” Liberal and NDP types or supposedly “smaller government” Conservatives. You would think that the opposite would hold true, in that as a government and its ministers get more experience in governing, there should be fewer people in Cabinet as they would become more efficient. But you would be wrong, as demonstrated yet again by the recent naming of Cabinet by Ontario’s re-elected Progressive Conservatives.

Ontario’s Cabinet has now expanded to 30 members, up from its pre-election size of 28. As all Cabinet ministers retained their seats in the June 2 election, Ford was put in the position of expanding Cabinet or demoting some former ministers, and he did some of each. As for who ended up where in Cabinet, many of the key portfolios remained unchanged. For example, Peter Bethlenfalvy’s solid performance in Finance to date meant that he retained that vital post.  Stephen Lecce will stay on as Minister of Education at an important time as teachers’ union negotiations are coming up this fall.

Lecce has not been popular with the teachers’ unions, but then those unions’ permanent state of disgruntlement means that anyone who serves as minister in that portfolio, whatever their political affiliation, has a rough ride. Even Kathleen Wynne, education minister in the McGuinty government, eventually attracted the unions’ ire despite giving them almost everything they wanted for years in defiance of the interests of most Ontarians. Indeed, any education minister that the unions take a shine to should be viewed as suspect by the majority of taxpayers who ultimately foot the bill for union demands.

Other ministers who remained in their previous jobs were Caroline Mulroney in Transportation, Steve Clark in Municipal Affairs and Housing, Monte McNaughton in Labour, Vic Fedeli in Economic Development and Doug Downey as Attorney General. The gap in the important Health portfolio left by the retirement of Christine Elliot will be filled by Sylvia Jones, who will also be Deputy Premier. Ford’s appointment of his nephew, Michael Ford, as Minister of Citizenship and Multiculturalism, created a minor kerfuffle and accusations of nepotism, but as long as the younger Ford performs well in the position these complaints will abate in time.

Another excess on Ford’s part was in naming parliamentary assistants (PAs), who act as aides to ministers. The new Cabinet will have 43 PAs, well above the previous 28 and a significant jump from the 29 that were in Kathleen Wynne’s administration. Ministers and PAs all receive sizeable pay bumps over the compensation of plain-vanilla MPPs, and have additional staffing needs that must also be accounted for. It’s safe to assume we won’t be hearing too much about the government “gravy train” from anyone in this Conservative government anytime soon.

This Ontario Cabinet is also large by historical standards. Most Cabinets in the province have ranged between 22 and 25 members, with former premiers Bob Rae and Dalton McGuinty hitting 28 members at their peak. Although premiers usually use the election of more MPPs as an excuse to expand Cabinet size, a larger Cabinet with more assistants also means higher expenses for Ontario taxpayers.

Considering that governments everywhere expanded their size and spending because of the pandemic, this should be an opportune time to begin to reverse that trend and reduce the size and cost of government in Ontario and elsewhere in Canada. Early signals from the Ford government’s second term do not augur well in this regard.