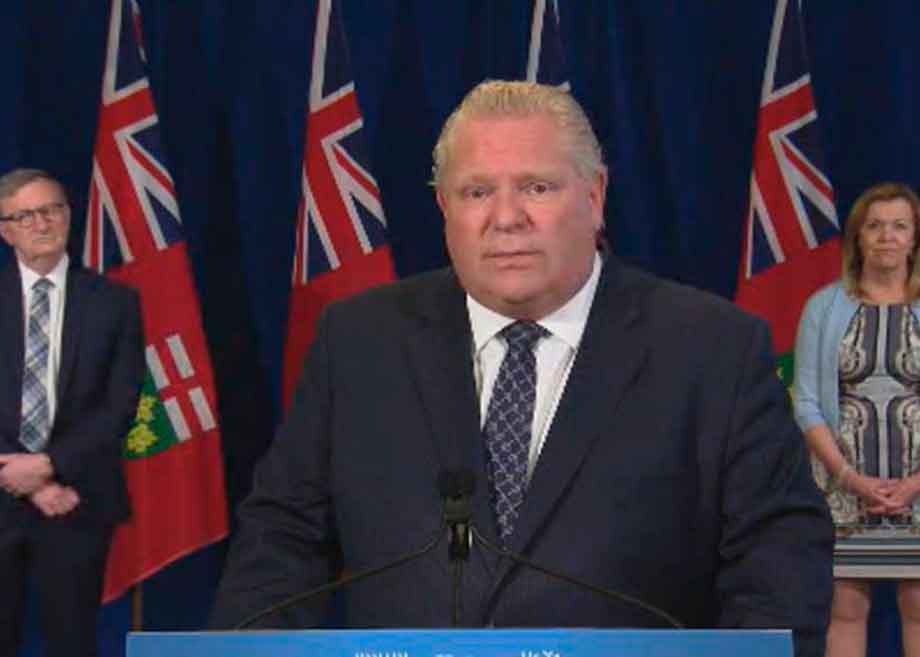 Premier Doug Ford announces Ontario will extend the State of Emergency until the end of June.

Premier Doug Ford’s decision this week to extend the emergency orders until the end of June attracted a great deal of criticism from many quarters.  This decision meant that gatherings of more than five people would continue to be prohibited and many businesses such as restaurants and bars had to remain closed except for limited operations like take-out service for restaurants.  Most criticisms were based on the fact that since the vast majority of deaths from COVID-19 had taken place in facilities such as long term care homes among highly vulnerable populations, there was little if any reason to continue to restrict the activities of others not in these situations.  Other critics noted that as the biggest Covid-19 problems were concentrated in the Toronto area, other parts of the provinces should be permitted to open more extensively as they did not face the same circumstances.

This is an immensely tough call for any government, especially in provinces such as Ontario that are not yet out of the woods in terms of controlling the spread of the virus.  The trade-off between being seen to permit unnecessary infections and deaths from the virus and permitting more economic carnage by extending closures of various parts of the economy is a no win situation that every government finds itself facing to varying degrees. After a few months of dealing with this pandemic, a number of governments have recently made apologies for how they have handled things and more mea culpas will undoubtedly follow in the coming months.  For instance, the head epidemiologist at Sweden’s Public Health Agency just stated that Sweden “could have done better” in handling COVID-19. Unlike most other countries, Sweden opted to follow a no-lockdown strategy and depended on largely voluntary measures, and experienced a much higher level of confirmed cases and deaths than neighbouring countries as a result.

Our own federal chief public health officer, Dr. Teresa Tam, recently apologized for the government’s earlier errors of permitting Canada’s borders to remain open far too long and advising against the wearing of masks, effectively conceding that many unnecessary infections and deaths occurred as a result.  Bizarrely, however, in the wake of all of the protests erupting in the US and Canada over racial issues, Dr. Tam just this week advised Canadians that it was okay to join protests as long as they refrained from yelling;  Because protesters have a track record of respecting social distancing protocols and not yelling, undoubtedly. This is exceedingly odd advice coming from a senior health professional. The Ontario government also was put in the position of making an apology in recent days for a mix-up between two hospitals which led to several hundred confirmed cases of the virus not being flagged to health authorities which meant the usual follow-up and tracing wasn’t done.  This highly charged environment for governments at present has made them understandably gun-shy and more prone to err on the side of safety, leading to decisions such as Ford’s to extend emergency provisions.

As for taking a regional approach to re-opening the economy, Ford initially rejected that concept but more recently has said he is considering it within the context of a generally cautious plan.  There are  certainly no easy solutions to this dilemma as, although it is expected that a high density city would have more serious problems with the virus, there are rural hot spots as well.  Looking at what other provinces have done can also be helpful.  British Columbia, for example, has had considerable success containing the virus in areas with population density and international exposure, and their top doctor Bonnie Henry has consistently argued against permitting different parts of the province to reopen at different times, arguing that what they have been doing to date has been working well and doesn’t need to be changed.

Whatever any political leader does in our current crisis they are going to be damned by some if they do, damned by others if they don’t open up the economy soon to permit people’s lives to get at least somewhat back to normal and mitigate the economic and social cost of the shutdown.  Ontario’s COVID-19 numbers have improved but remain unstable, suggesting that a cautious approach is still in order.  It is still very much a guessing game, however and certainty about which approach actually did work best will only likely come far into the future, when our hindsight will be 20-20.