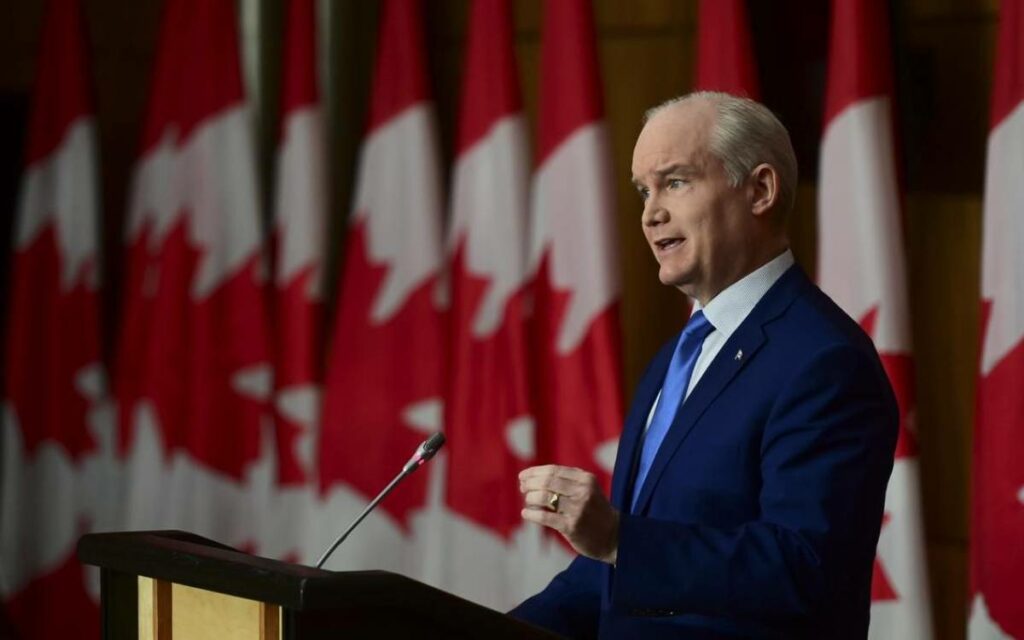 Erin O’Toole is showing his true-blue colours again, and all it took was a group of so-called activists fighting to cancel the nation’s most important day – Canada Day.

In light of the recent devastating news about the unmarked graves of Indigenous children found at a former residential school, a handful of municipalities have elected to cancel their Canada Day festivities. A number of mayors across the country have decided that Canada’s treatment of Indigenous people is not worth celebrating.

However, Conservative Party Leader Erin O’Toole is taking a firm stance against the efforts to cancel Canada Day. He’s vocalized his commitment to repair the relationship with Indigenous peoples but believes that it can be achieved without tearing the country apart.

“I’ve spoken about the tremendous role of Aboriginal veterans in our history who weren’t recognized at the time. We need to recognize the fact that they stepped up. There is so much to celebrate in our country that we have to be proud to be Canadian,” O’Toole said in his recent speech.

Nonetheless, many city councillors and mayors are choosing to ignore O’Toole’s cries for unity. Victoria city council was one of the first to cancel their Canada Day festivities. Following suit, other communities joined including the Fredericton, N.B., Burnaby, B.C., and many Saskatchewan cities. The pleas to cancel Canada Day have received mixed reviews. While many want to support the Indigenous peoples and acknowledge their struggle, many Canadians find it difficult to cancel Canada Day completely, forcing them to ignore all of the accomplishments we have achieved as a country.

There is no doubt where Erin O’Toole stood with his stance on cancel culture during this most recent leadership bid. Many pointed at the stark contrast of O’Toole’s political positioning compared to his original leadership bid in 2017. This time around he ran as a more right-leaning conservative, claiming to be the defender of true conservative values and to stand up to “the radical left”. After Erin O’Toole won the leadership for the party many were surprised to see how centrist the new leader was willing to go on various issues, such as being pro-choice, pro carbon tax, and overall, more progressive.

Now with this anti-nationalist sentiment seemingly transitioning from the U.S. to Canada, Erin O’Toole seems like he has had enough. As an individual who served in the Canadian Armed Forces, O’Toole has always made his love and dedication for his country clear. Canceling a day where we celebrate how far our country has gone and the sacrifices many have made to get to where we are today, seemed out of the question for O’Toole. Is the canceling of Canada Day the catalyst for Erin O’Toole to live up this true-blue leadership he ran on? Many think so after watching his latest passionate speech on the topic.

One remark definitely left an impression on people: “Is it the fact that I’m the only one running to be prime minister that’s actually proud of our country and wants it to do better?”

Another of the more notable quotes from the CPC camp which has spread quite far online is, “it is time to build Canada up, not tear it down”. The quote has resonated with many, as it is one of the most liked posts this month from the CPC Facebook. Why? Because the vast majority of Canadians do not want to cancel Canada Day, they are proud of the country they live in. They look to countries like the United States and see what a hate-of-country sentiment does to society – it erodes it. Anti-nationalism causes nothing but deeper divide and animosity amongst the population of a country.

Erin O’Toole made it clear in his address that we are not perfect, but no country is. If we look hard enough through the history of any country we will find dark times. What matters is the present and how that country has grown and evolved from its mistakes. Canada is a beacon of democracy and freedom in the world. We are amongst the world leaders in rights, freedoms, and health care – Canadians have so much to be proud of and Erin O’Toole, as a leader should, is reminding many of just that.

After over a year of a grueling pandemic which has taken a toll on all Canadians, this Canada Day should serve as a uniting force, not a divisive one. Criticism and the want for your country to do better is only natural in society, but to shame others for having pride in the red and white is not.