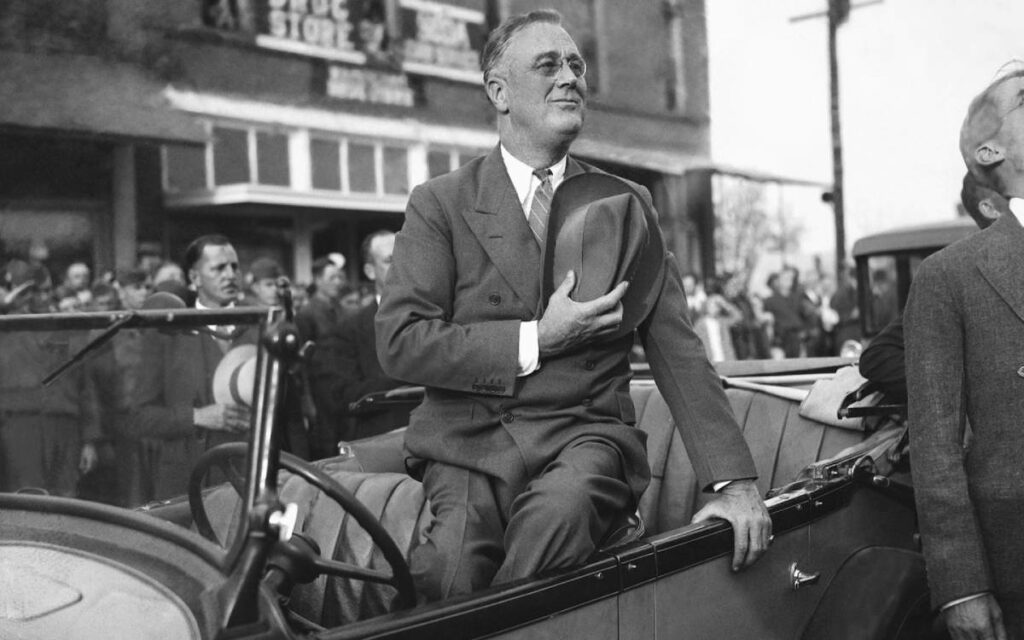 Are term limits necessary, fair, and/or effective? As discussed below, there are myriad pros and cons to limiting an individual’s time in office. Pictured is President Franklin D. Roosevelt, the only American president to be elected four times. After Roosevelt’s death, Congress passed the 22nd Amendment, limiting presidential tenure to a maximum of two four-year terms. Photo credit: AP

A long litany of complaints exists about career politicians. Cynics suggest that long-serving members of any legislative body merely maintain their positions to seek civil servant platinum pensions, advance the personal interests of themselves as well as their families and have become insulated from the public’s interest. How much truth lies beneath these charges varies on the character of the politician in question. Simply put, like guilt or innocence in a criminal case, each member should be judged on the merit of their record.

For this reason, our article this week is posed as a debate based on three qualifiers. While neither of us currently hold a firm opinion on the issue, Dave will argue in favour of term limits and Nick will represent the viewpoint against.

The accumulation of power in the officer of one branch of government is a threat to democracy. Winning office remains necessary, but the election becomes a case of name recognition, the status quo, and power influencing. Regardless of the position, democracy requires a regular change in person to maintain a sense of legitimate voter choice. This is true across all levels of government. Holding an office was never meant to be permanent. A time period such as what is placed on judicial officers would benefit our democracy. It would encourage newcomers to throw their hats in the ring, thereby facilitating a society of citizen (not career) politicians.

Finally, the connections made by officials can present mounting ethical challenges. A sense of entitlement can override the imperative to serve. Arrogance can trump humility when a politician begins to believe he/she knows what is best for his/her constituents. The longer a politician serves in one office the more voters, interest groups, and lobbying officials associate that person with the office and work for that candidate to retain office. It all works for mutual benefit but leaves the voter unprotected from greed, bad deals, and bloated budgets. Term limits would sideline these problems, renew the offices, purge the corruption, and increase voter interest/participation.

TERM LIMITS ARE NOT NEEDED.

Term limits are already available. In a democratic society, elections are held on a regular basis. Elected representatives are required to defend their record to constituents at least every few years. If residents of a respective jurisdiction are unhappy, they can vote for another candidate.

Forced term-limits stifle the will of the people, and therefore, democracy itself. They remove the right of citizens to maintain a representative that is effectively advocating their interests. This could result in poorer quality government. How can this highly tedious proposal be considered as a strong solution for advancing democracy?

If a candidate establishes a brand, holding an office for several terms, it becomes almost impossible to unseat her/him. This level of familiarity may comfort those wishing to establish ties, have an “in”, or donate generously to a candidate. Unfortunately, that leaves most people on the outside looking in and dulls civic interest. Name recognition alone drives many sound community members away from seeking office.

Even at the municipal level, some turnover and diversity can be immensely advantageous. Like those trying to enter an overpriced housing market, political novices who attempt a run at council face overwhelming odds as they are stacked against name recognition.

Perhaps public financing of each campaign could help reduce the advantages of incumbency. However, this adds to the tax bill and increases the wrangling over who can donate. Fairness dictates that term limits are needed in order to restore some sense of equal access for all candidates. This is only possible if we remove the imbalance of notoriety enjoyed by incumbents.

TERM LIMITS ARE NOT FAIR.

We are attempting to build a merit-based society. Term limits do not advance meritocratic principles. Term limits prerequire people who have demonstrated themselves as qualified to step aside. In many cases, options to replace an outgoing representative will not be as qualified or skilled as the incumbent.

It may be presumptuous to suggest term limits work. However, removing entrenched politicians from one office does not preclude them from running for a different position. When a local politician transitions to provincial/federal service, she/he must change his/her mindset. He/she must also establish new relationships and master varying protocols. They also must return to listening to the needs of their new constituents.

The purpose of electing officials is not to turn politics into a career. Consistent turnover and representation coming from different fields are necessary. Term limits would increase representation from many qualified people in business, healthcare, science, trades. Many of these people could find a short-term commitment to public service more doable. Term limits are a largely American idea that has met great opposition in Canada and elsewhere. The time has come for democratic renewal. Term limits are an imperative first step.

TERM LIMITS DO NOT WORK.

There is no precedent through which we can recognize term limits as being effective. Canada has never instituted term limits. Term limits are impractical in parliamentary democracy in which a term only has no static minimum length. If term limits were applied in a Canadian context, they would do little to address the much bigger issue of representatives all but formally appointing their family members/trusted aid as successors.

In the United States, term limits have not facilitated diverse, fresh and vibrant candidates. At times, it appears as though the nation is disproportionately led by unpopular octogenarians advocating positions that alienate many citizens. This trend shows limited signs of imminent breakage.