Everything you need to know about Niagara’s 2022 municipal elections 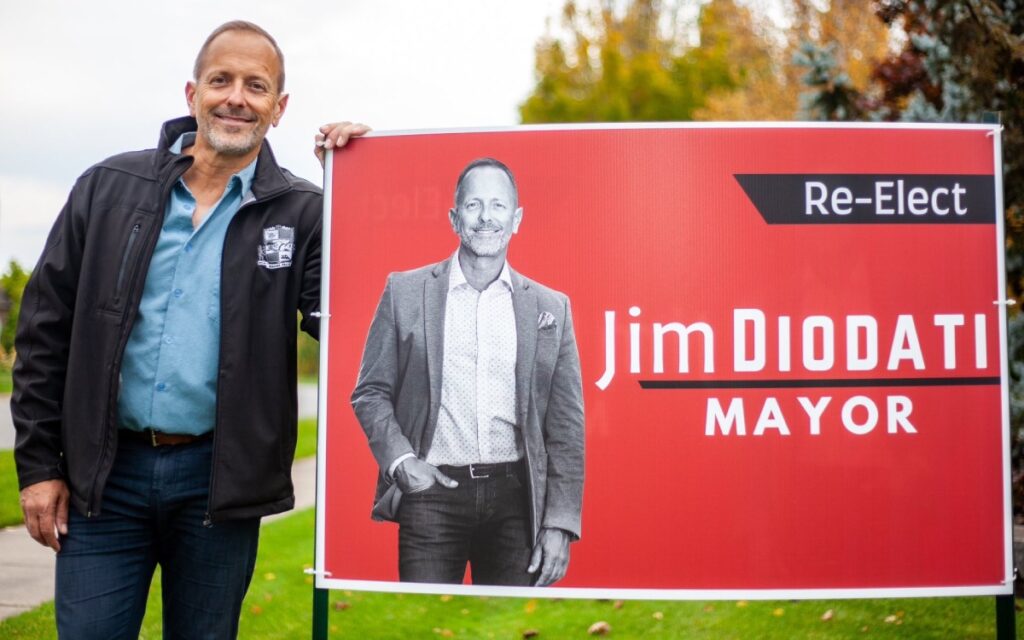 A rundown of some of the top headlines and key results from around the region. Photo credit: Twitter/Jim Diodati

As expected, incumbent mayor of Canada’s Honeymoon Capital Jim Diodati once again swept into office with relative ease, securing nearly 70 per cent of the vote (his nearest competitor had less than 10).

In his acceptance speech at Saint George Serbian Orthodox Church’s parish hall on Montrose Road Monday night, Diodati, who has been mayor since 2010, highlighted some of the city’s progress over the last 12 years and noted major future projects, saying “our best days are yet to come.”

At the regional level, incumbent Bob Gale will return for a third term. The former Ontario PC candidate will be joined by former Liberal MPP Kim Craitor and Joyce Morocco, both of whom have served multiple times at the local council level in the past.

In his address to supporters at Cold Break Brewery, Siscoe said he felt “amazing” and was proud of the “positive” campaign he and his team ran.

Siscoe replaces two-term mayor Walter Sendzik, who did not run for re-election.

Former long-time Liberal MPP and incumbent regional chair Jim Bradley handily topped the six winners for regional council, earning 6,000 more votes than his nearest competitor in Laura Ip. Bradley, who will be in his early 80s before next term’s end, reportedly plans to seek the regional chair again.

Joining Bradley and Ip will be newcomers to the regional scene Haley Bateman, Peter Secord, and Sal Sorrento, along with Tim Rigby. Incumbent Brian Heit did not win re-election.

Incumbent mayor Frank Campion earned a third straight opportunity to lead the city’s council over the next four years, topping his one and only challenger Jeff Walters by nearly 20 points.

No less than 10 of Welland’s current 12-person council were returned for another term. The only newcomers at the table this fall will be Sharmila Setaram in Ward 3, who beat out incumbent councillor John Mastroianni by a mere 36 votes, and Jamie Lee, who edged out incumbent Jim LaRouche by an unbelievable one vote.

At the regional level, Pat Chiocchio and Leanna Villella will once again accompany Mayor Campion to Niagara Region headquarters next term.

In a highly anticipated contest between controversial incumbent mayor Betty Disero and incumbent regional councillor Gary Zalepa, Niagara-on-the-Lake residents gave the green light to lead the small town over the next four years to the latter.

Zalepa, a lifelong Niagara resident and perennial community volunteer, topped the Toronto-transplant by a convincing 15 points, securing nearly 50 per cent of the vote.

In speaking to supporters at the Niagara-on-the-Lake Community Centre Monday night, Zalepa said his team had “no idea which way it was going” and that he felt “overwhelmed” and “excited”.

Zalepa will head up a council made up of equal parts incumbents and newcomers. Returning to the table this November will be Erwin Wiens, Gary Burroughs, Wendy Cheropita, and Sandra O’Connor. They will be joined by first time members Tim Balasiuk, Nick Ruller, Adriana Cater, and Maria Mavridis.

Charles, who hadn’t spoken to his brother in three decades, couldn’t stomach seeing his sibling get acclaimed as mayor so he threw his name in the hat at the last minute.

The pair apparently have no plans to make amends now that the race is over, with Bill telling CTV News “I don’t speak to my brother.”

In another interesting newsmaker from the small lakeside community, the unofficial results reveal that Ward 2’s second council seat is still very much up for grabs as Eric Beauregard and incumbent Angie Desmarais ended Monday night tied at 342 votes a piece. The results will need to be recounted, tripled-checked, and made official before a winner can be determined.

Byslma was bested by council rival Cheryl Gannan, who won a resounding 68 per cent of the vote versus Byslma’s 27 per cent.

Sitting mayor and regional councillor for Fort Erie Wayne Redekop and Tom Insinna both managed to easily stave off their respective PPC challengers in Peter Taras and Peter Nolan.

Redekop secured 67 per cent of the vote, Insinna 68 per cent.

Taras ran for the People’s Party of Canada in the 2021 federal election, earning 8.4 per cent of the vote, well above the party’s overall share. Nolan was Taras’ campaign manager.

A former RCMP officer, Gibson said he was happily retired before being elected in 2018 and will happily return to the retired life this fall.

GRIMSBY, LINCOLN, PELHAM, and THOROLD – All mayors remain, plus a few loose ends

Mayor and regional councillor Sandra Easton and Rob Foster were both acclaimed in Lincoln before Monday’s election. Only one fresh face will join the town’s council this fall, as Anna Murre replaces Paul MacPherson in Ward 3, who didn’t seek re-election.

Marv Junkin won a second term as mayor in Pelham, as did regional councillor Diana Huson.

Terry Ugulini was returned as mayor of Thorold, as was regional councillor Tim Whalen.