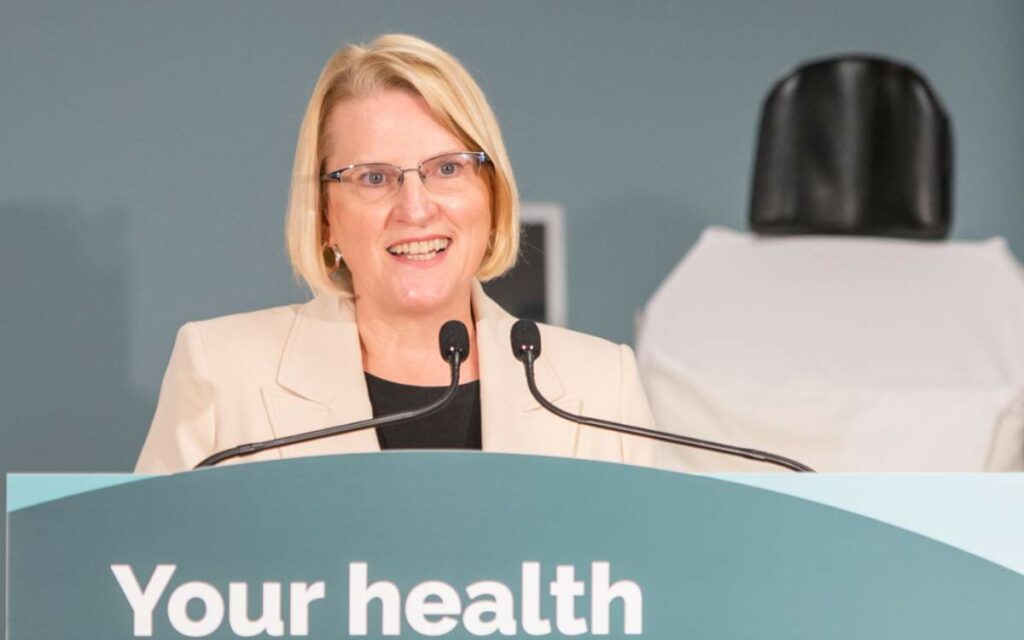 Though some unions, certain public officials, and political activists may not like the increase in private sector provision of health care in the province, a greater mix of public and private providers will bring better outcomes for suffering Ontarians. Pictured is Ontario Minister of Health Sylvia Jones. Photo credit: Twitter/Sylvia Jones

That sound you hear is heads exploding all over the place as Ontario makes moves to incorporate more private sector provision of health care into our current badly broken public system. The exploding heads belong to those groups and individuals who have a vested interest in the current system – mostly public sector health care unions, some doctors, and leftists who believe that government provision of any service is preferable to provision by the private sector.

The hypocrisy of these groups is shameful. Surely, they must know that the most effective health care systems in the world contain a mix of public and private providers, all within a universal system, and get better health outcomes at lower per capita cost than Canada. They must also be aware that about 40 per cent of health care’s services in Canada are currently provided by the private sector, from a range of diagnostic tests to walk in clinics to just about every doctor’s office, which is usually an incorporated private business. Yet all of these services are paid for by the public purse, and fit seamlessly with the public parts of the system.

The other thing that has been exploding in recent years is the myth that Canada has one of the best health care systems in the world. Even if people had not read any of the multitude of international comparative studies that consistently rank Canada as one of the poorest universal health care systems globally, the growing number of horror stories about people dying in emergency departments, languishing on waiting lists for years, and missing crucial diagnostic tests or procedures that could have dealt with health problems before they became critical, have gotten people’s attention. And many Canadians have first-hand experience themselves or with a family member that has been disappointing at best, and often much worse.

The misinformation about Canada’s health care system, spread by those who fight change, is finally being exposed. While the critics are claiming that more private clinics will mean people paying out of pocket, the Ford government has repeatedly said the expansion of private sector health care providers will be fully covered by OHIP. There are currently private clinics that operate this way, one being the hernia clinic Shouldice, which has been around since the Second World War and is privately owned yet with costs fully covered by the public system. It also happens to be among the best in the world for hernia repair.  Ford’s plan is to establish more specialized clinics for such procedures as cataract surgery, knee and hip replacements, and various diagnostics such as MRIs and CT scans. These are all areas with huge waiting lists that need urgent attention.

One advantage of clinics that has not been sufficiently publicized is that the likelihood of catching some contagious virus or other bug, and complications from surgeries, is much lower than in a hospital where people with many different illnesses are all in the same facility. One reason countries with an independent system of private clinics handled the pandemic better than Canada was that they allocated the Covid cases to the hospitals, while the clinics continued to perform their surgical specialties, and didn’t have to cancel surgeries as we did in Canada.

Another myth promoted by the enemies of change is that Ontario’s innovations are something new.  The truth is that other Canadian provinces have been expanding private clinics for years, with positive results. For example, Saskatchewan has increased its reliance on private clinics in recent years. That province found that although people were initially hesitant about going to a private clinic, likely because they had been brainwashed for years that the private sector was bad, once someone experienced such a clinic they were very favourably impressed. And this may be the thing those fighting change in the system are really worried about – that private clinics will provide such great service and quality that people will start to understand exactly how much the public system has been letting them down. It was almost comical that federal NDP leader Jagmeet Singh recently criticized the Conservative governments of Ontario, Alberta and Saskatchewan for promoting private clinics, yet omitted the fact that NDP British Columbia also found relying more on private providers was a positive for their province.

The groups opposing any change also use the argument that there is no way a private clinic can provide the same procedure as a hospital and make a profit without increasing the costs to the system. Yet it has been shown that a clinic that specializes in a particular procedure can be much more efficient than a hospital and actually reduce the cost of these procedures while maintaining quality and have room for a rate of return to owners or investors. In addition, a private clinic that doesn’t have to deal with the obstructionist public sector unions, who consistently fight innovation and protect incompetent employees while not adequately rewarding excellent employees, will have no problem being much more efficient than sluggish union-dominated environments. Adding more competitors to the health care mix will also encourage innovation and cost savings.

Over the last few decades, the conclusions of various governmental committees, research bodies, Royal Commissions and others have all agreed that the entry of more private sector providers into Canadian health care was a necessary structural change if our universal system was to survive for future generations. It is tragic that we actually had to see the breakdown of the system, to the point that people have actually died waiting for care, before political and public opinion would accept this change. But thankfully the change is now underway, and once implemented will not be reversed. Better late than never.