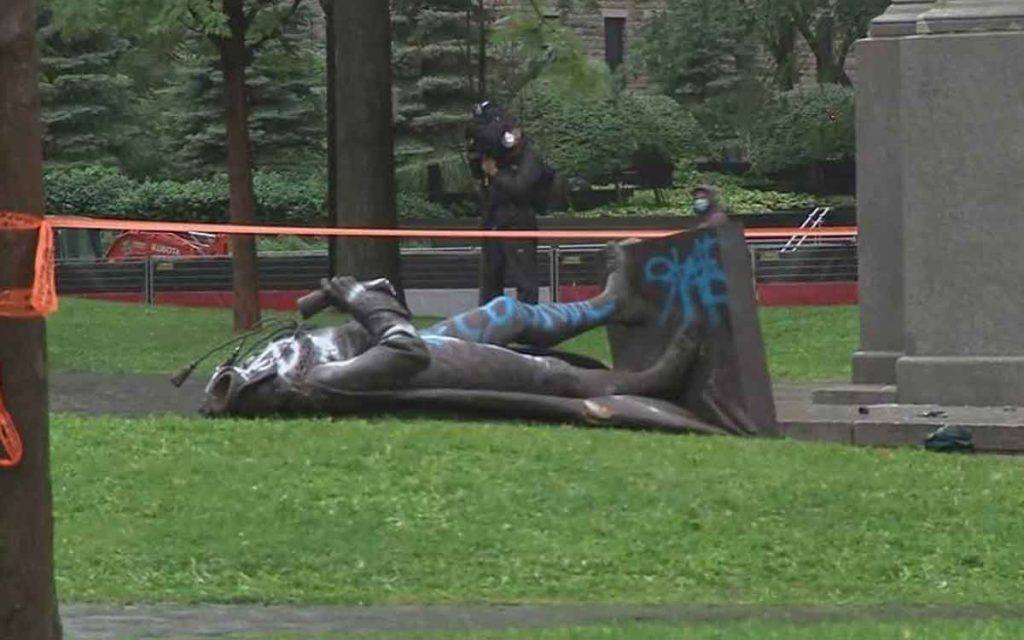 Protesters demanding police forces be defunded brought down a historic statue of Sir John A. MacDonald over the weekend in Montreal. It is the latest in a series of acts that have seen monuments destroyed or defaced by protesters demanding change, in an increasingly tense political climate both North and South of the Canada-US border.

The oft-vandalised statue of Canada’s first Prime Minister was pulled down during protests Saturday, being decapitated in the process. It was then smashed into pieces and spray painted before police intervened and cordoned off the area. No demonstrators or law enforcement were harmed, but the statue may take weeks or months to repair.

Demonstrators had gathered as a part of cross-country protests advocating to defund police services. The movement to either reduce, or eliminate police funding has been growing since the killing of George Floyd during an altercation with Minneapolis police. Viewpoints of protesters range from redirecting funding to more community resources or mental health training for officers, to completely disbanding traditional law enforcement as a means of counteracting systemic racism within policing.

While MacDonald has no ties to the current debate around police funding or the killing of Floyd, many protestors feel that his public honoring is representative of systemic racism throughout Canada’s institutions, including government. MacDonald has been the target of a number of monument attacks or “renaming” debates, because of his treatment of Indigenous peoples when he served as Prime Minister in the late 1800s. Under MacDonald’s watch, Indigenous peoples were actively starved and left with minimal supplies for harsh winters for years at a time. Protesters today take issue with the glorification of someone who helped initiate many of the policies that have kept Indigenous peoples segregated and disadvantaged for over two hundred plus years.

This is not the first instance of a Sir John A. MacDonald statue or monument causing controversy. Victoria city council voted to remove a statue from its grounds in 2018. A petition was launched earlier this summer to remove a prominent MacDonald statue from a park in Kingston, Ontario. A number of establishments named after MacDonald have also faced demands to change their names, and consider renaming after other historical or contemporary figures with less problematic pasts.

Both “sides” of the statue debate were evident in the response from various Canadian politicians over the weekend and on Monday. Progressive-minded Mayor of Montreal, Valerie Plante, acknowledged MacDonald’s complicated legacy in a series of tweets on the weekend, but ultimately condemned taking the statues down. Plante argues that it is better to put these monuments into context rather than tear them down, and aspire to memorialize others in addition to those with troubling pasts.

The other side of the coin is best represented by Alberta Premier Jason Kenney, who strongly condemned the “thugs” and “mob” that removed the statue. Kenney even offered to put the statue up in Alberta if Montreal was unwilling to do so. Kenney’s sentiment was echoed by other right-wing politicians including new Conservative Party Leader Erin O’Toole. O’Toole indirectly called out Prime Minister Justin Trudeau for not responding to the controversy over the weekend, saying politicians needed to “grow a backbone and stand up for our country”.

Trudeau finally broke his silence during a press availability on Monday where he was asked about the statue. Unsurprisingly, his response landed somewhere in the middle of Plante and Kenney. The Prime Minister expressed “deep disappointment” with the removal of the statue, and emphasized that vandalism would not further the causes of those seeking change. At the same time, he acknowledged that elements of MacDonald’s past deserve a critical eye and the country still has work to do.

Political calculations abound for politicians deciding whether or not to weigh in on this increasingly fractured debate. Trudeau’s delayed entry to the discussion was the likely result of attempting to balance his role as chief champion for Canada with the reality that a significant part of his voter coalition likely sides with the protesters who removed the statue. Meanwhile, for Kenney and O’Toole, the reward of cornering Trudeau and the Liberals to cast judgement on these actions outweigh the risks of being seemingly insensitive to the concerns raised by protesters.

Ongoing demonstrations, rallies and protests south of the border are likely to have a continued spillover effect in Canada, particularly in the lead up to the US election. Canada’s politicians will need to be wary of how an increasingly polarized political climate in the US will feature not just in domestic politics, but the role it plays in Canadians tuning out of politics altogether. 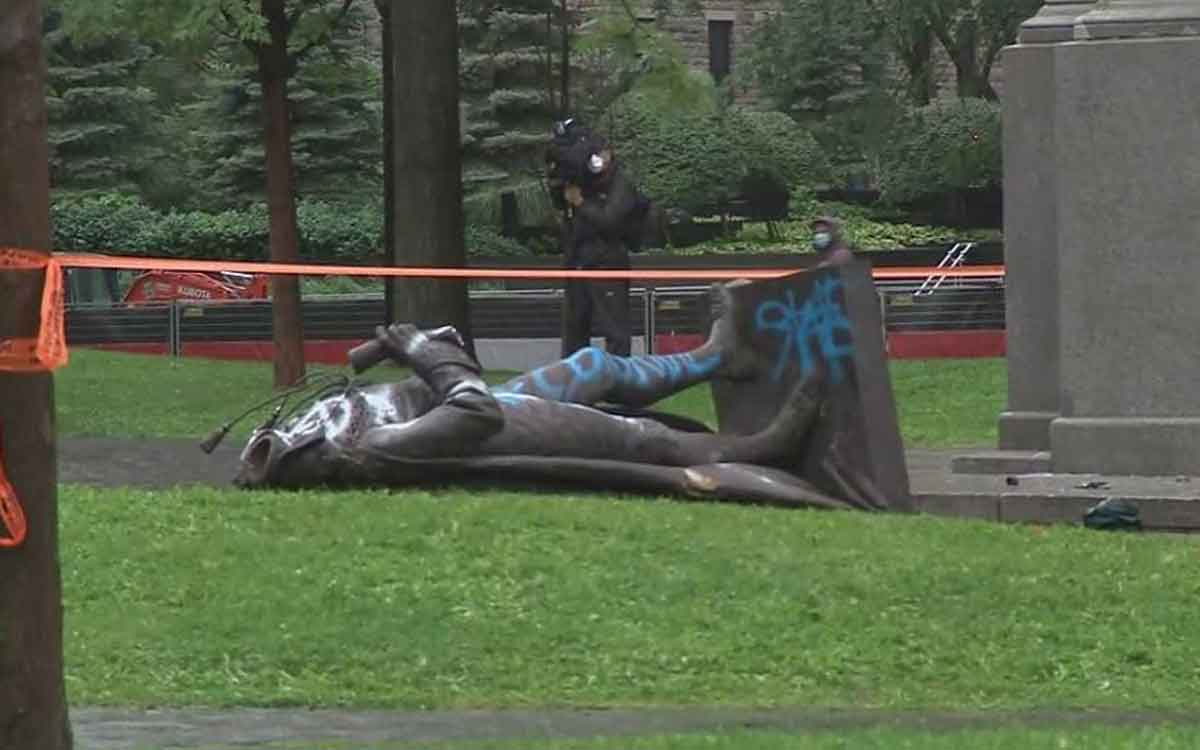