Far from a shoo-in, PCs will have to earn another mandate 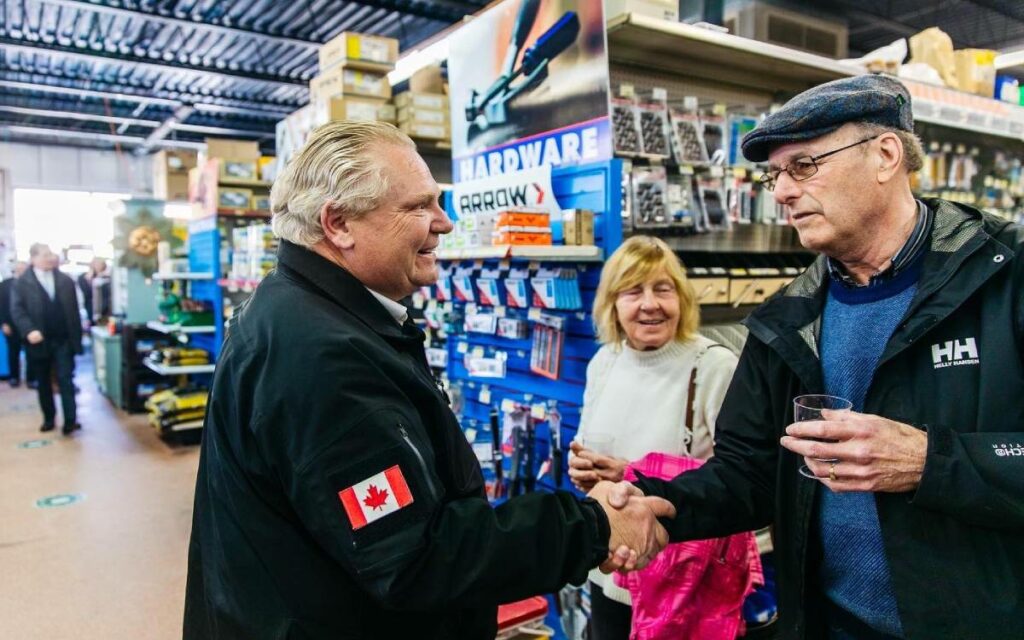 Heading into the June election Doug Ford and his team have a good shot at forming government again, but they’ll have to work for it. Anything can happen in Ontario politics, and a well-run campaign is necessary to any victory. Photo credit: Twitter/Doug Ford

Campaigns matter. Just ask former premiers Mike Harris and Bob Rae, or even Prime Minister Justin Trudeau. All were written off as long shots by most pundits at the beginning of their campaigns and all ended up as solid winners.

Some polls earlier this month, showing Premier Doug Ford’s Tories in the lead, prompted a few pundits to declare the Ontario government was most likely a re-election shoo-in.

But poll results are notoriously fluid, particularly these days, given the cranky mood of voters and the impact of social media. And sure enough, just days later, more polls showed that it was shaping up to be a tight race between the premier and his Liberal opponent Steven Del Duca, with NDP Leader Andrea Horvath bringing up the rear.

As one former politician famously stated, the only poll that matters is the one held on election day and there is great truth in that. So, hold on to your hats as the election campaign gets underway at the end of this month. We will no doubt be deluged with polling and predictions.

That being said, Ford does enter the race with the strongest hand at this point. What he and his campaign team choose to do with it, remains to be seen.

First is the historical quirk of Ontario’s voting history. They tend to choose opposing parties to serve in Ottawa and in Ontario. Having just re-elected Justin Trudeau’s Liberals late last year, they are now highly likely to choose Ford again, if those historical trends hold true.

Secondly, Ontario voters are usually inclined to give the governing party a second mandate, an opportunity to “finish the job” as it were. It didn’t work for Rae, of course, as his government so badly handled things that the populace was eager to throw him out in exchange for Mike Harris and his “common sense revolution” campaign platform.

While Ford had a rocky first year, he has managed to settle down. Most political leaders do tend to benefit from time in the job. And new political staffing and a shuffle of his cabinet to take better advantage of the stronger performers in his caucus made a huge difference. In addition, he has that invaluable political trait of being seen as “authentic” by many voters.

And then there is the pandemic. Again, there were some early missteps, but on the whole, he largely managed to tread carefully between those for whom no lockdown or mask mandate was too strict and those for whom any lockdown or other public health measure was too much.

The government has also launched an aggressive voter wooing campaign with strategic announcements accompanied by big checks for priorities that tend to matter to most voters — healthcare, long term care, transit and transportation, with a strong emphasis on jobs and the economy.

But the two opposition parties are also already in high gear. Both have been making almost daily announcements of various planks that will be included in their campaign platforms. So far, we have had such disparate promises as banning handguns, expanding home care and promises to plant millions of trees from the Liberals, with the NDP offering to top the Liberals’ tree planting numbers and introduce a universal pharma care program and free birth control.

How all this rolls out remains to be seen. The performance of the leaders will matter.  The kind of campaign each runs will have an impact. And then there is always the unexpected external event, the fatal verbal slip-up in the leaders’ debate, the damaging campaign leak. The list goes on.

So, for those following this campaign, stay tuned. It promises to be an interesting run up to election day on June 2. And don’t put your bets down yet.