Father and Son Trudeau, and Canada Then and Now 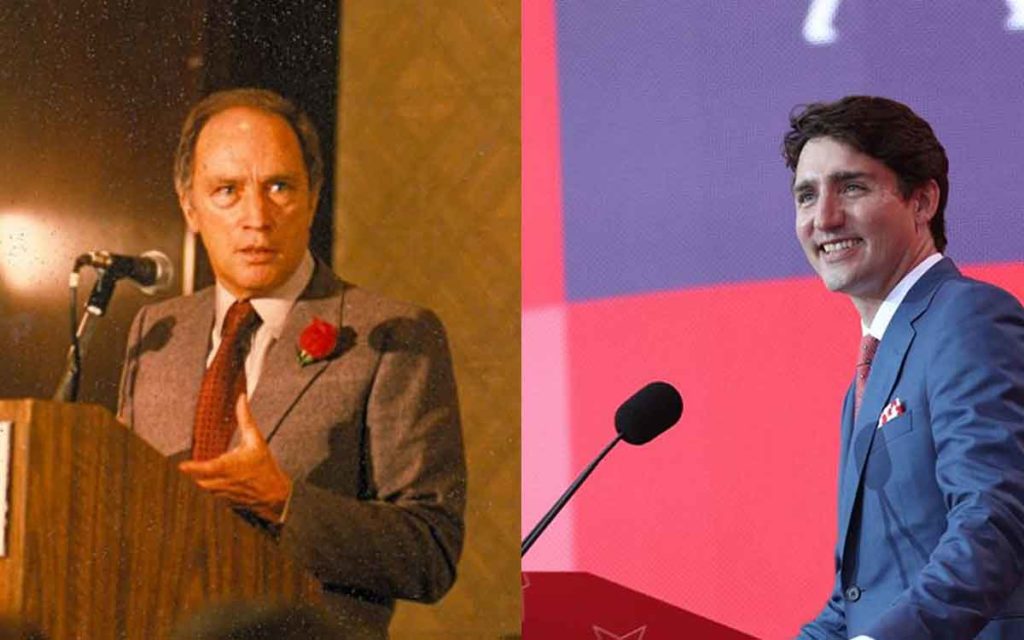 Former Timiskaming MP John MacDougall remembers the overwhelming feeling of relief on February 29, 1984, the day when PM Trudeau took his walk in the snow.

Sitting in the House of Commons chamber, the rookie MP representing an immense northern Ontario riding stretching from Lake Temagami to Moosonee, sensed Canada was teetering on a precipice – and from his vantage point, MacDougall worried that Pierre Trudeau was nonchalantly (perhaps intentionally) pushing the country over the edge. On that February 29th, he along with many Canadians were relieved to learn Trudeau was choosing to leave politics and walk away from the mess he had created.

In 1982, John MacDougall was swept to his bi-election victory on a wave of anti-Trudeau sentiment. Many Canadians had grown angry at how the Trudeau Government altered the face and character of Canada — Trudeau marshalled policies that buried the country in debt, weakened the country’s resource and business sectors, and gave rise to regional tensions and a separation movement. Today, MacDougall assesses the state of his country and, sadly, he sees a similar landscape. In 36 short years, now by a hand of a younger Trudeau, history is repeating itself.

“Pierre Trudeau was a brilliant individual; his son not so,” says MacDougall, who is animated when comparing and contrasting the father and son Trudeau – and Canada then and now. “There are two striking similarities between them that sum up their approach to governing. There is an arrogance in Justin that I saw in his father. It’s a disrespect for anyone with a contrary view. Pierre had a dislike for Parliament and he didn’t like Question Period and was often rude to MPs. He ran the country from his Prime Minister’s Office. It is fair to say Justin holds that same contempt for the House of Commons. He would rather speak with Gerald Butts and his PMO staff than consult with MPs.”

“Both also love big government – the bigger the better. They like a model of government like China where leaders dictate, where they can put in place laws and regulations and government programs that will control people from cradle to grave. Of course, big government comes at a cost. But that doesn’t matter for either of them. With Justin and (Bill) Morneau I hear echoes of Pierre’s finance minister Alan MacEachern when he laughed at us and said “What’s a deficit?” They have no regard for the taxpayer, no regard for the country’s economy. It is likely due to Trudeau’s upbringing.”

MacDougall won the ’82 bi-election and was re-elected in ’84. In 1988, he was the only PC MP from northern Ontario to be returned to Ottawa in the great Canada-US Free Trade election, overcoming the strong fears of what the new trade deal might mean for the resource-based regions of the country. MacDougall spent his time in Ottawa championing both the development of resources and the livelihood of single-industry small town Canada. Today he is troubled for northern Ontario and rural Canada.

“Pierre wanted control of the resources and he attacked the oil and gas sectors with the National Energy Program. Justin is even more damaging to the sector. This government is not listening to resource industries. It is introducing new regulations and new approval processes that will not permit industries to do their jobs. I see that Justin spoke at the Prospectors and Developers (Association of Canada) conference and said it is time for Canada’s industry to transition from a resource economy. Seriously, Canadians are to transition from these industries when countries such as China, Russia and India increase their wealth from developing resources? Like Pierre, Justin doesn’t consider the impact his policies are having on the resource sector, on rural Canada. I’d like to ask him what is going to happen to the hundreds of single-industry towns dependent on resource development across our country?”

MacDougall acknowledges politics today is a lot different from when he was in Ottawa. “In many ways the world has gotten smaller. There are more outside influences factoring into Canada’s politics. Lobbyists and special interest groups are well funded and are involved in every aspect of our government. We have seen international lobbyists impacting our country’s economy – for example, how the Rockefeller Foundation is closing down Alberta’s oil sands. It has become much harder for MPs to have a voice on issues affecting their ridings. There are too many hidden agendas being played out by people beyond our borders – including at the U.N.”

“MPs’ voices has also been silenced by today’s Party discipline. Pierre Trudeau called MPs “nobodies” and his son has the same attitude: MPs are to be seen and not heard. I was fortunate to serve under Brian Mulroney who respected his MPs’ concerns for their constituents. We had votes in the House where we could vote our conscience and vote for our constituents. Today, every vote is whipped and the Liberal backbencher must support the Government or else. If you represent a mining or oil town, you cannot speak up for your constituents’ concerns about the damage the carbon tax is doing to your community. The strict party discipline is one-step closer to dictatorship, to Trudeau’s China-styled government.”

Asked to sum up his thoughts on the Trudeaus – both Senior and Junior – MacDougall is reflective, “I have been fortunate to live and work through the years in a Canada that is a source of great pride. But today I look at the next generation, and the debt and counter-productive policies in place in Canada, and I know they will not have the same opportunities for work or quality of life. I do feel for the younger generation and I feel for those in rural Canada. I have that same, sick feeling in my stomach that I had in 1982 when I ran. We live in the greatest country, yet we are squandering Canada’s riches.”

John MacDougall’s remarks are recorded from two conversations this past week, on the anniversary of PET’s “walk in the snow” and on March 3rd.