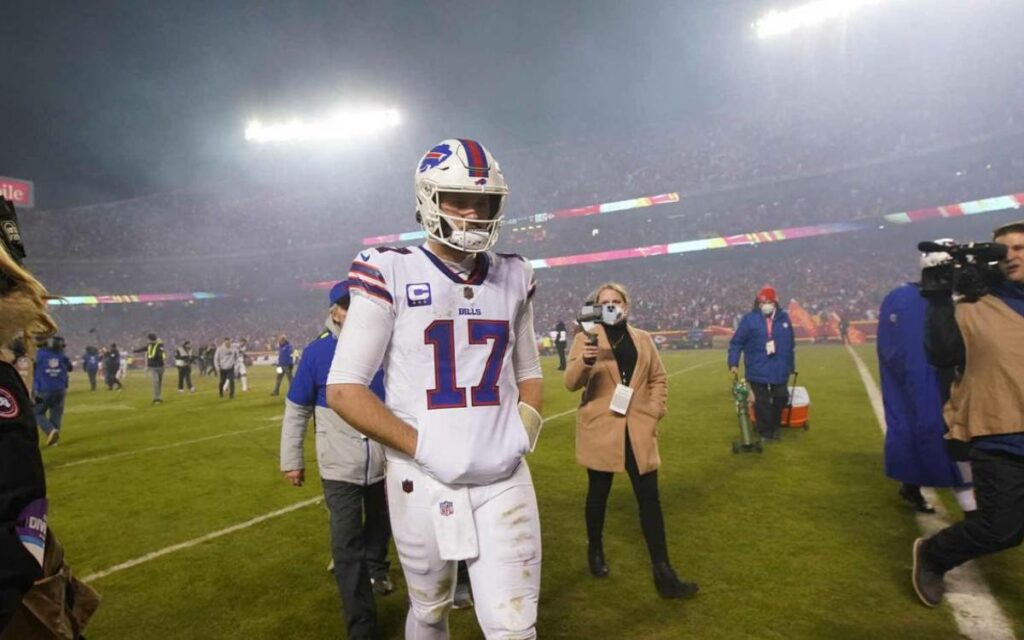 Buffalo Bills quarterback Josh Allen exits the field after a heartbreaking OT loss to the Kansas City Chiefs Sunday night. The Bills were the only underdog team not to win on Divisional weekend. Photo credit: Buffalo News/James P. McCoy

If you’re a Buffalo Bills fan, like many here in Niagara, your thought is likely on one thing – the darn NFL overtime rules. But if you’re just a simple football fan, or sports fan in general, you’ll likely agree – the 2022 Divisional weekend was arguably the best four games over two days the National Football League (NFL) has ever produced.

The first three games were settled on last second field goals, while Kansas City ousted Buffalo in overtime in a game this reporter called an ‘Instant Classic.’

The Bills were in fact the only underdog not to prevail this past weekend.

And full credit to Buffalo quarterback Josh Allen for not only his performance on the field in Kansas City but for his remarks afterwards as well.

“The rules are what they are, and I can’t complain about that, cause if it was the other way around, we’d be celebrating too,” said Allen, who finished the game 27 of 37 for 329 yards and four touchdowns – all to Gabriel Davis who set an NFL playoff record with the four receiving TDs.

“So, it is what it is at this point. We didn’t make enough plays tonight.”

On the other side of the field, what can you say about Patrick Mahomes?

The KC quarterback had the opportunity to celebrate with his teammates, or fans, but instead ran down Allen to praise him for the game he just had.

Mahomes numbers by the way on Sunday: 33 of 44 for 378 yards and three touchdowns.

Onto the other games, where fourth ranked in the AFC Cincinnati, behind the ever-improving Joe Burrow, took down top-seeded Tennessee 19-16.

So the final four is set.

SoFi Stadium is also the site of Super Bowl LVI (56), and that leads us to predicting its combatants.

Some are calling the Buffalo – Kansas City game as the real Super Bowl. Sure, the Cinderella Cincinnati Bengals are a great feel-good story, but KC’s prolific offense behind Mahomes – at home – will not be beat.

As for the NFC, the Rams from an all-around offense and defense perspective might have been the most impressive football team this past weekend despite the Bucs late rally. However, there is no way Jimmy Garoppolo’s 11 of 19 for 131 yards and one interception (yes that’s the numbers he had in eliminating Green Bay) will be good enough against the Rams, who feature the likes of Aaron Donald and Von Miller on defense, and Matthew Stafford, Cooper Kupp and Odell Beckham Jr. on offense.

With that all being said, enjoy the Rams and Kansas City in Super Bowl LVI. But do me a favour, don’t bet on it because after an epic weekend of football we’ve quickly learned the favorites don’t always win.