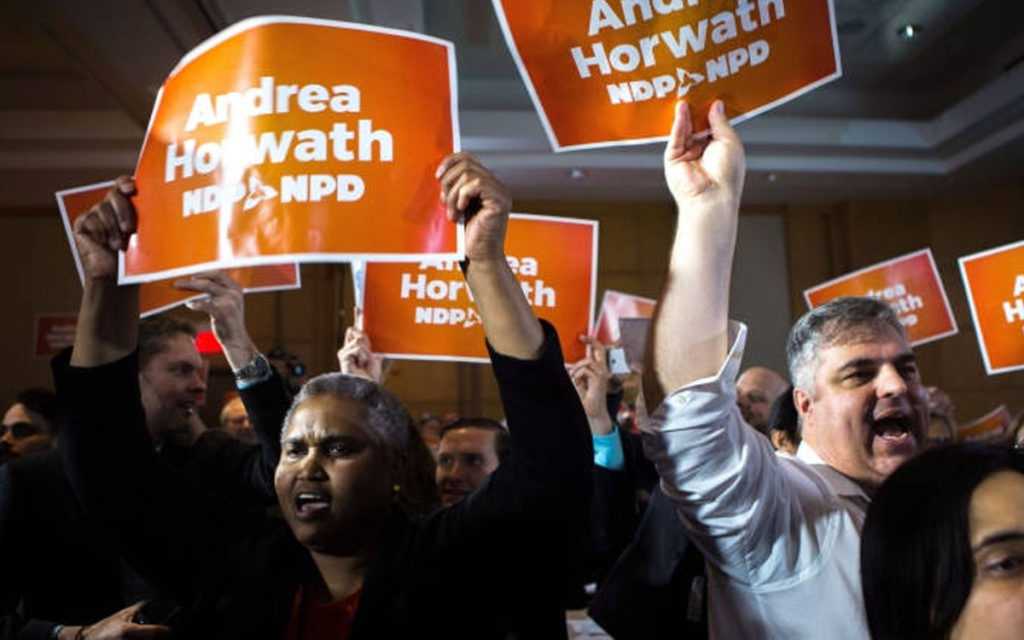 As we get closer to the June 7 Ontario election date, it seems this contest has become a showdown between the Ontario Progressive Conservatives and the Ontario NDP. It appears that the collapse of the Ontario Liberals can hardly get any worse, as recent information suggests they may only hang on to a couple of seats in the newly expanded 124-seat legislature.  If current trends hold, the Liberals could fall below eight seats and as such they would lose official party status and all of the resources that come with it.  As a final indignity, it appears that leader Kathleen Wynne stands to lose her own seat.

That the Ontario Liberals were highly unpopular has been known for some time, so the only surprising thing about this is the extreme extent of the Liberal’s demise.  What is surprising, however, is that the NDP is giving the Conservatives a run for their money. Part of the Liberal success for the last 15 years has been that they moved to the left of the NDP and grabbed a good chunk of traditional NDP voters, so it is only natural that as the Liberal brand weakened many of these votes would shift back to their traditional roots.  But polls indicate that NDP support is well above historical levels at present and has not merely regained what it lost to the Liberals in recent years.

The last time Ontario saw an NDP government in the 1990 election it came as a great surprise to everyone, including then-NDP leader Bob Rae.  Given the possibility of another NDP government in the near future, it is worth revisiting those fateful days. The Rae government came into Ontario, guns blazing; with labour union types in a number of key cabinet posts and high hopes they were finally about to realize their socialist utopia based on taxing the “rich” into oblivion, unionizing the entire province with or without its consent and big-spending government as the solution to all problems.

In retrospect it was perhaps lucky for Ontario – and very bad luck for the NDP – that a serious recession hit shortly after Rae’s election which limited his lofty ambitions. In the early days of the Rae government, Finance Minister Floyd Laughren – regularly referred to as “Pink Floyd” given his partisan leanings – confidently declared that the government planned to “spend our way out of recession”.  When that strategy blew up in their face, they actually tried to cut back on government spending in the last part of their term and the infamous “Rae Days” were born when government employees were required to take unpaid days off to save money.  That policy was probably the only sensible thing Rae did in his five years in power, but it lost him the support of his labour union buddies despite everything he had done for them during his tenure.  Rae lost power in 1995 to Conservative Mike Harris, who was stuck with cleaning up the mess left by the NDP.

The platform of the modern-day NDP under Andrea Horwath bears a striking resemblance to those policies that failed so miserably for Bob Rae back in the early 1990s. Considering the fiasco that was the Rae government, you have to wonder if Ontarians really do have such short memories that they are once again flirting with the disaster of another NDP government. Some of the same conditions prevail today as in 1990, such as an economy at the tail end of a growth cycle and a big-spending and heavily indebted Liberal government that relied on increasing taxes and appeasing labour unions. As the old saying goes, those who do not learn from history are doomed to repeat it.  Ontario voters should think back to the early 1990s and ask themselves if they truly want a repeat of that unfortunate period in Ontario history.