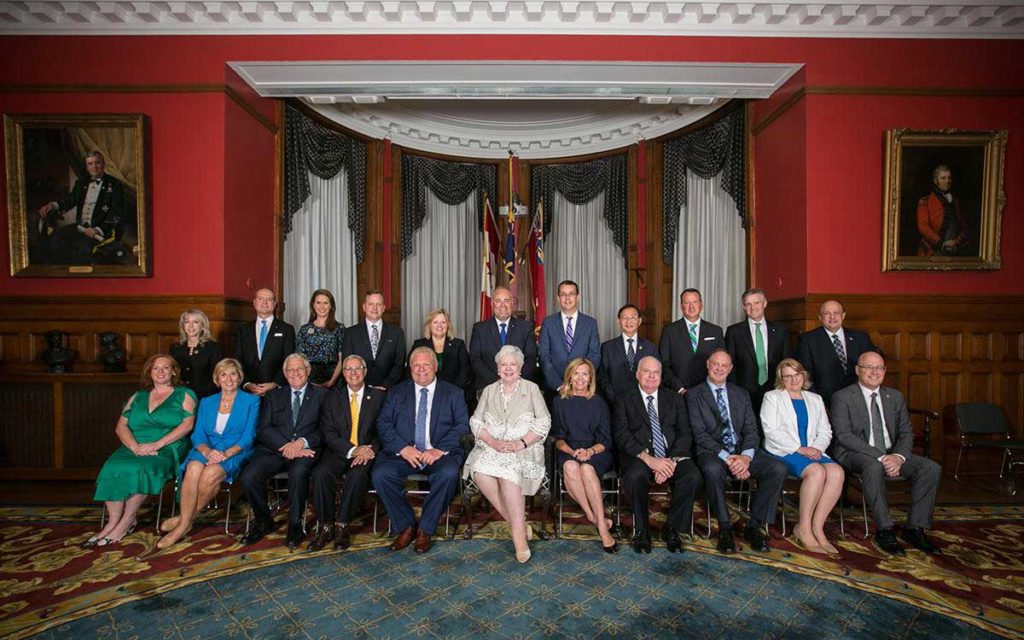 Ontario’s new PC government was sworn in today at a ceremony inside Queen’s Park.  Shortly after the official swearing-in, another ceremony was held outside on the front steps of Queen’s Park that was attended by thousands.

As expected it is a smaller cabinet than the Liberal government which had 28 Ministers. Doug Ford’s cabinet will have just 21.  It’s a strong cabinet with experienced MPPs.

Premier Ford will serve as his own Intergovernmental Affairs Minister.  Ford took former Finance Critic, Vic Fedelli, and made him Chair of Cabinet and Minister of Finance.  This choice demonstrates a great deal of political astuteness on Ford’s part.  The former Caucus had named Fedelli as Interim Leader after Patrick Brown resigned.  To have appointed a caucus favorite in Fedelli to this key portfolio will certainly go a long way in uniting the PC team.

Ford appointed former Health Critic and Ontario’s first Health Care Ombudsman and his toughest leadership rival, Christine Elliott, as Health Minister and Deputy Premier. This is another prescient appointment by Ford that will help pull his entire team together from the get go.

Niagara Falls PC candidate Chuck McShane, who attended the swearing-in ceremony said, “Vic Fedelli is a very smart guy.  No one knows more about past budgets and the state of Ontario’s books like Vic.  He’s a great guy to work with.”

Former MPP Bart Maves, who served under Mike Harris in PC governments from 1995 to 2003 and has remained a party stalwart since, thinks it’s a very good cabinet for Niagara.  “Christine Elliott is a favorite of Niagara Tories and with good reason.  Throughout her and Jim’s leadership runs, Niagara supported both and both have supported Niagara,” said Maves.   Maves said when she was a backbench MPP from Whitby Elliott often attended fundraisers and breakfast meetings for Niagara PC Associations.  She also assisted many Niagara individuals with issues they couldn’t get solved elsewhere.  Her husband, the late Jim Flaherty, was the Finance Minister in Ontario who made the decision to keep both casino’s open in Niagara Falls when the Fallsview casino opened.

Regional Councillor Tony Quirk, a former PC Ontario Board Member and a long-time Tory from Grimsby also liked the Cabinet.  “Having worked on Steve Clark’s first campaign for MPP, I am thrilled to see his appointment. It is well earned and deserved. I’m also happy about having a Minister of Municipal Affairs that understands and cares about municipalities,” Quirk said.

Peter Bethlenfalvy, President of the Treasury Board.

Vic Fedeli, Minister of Finance and Chair of Cabinet

Rod Phillips, Minister of the Environment, Conservation and Parks