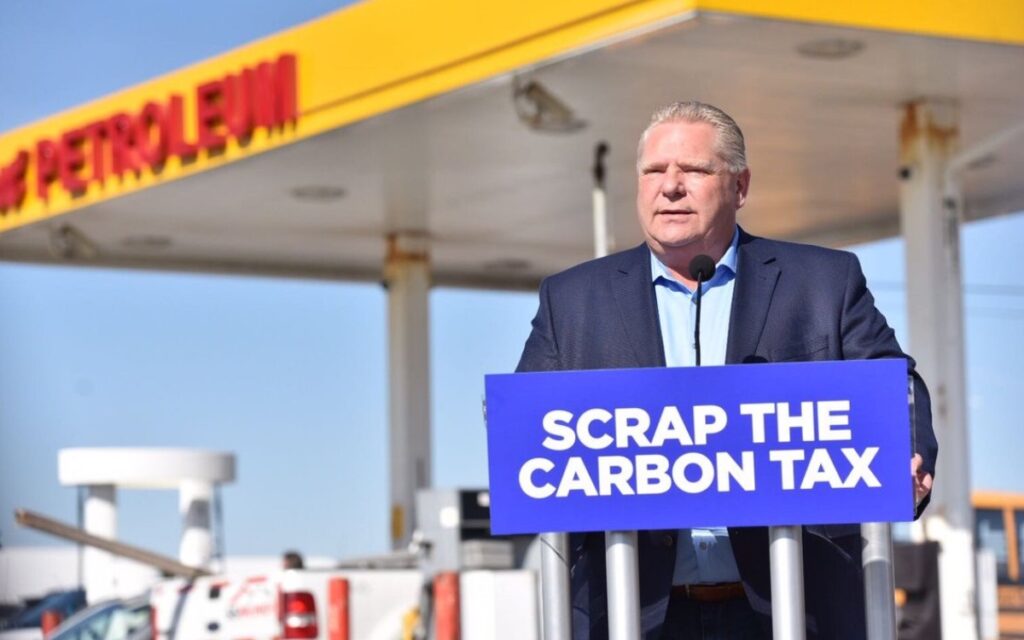 After a temporary six-month pause, the provincial gas excise tax is set to be reinstituted at the end of the year. Photo credit: Twitter/Doug Ford

Ontario drivers are now at the midpoint of the Ford government’s temporary gas tax relief period. Beginning on July 1, the provincial gas excise tax was reduced by 5.7 cents per litre for a period of six months.

Over the course of that six-month period, the average Ontario family is projected to save $190 at the pumps.

At a time when grocery bills are up a whopping $1,000 over last year, hardworking Ontario families need all the help they can get.

Since July, Ford’s gas-tax cut has helped, but there’s much more work to be done.

When Ford originally promised Ontarians he would cut the gas tax in 2018, he pledged that the 5.7 cent per litre cut would be permanent.

But when Ford finally announced he was implementing his long-awaited gas tax cut this spring, he also announced that the cut would be temporary, lasting until the end of 2022.

The permanent tax cut is desperately needed, particularly because the Trudeau government plans to increase prices at the pumps every year for the next eight years.

The carbon tax that Prime Minister Justin Trudeau imposed on Ontarians has already sent gas prices soaring by 11 cents per litre since it was first introduced.

By 2030, gas prices will have risen by nearly 40 cents per litre due to the carbon tax.

Despite the rhetoric coming out of Ottawa, Trudeau’s rebates will be just a drop in the bucket compared to his tax hikes. According to the Parliamentary Budget Officer, by 2030 the average Ontario family will be losing $1,461 a year even after federal rebates are applied.

On top of that, the Trudeau government’s so-called clean fuel standard, also known as a second carbon tax, is on its way to push gas prices up an additional 13 cents per litre. And there are no rebates on the second carbon tax.

At a time when half of Canadians are $200 away from not being able to pay the bills, the Trudeau government plans to pummel Ontarians with soaring gas prices for years to come.

That’s why Ford has to step in and rescue Ontario taxpayers.

To help offset the federal government’s tax hikes, Ford needs to make the gas tax cut permanent. The 5.7 cent per litre tax reduction would save the average Ontario family $380 over the course of a single year.

Ford could easily compensate for cutting the gas tax by showing just a little restraint in spending our hard-earned tax dollars.

New data released this month shows spending in Ontario has increased by 8.3 per cent over last year.

Ending corporate welfare would be a good way to start getting that runaway spending under control.

Since 2020, Ford has teamed up with the Trudeau government to hand billions of taxpayer dollars to electric car battery plants across the province, including handing $295 million to the Ford Motor Company, a Fortune 500 company that certainly doesn’t need any taxpayer help.

Ontario taxpayers would trade government waste for more money in their pockets any day of the week.

Ford’s temporary gas tax cut has delivered much-need relief for Ontario taxpayers. But once the new year rolls around, Ford’s relief will be long forgotten if he doesn’t get to work on a plan to deliver something permanent.

Jay Goldberg is the Ontario Director and Interim Atlantic Director at the Canadian Taxpayers Federation (CTF). This article first appeared on the CTF website on Sept. 27, 2022. Reprinted here with permission.