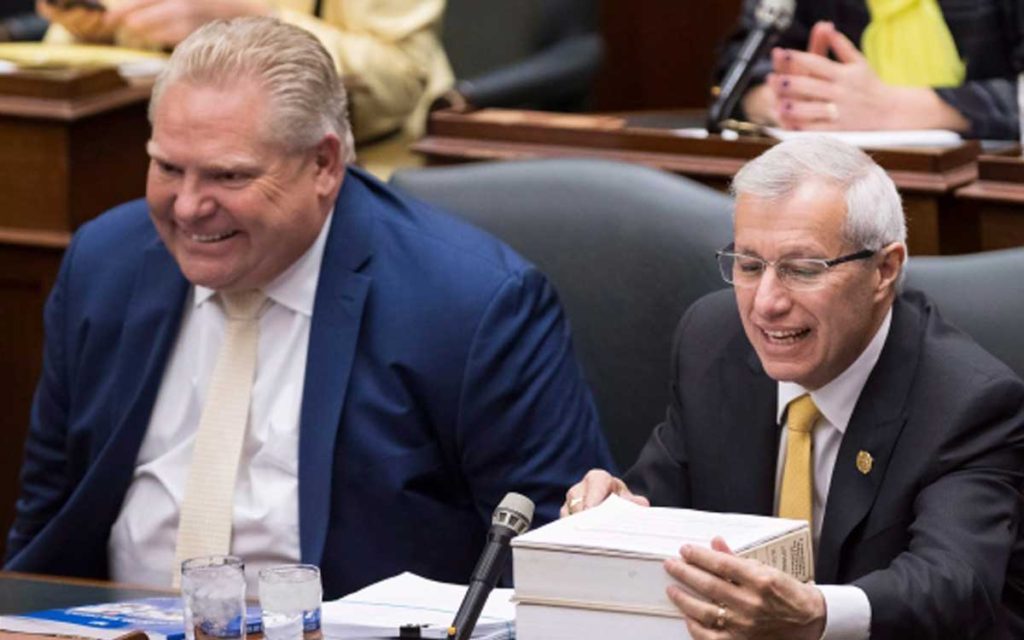 Premier Doug Ford and Minister of Finance Vic Fedeli released their first formal economic statement at Queen’s Park Thursday. Dubbed “A Plan for the People”, the statement was the first formal budgetary step in the Ford government’s implementation of its campaign commitments to provide tax relief to Ontarians, make the cost of living more reasonable, stop provincial government wasteful spending and deficits and restore trust, transparency and accountability to Ontario’s finances.

The statement was made amid the backdrop of Ontario’s auditor general, the Fiscal Accountability Office of Ontario (FAO) and the special Financial Commission of Inquiry all concurring that the previous Liberal government had not balanced the books in 2017-2018 (as they had claimed). The Commission of Inquiry pointed to a $6.7 billion deficit – and worse – that the Liberals had set the province on a path to a $15 billion deficit for 2018-2019.

“The auditor general told us in her pre-election report that the Liberal numbers were bogus – we’ve now learned the true breadth and depth,” Fedeli said.

Fedeli explained that much of the Liberal revenue assumptions were based on one-time sale of assets no longer producing cash flow, like the sale of Hydro One, GM shares, the Ontario Power Generation head office and LCBO warehouse. In addition, the FAO pointed to the previous Liberal budgets exaggerating the pace of tax revenue growth, and underestimating the growing fiscal impact from the Fair Hydro Plan, as well as declining equalization payments from the federal government.

The Tories inherited $347 billion in public debt from the previous government: over $24,000 for every man, woman and child in Ontario. “The magnitude of our fiscal challenge is real. It will require difficult decisions as we work to get Ontario’s finances back on track,” said Fedeli. “This government believes balancing the budget and reducing Ontario’s debt burden is not only a fiscal imperative, it is a moral one.”

During the campaign, Ford said he would find 4 per cent savings in Ontario government spending on his way to balancing the books. In his statement, Fedeli highlighted that the Tories had already found $3.2 billion, or about 2 per cent, in program spending savings, while not reducing front-line services. But this year’s deficit only falls to $14.5 billion due to the aforementioned declining revenues.

The statement also pledged to take action on the high cost of housing by increasing supply and to exempt new rental units from rent control. It pointed out that by repealing the Liberals’ Bill 148 passed in 2017, they would reduce the costs the bill imposed on employers by $1.4 billion in 2019.

The statement also promised expanded hours for alcohol sales across the province; to reverse recent tax increases imposed by the previous government, including the tax increase to beer and a small business tax increase. It also pledged to eliminate the taxpayer subsidy for political parties.

Finally, the Tories also pledged to cut into Ontario’s mountain of red tape by reducing it by 25 per cent by 2022.

The Canadian Taxpayers Federation, an organization founded in 1990, whose principle aim is to push for lower taxes, less waste, and accountable government, praised Fedeli’s fall economic statement for its focus on respect for taxpayers.

“We’re pleased that the government is showing some spending restraint – this has been missing for far too long.”

“We are happy to see that this government seems to understand the problems associated with massive repeated deficits, and that they’ve already made $500 million in progress,” said CTF Ontario director Christine Van Geyn.

“There is a lot of great news for taxpayers in today’s baby budget,” she said. “Low-income workers across Ontario will benefit from the tax cut announced today, which will save individual workers up to $850 per year. Letting the 1.1 million low-income workers in Ontario keep the income they earn is the right thing to do.”

NDP MPP Sandy Shaw spoke in opposition to Fedeli’s statement: “There’s a lot of talk now that you are talking about an income tax break, or zero income tax, for low-income people, but you’re talking about people who earn so little that they in fact don’t need a tax break.”

Although overall the CTF was pleased with the announcement, the organization did not give Ford and Fedeli an unequivocal ‘A’. It lamented that the statement didn’t provide a timeline for deficit elimination. “Taxpayers should continue to insist the details for this plan be released with the 2019 budget. If the Ford government is serious about deficit elimination, taxpayers need action within this term,” concluded Van Geyn.