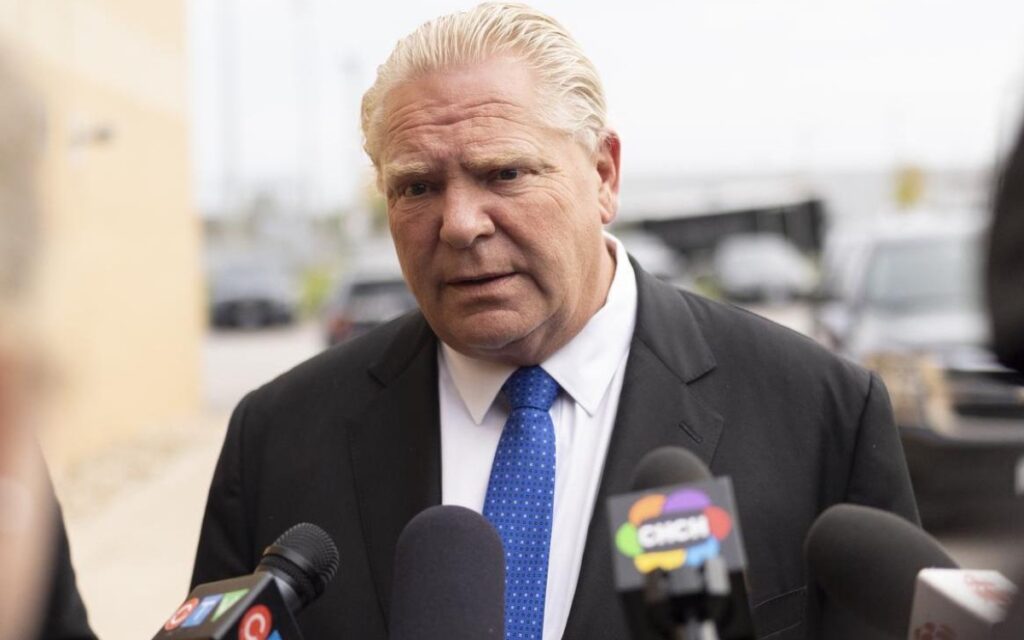 To date, Ontario’s Premier has resisted all calls to take part in the public hearings currently underway in Ottawa. Photo credit: The Canadian Press/Arlyn McAdorey

Ford has ducked the Commission for some time, with the initial excuses that he had not be asked to appear, that it was a police matter, not a political matter, that senior Ontario bureaucrats had already appeared at the inquiry and that it was federal in nature, not provincial. When Ford was officially asked to appear, provincial government lawyers cited the old chestnut that provincial cabinet members are protected by parliamentary privilege and that for some reason there would be “irreparable harm” if Ford and then-Solicitor General Sylvia Jones were compelled to testify.

It appears that the reasons the POEC is interested in Ford’s testimony has to do with understanding his reasoning as to why the provincial government waited until two weeks after the convoy first arrived in Ottawa to invoke provincial emergency powers. As Ford has stated he supported the federal Emergency Act’s use, another line of inquiry is whether he believed provincial powers were insufficient to resolve the issue. This is a very relevant concern considering the Ambassador Bridge blockade was resolved efficiently and peacefully by local law enforcement with no need for the federal Emergencies Act.

Another question is why the Ford government chose not to participate in some meetings that took place between the City of Ottawa and federal officials during the protest. Commission lawyers have also stated that without testimony from Ford and Jones their record of events will not be complete.

Up until Ford’s recent refusal to appear, the Ontario government had been relatively unscathed by the trucker protest, and would undoubtedly like to remain that way. Ford has repeatedly stated he supported the federal government’s actions, even in the face of evidence that came out during the inquiry that Trudeau and the then-Mayor of Ottawa Jim Watson criticized Ford behind his back, with Trudeau accusing Ford of “hiding from his responsibility”.

The Ford government did eventually invoke provincial emergency powers and oversaw the resolution of the economically-damaging blockade of the Ambassador bridge – successes that the federal government had not achieved at that time. A key question that arises from Ford’s persistent refusal to appear before the Commission is whether there is some bombshell about his government’s involvement that has not yet been revealed.

Testimony at the inquiry to date has been a gong show of major proportions. This federal government has a well-documented track record of mendacity, which is coming to a head in this inquiry into the invocation of the most extreme breach of Canadians’ rights in recent memory. Virtually all representatives of the various involved police forces have testified that there was really no need for the draconian Emergency Act provisions, and that there was a plan in place to resolve the matter with existing law enforcement powers that was rejected by the federal Liberal Cabinet in favour of the extreme Emergency Act invocation.

As was suspected at the time, it increasingly appears that this Liberal government overreach was motivated more by a desire to heavily punish political opponents of the government than any real threat to the safety and security of Canada.

A consistent theme of the inquiry findings that should disturb all Canadians is the appalling incompetence and lack of co-ordination among all the players, from the federal Liberal politicians, senior bureaucrats at all levels of government and the various police forces. We compensate our public sector very handsomely in Canada, and there is absolutely no excuse for the pervasive bumbling by almost everyone involved.

As there are several more weeks of testimony scheduled, with some of the most high-profile participants yet to come, we will undoubtedly hear many more disappointing revelations. Interestingly, one of the key players that has come out of the proceedings to date looking pretty good is the Ontario Provincial Police, whose intelligence information early in the convoy’s existence proved quite accurate yet was ignored by other law enforcement personnel. You’d think Premier Ford might want to take some credit for that rare accomplishment in this epic series of erroneous judgements.

As there is no indication POEC lawyers plan to give up chasing Ford and Jones, it is possible but by no means certain they will ultimately have to appear before the Commission. Doing so at the outset without all of these attempts at evasion would seem to have been a much better strategy. Perhaps the Ford strategists are counting on the fact that Ford was just re-elected with a strong majority, and when his government next faces the electorate the memory of the Emergencies Act Inquiry will be very far in the rear-view mirror.

The motivation of the federal Liberals to highlight Ford’s reluctance to participate is clear. As almost all the testimony to date has served to make the Liberals look incompetent and dishonest, it is understandable that they will seize upon any opportunity to change the channel and foist blame onto someone else. Squirrel!