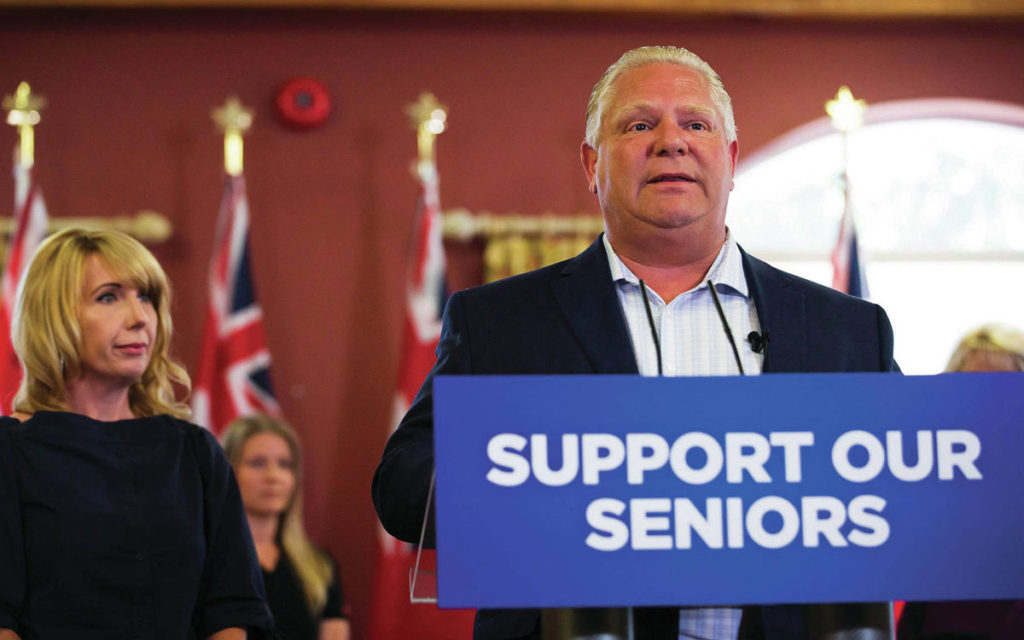 Ontario PC Party Leader Doug Ford was back in Niagara for the fourth time in this 2018 provincial election which tells many political pundits that the PCs are seeing numbers that suggest they can win what have historically been NDP and Liberal seats.

In contrast the other main party Leaders Andrea Horwath (NDP) and Kathleen Wynne (Liberal) have been in Niagara only once and not at all respectively.

Ford started his day in Port Colborne at the Port Village Retirement Home where he met with residents and staff and delivered his remarks outlining what a PC government will do for Ontario. Sticking to his theme of more jobs, more doctors, more nurses and more teachers, Ford told those in attendance that building Ontario’s economy back up to where it should be is the number one priority of a PC government.

The Conservative Leader attacked the NDP plan, which he says had a $7 billion dollar accounting error, stating the province would be ten times worse than what it is now under an Andrea Horwath NDP lead Ontario. He added that not only does the NDP plan have a massive financial error but billions of unaffordable new spending that could only be paid for through cuts and higher taxes.

During the media question period Ford was asked if a PC government would put the slot machines back into the Fort Erie Race Track to which he replied, “Absolutely we would.” Ford went on to say he is a “big, big supporter of horse racing.” The PC leader is the only one out of the three main political parties to do so.

When asked about Ford’s comment on the slots returning to the track, Niagara Falls riding PC candidate Chuck McShane said, “I’ve spoken personally to Doug about this issue and how important it is to the track and to the people of Fort Erie. He gets it and to hear him publicly announce it is great news,” said McShane.

Jeffs said her Leader is clearly showing his commitment to Niagara with an unprecedented number of campaign stops in the region. “This shows that Niagara is a priority for Doug and the PC party,” said Jeffs. “There are a lot of important issues in Niagara but specifically in the municipalities that make up Niagara Centre and Doug Ford has signaled he is willing to tackle these issues head on.”

Following media questions, Ford walked around the room and chatted individually with staff and residents, many of whom thanked him for visiting and offered their support. He and his team then made their way through downtown Port Colborne stopping in at Luigi’s Barber Shop, the Market Cafe and Lemayzz Meats where customers, employees and people walking downtown stopped to talk to the potential Premier offering enthusiastic support.

In an unofficial stop in St. Catharines, Ford played some street hockey alongside former Niagara Ice Dogs Dougie and Freddie Hamilton. He then joined St. Catharines PC Candidate Sandie Bellows to do some canvassing.

Ford Nation wrapped up their visit to Niagara with a rally in Welland at the Royal Canadian Legion Branch 4 where more than 200 enthusiastic supporters showed the PC Leader their support. Ford said a PC government will keep the Welland hospital open when the new south Niagara hospital is built. He went one step further stating they would provide the Niagara Health System with a $500,000 grant to explore ways they can maintain and upgrade certain services at the site.

“Doug has listened to the residents of Niagara Centre during his numerous visits to the Region in the past few weeks and he’s taken note that healthcare and in particular, improving services at our Welland Hospital is a top priority for the people of this area,” said Jeffs. “Tonight’s announcement is proof of that.”