Ford’s changes to Ontario health care necessary, and really not all that novel 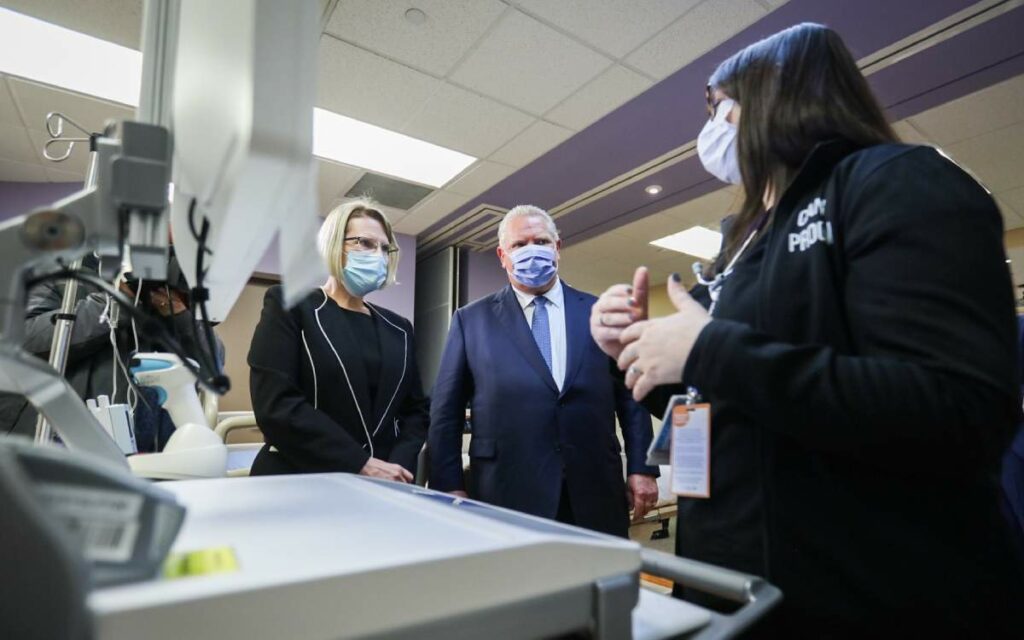 When you dive into what the Premier and his health minister actually announced last week, you could be forgiven for asking “is that all?”. Photo credit: Twitter/Doug Ford

From all the hysterical caterwauling from Opposition parties, public sector unions and other assorted government critics, you would have thought that Ontario Premier Doug Ford had turned the province’s health care system over to Walmart to run.

But when you look at what he and his health minister Sylvia Jones actually announced, you could be forgiven for asking “is that all?” In fact, you might even want to criticize the government for trying to turn a relatively modest change into a major health care reform.

So, what did the Premier and Minister Jones announce?

In a step-by-step plan over the next two years, the province is expanding the role of community clinics to conduct additional cataract and other simple ophthalmic surgeries, MRI and CT scans, minimally invasive gynecological surgeries, soft tissue plastic surgery repairs, colonoscopy and endoscopy procedures, and relatively minor hip and knee surgeries.

Many existing clinics will be expanded and new ones will be set up and run by private and public sector providers. The move will help eliminate unacceptable backlogs where literally thousands of patients have been waiting months and even years for procedures.

Before anyone else begins to hyperventilate, there are some important facts to keep in mind.

First, these are all procedures that are currently covered by Ontario’s health insurance plan (OHIP) and will remain so. The initiative is totally compliant with Canada’s Health Care Act which allows both private and public sector delivery of health services as long as said services remain paid for by the government insurance plan, not by the patient.

Secondly, there are already 900 such clinics operating in Ontario and have been for many years. They perform approximately 26,000 OHIP-insured surgeries and procedures now and are specifically regulated for quality and other issues by the Independent Health Facilities Act.

Thirdly, Ontarians already receive many insured health services through private sector delivery.  It wasn’t that long ago that we were all trooping into our local drugstores to get our COVID shots. Delivered by the private sector and paid for through OHIP, not the patient.

Many of the existing clinics, depending on the services they offer, are already affiliated with local hospitals as will be the case with new ones. In fact, a recent success story is the cataract surgical clinic rolled out by several physicians in collaboration with Windsor Regional Hospital three years ago to try and cope with their serious backlog. It is working well.

Critics also got all in a lather over fears that patients would be “upsold” or pressured to pay for additional services not covered by OHIP. What they ignore is that patients are already paying for additional services and products not covered by OHIP for a whole host of services and products; for example, private hospital rooms, special screening tests or higher-end cataract lenses. And as it is now, it will remain against the law to charge patients for insured health services.

What is clear is that our health care system – despite the efforts of many talented, dedicated health professionals – is in a mess and has been for quite some time. It took the COVID pandemic to show how bad it is and how desperately reforms are needed.

Is this a magic bullet? Of course not. Are there issues the government will need to solve as the initiative rolls out? Undoubtedly. Financial transparency, ensuring quality of care and that new clinics don’t just syphon off workers from already understaffed hospitals are potential problems.

But this and other changes are needed, and they are coming. Funding is at an all-time high at $75 billion and has gone up every year (a $14 billion increase since 2018) under the Ford government. Such increases will continue.

More and more new and expanded hospitals are being built. Rules are being changed to allow more foreign-trained health professionals to work here. Barriers ae being removed to make it easier for health care workers to come to Ontario from other provinces. Financial support is being offered to encourage more individuals to choose nursing. New compensation models will no doubt result from the many negotiations underway.

The government promised to fix “hallway medicine.” Voters expect them to do so. But let’s judge the results by their impact on our health care system, not by applying rigid ideological barriers to change.