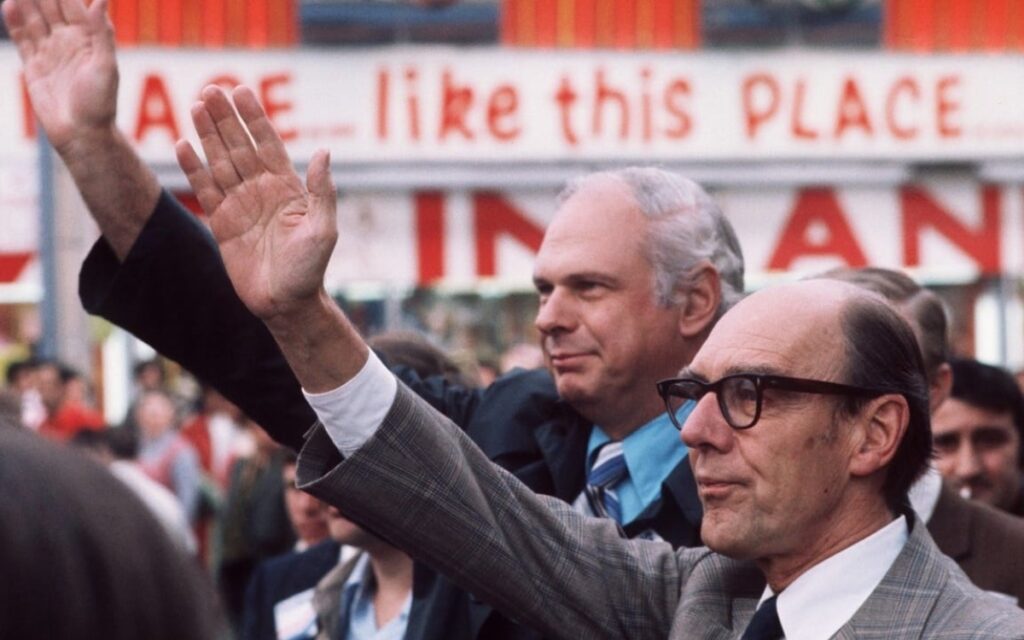 The contest saw incumbent Prime Minister Pierre Trudeau (not pictured) – expected to secure another majority – barely squeak by challenger Robert Stanfield (pictured, front-right). Only a few seats stood in the way of Stanfield’s Progressive Conservatives getting the chance to form government, which could have potentially ushered the elder Trudeau out of federal politics long before his contemplative “walk in the snow.” Photo credit: The Canadian Press

Of the 44 Canadian federal elections, a handful led to irreversible and remarkable changes in the direction of the nation. Many would argue the 1896 election of Canada’s first French Prime Minister Wilfrid Laurier is among these. Likely, most would cite 1968 and the genesis of Trudeaumania as another seminal election. Yet another example would be in 1988 when Brian Mulroney successfully argued the case for free trade with the United States. Historians suggest this set Canada in the direction of global trade, transforming our supply lines radically.

In a few days, the 50th anniversary of the 1972 federal election will take place. Though largely forgotten now, the campaign almost ended Pierre Trudeau’s political career. One can only speculate upon how different a Canada we would live in today if Trudeau had been ousted in 1972. Because economic conditions today brook some similarity, reminding ourselves of what happened 50 years ago this fall bears merit.

Issues central to the ‘72 campaign included unemployment, inflation, national unity, and bilingualism. The Trudeau government, since assuming power in 1968, had accelerated the accumulation of power in the Prime Minister’s Office, reducing parliamentary influence and raising the importance of the Prime Minister, his cabinet, and the ministries over which they ruled.

Trudeau’s exciting and triumphant campaign of 1968 led to a strong Liberal majority and expectations that in 1972 he would easily secure re-election. As many have observed over the decades, unpredictable issues can infuse a campaign and change its direction. Former British Prime Minister Harold Macmillan often replied when asked about the biggest challenge to his administration, “Events, my dear boy, events.” Events in 1972 almost swept Mr. Trudeau and his cabinet from office, thus revising the Canada of today.

Trudeau’s decision to delay the election call until the fall meant that both the US presidential election and Canadian federal election would take place just eight days apart. Interestingly, the campaign began in the middle of the famous 1972 Summit Series between Canadian hockey players and players from the old Soviet Union. As the match neared, Trudeau hoped that it might distract or diminish the bite of the struggling economy and increasing unemployment facing Canadians. He may have also hoped the election south of the border would drain attention away from his troubles. Whatever his motive, his bet almost turned into a blunder, costing him his office.

Trudeau’s opponent, former Nova Scotia premier Robert Stanfield, though portrayed as dour or bumbling, in fact, led a very effective and popular government in his home province. As leader for almost twenty years, Stanfield’s competence, good humour, and intelligence raised the moribund Conservative Party to power in 1956, a position he held until he ascended to national party leader at the famous 1967 convention which deposed former Prime Minister John Diefenbaker.

The 1968 election turned on Trudeau’s charisma and promise for a Just Society. Canadians also hoped he would defuse the troubles brewing in Confederation between Quebec and the rest of Canada. By 1972 other matters intervened and the electorate took a second look at Stanfield. Nonetheless, a Gallup poll, just two weeks before the election, gave the Liberals 44 per cent to the Conservatives 32 per cent. Ominously for the Liberals, the David Lewis led NDP had risen to 21 per cent. All still seemed in place for a second Trudeau majority. In an early version of the polls being biased, the Liberals support was significantly over-represented.

On election night, the shocking results found Stanfield’s Progressive Conservatives leading Trudeau’s Liberals 109 seats to 107 seats when most people turned off their TVs and went to bed. There were some outstanding races that had not been called because they were so close. In the morning a couple ridings shifted and the Liberals now claimed 109 seats to the Tories 107. The changing of a few votes would have given Stanfield and the Tories the right to form government and quite possibly the end of the Trudeau era.

If Trudeau had resigned, believing he could accomplish more in private life including raising a young family (he married Margaret Sinclair in 1971 and Justin was born on Christmas Day of the same year), a large contingent of Liberal cabinet ministers were ready to seek the leadership. Chief among these, John Turner, the young cabinet minister who had run for the leadership in 1968, looked the part and held more traditional business policy values than Trudeau. Assuming Stanfield led an efficient government, future election battles between Stanfield and Turner would argue over market-based solutions. While Stanfield may have had to seek out support from the NDP to form government, yielding to ideas like Petro Canada seem unlikely.

National unity, set on fire with the 1976 election of the Parti Quebecois in Quebec and in the West because of intrusive energy policies might never have happened under either Stanfield or Turner. The repatriation of the Constitution, one of Trudeau’s grandest schemes, resulted from the Quebec Referendum of 1980. Without Trudeau, there is no certainty that Rene Levesque ever wins power in Quebec. And if he had, there remains little evidence to suggest Stanfield or Turner had interest in turning Canada into a Constitutional petri dish.

Over his career as Prime Minister, Trudeau displayed a penchant for carelessly approaching issues which could create a great deal of trouble and then shrug his shoulders like Frank Drebin in The Naked Gun telling people to move along, “…there is nothing to see here.” He always overrated his ability to resolve these problems and underestimated the negative effects of his solutions. The “Great Diminisher” tagline fit no one better than Trudeau, when it suited his purpose.

A prospective government under the leadership of Robert Stanfield asserts several interesting outcomes. As suggested earlier, numerous problems which Trudeau authored would have been avoided or left dormant. On the flip side, Stanfield undoubtedly possessed the skill to better fiscally manage the budget. Implementing a compassionate conservatism and deploying a competent commitment to priorities for every day Canadians would replace Pierre the Pious Autocrat and return a more moderate and caring government to Ottawa. If one examines what Trudeau did after 1972, he largely followed this plan, using his wife Margaret to soften his image and create a kinder approach. Stanfield already practiced this in private life, and it stretches no boundaries to suggest he would have brought this to the PMO.

His personal governing philosophy as described in a Dalhousie University alumnus biography states, “As premier for 11 years, he introduced reforms that included increasing funding for schools and training colleges, designing the first form of Medicare in the province, and creating a provincial parks system.” Stanfield and Trudeau probably represent as great a breach in Canadian political public life between style and substance as exists in our 150 year history. Trudeau’s charm, celebrity, and charisma bore no relation to his accomplishments for the nation while Stanfield’s steady, reassuring, modest, and taciturn personality understated his ability to deliver.

While Trudeau over promised and under delivered, Stanfield displayed the character to do the opposite. Where Trudeau would react unpredictably (Quebec War Measures Act), Stanfield was measured, decent, and prudent. Trudeau’s willingness to misrepresent Stanfield bore no greater example than when mocking his suggestion about wage and price freezes in a later campaign. Trudeau eventually introduced the policies himself. Stanfield exhibited honour and honesty throughout his long public life. “Increasing the size of the GNP is important,” he told Maclean’s in a 1976 interview, “but it is not in itself a sufficient goal for a civilized society.”

Canadians will never know what a Stanfield government may have achieved, but as many pundits have assessed, and former Prime Minister Stephen Harper referred to at the dedication of Halifax’s Airport named in Stanfield’s honour, he was “the best Prime Minister we never had.” As Canadians contemplate the next election, perhaps they should consider 1972 and how a missed opportunity to replace a flamboyant and pretentious leader may have cost it a chance to install a man for all seasons, ready to serve, protect, and cloak the nation in honour and dignity – all qualities in short supply at the PMO these past several years.