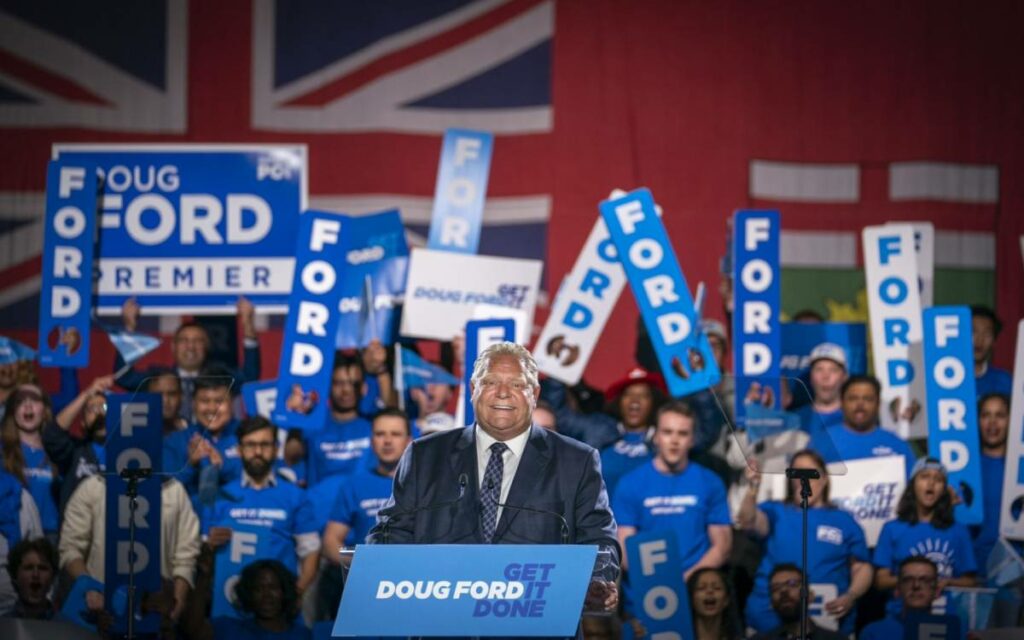 It was a rout. There is really no other way to describe the outcome of the Ontario election. As of the latest data, Doug Ford’s Progressive Conservatives have picked up 16 seats (from time of dissolution) to have a dominant total of 83 seats in a 124-seat legislature, well above the 63 seats needed for a majority. The NDP went from 38 seats to 31, retaining its Official Opposition status but with significantly fewer MPPs. Indeed, many of the Conservative gains came at the expense of the NDP, which is a rare occurrence. The Conservative victory was also quite geographically widespread, with good representation in all regions of the province.

As for the Liberals, they had a truly dismal showing. The Liberals were only able to add one seat to their pre-election number of seven after the party was decimated in 2018. Their new total of eight seats still does not give them official party status, with all of the added resources that confers, and will do nothing to stop them from continuing to be called the “minivan party” for some time to come. As a final indignity, Liberal leader Steven Del Duca failed to win his own seat, going down to the Conservative incumbent Michael Tibollo. Throughout the election campaign, even Liberals had pronounced themselves unimpressed with Del Duca’s performance.

As for the various smaller parties, the Greens failed to add to their previous seat count of one despite considerable effort on the part of Green Party Leader Mike Schreiner. The Greens saw the potential to double their seat count by a possible victory in the Parry Sound-Muskoka riding, and Schreiner spent considerable time there during the campaign, but the Conservative eventually prevailed in the riding.

The New Blue Party, comprised of disaffected former Conservatives, lost their one seat, which had been won under the Conservative banner in the previous election. The new Ontario Party also failed to win a seat, while candidate Bobbi Ann Brady won the Haldimand-Norfolk riding as an independent after being passed over by the Conservatives for the nomination.

The vote-rich 905 region was one key reason for the Conservative gains. It seems that issues of affordability, housing and transportation problems were dominant for this constituency, and neither the Liberals nor NDP campaigns addressed these issues adequately. The contentious 413 Highway ended up being a significant wedge issue that both Liberals and NDP attempted to use as a bludgeon, yet ended up working in the Conservatives’ favour.

Voter turnout was disappointing just below 45 per cent, the lowest ever for an Ontario election and down significantly from the 58 per cent turnout in the 2018 Ontario election. Low voter turnout is, however, an indication that there is no strong appetite for change among the electorate, and that was certainly borne out in the 2022 outcome. By way of comparison, voter turnout was 62 per cent in last year’s federal election, which was nevertheless near an historic low for a federal contest. Federal elections usually have a higher turnout than provincial elections on average, and municipal elections have the lowest turnout numbers of all.

Despite the many surprises in the election results, perhaps the biggest was that both Steven Del Duca and Andrea Horwath wasted no time in declaring they will step down from the leadership of their respective parties. Premier Ford will have an easy time for the next year or so while both main opposition parties are consumed with leadership contests. Given that Del Duca didn’t win his seat, the Liberals will be especially disadvantaged in the near term with a lame duck leader without a legislative presence and a tiny caucus. The fact that neither the NDP nor Liberals have any clear successors in the wings to replace Horwath or Del Duca is likely to make these leadership contests especially fractious.

This was a highly unusual election in many ways, and in the coming weeks and months the post-mortems are bound to be numerous and interesting. As usual when a Conservative wins, criticisms of the “first past the post” electoral system were rife even though we virtually never hear such criticisms when the Liberals or NDP win under the exact same system.

Whatever the nuances and odd elements of this election may have been, the bottom line is clear – the Conservatives successfully promoted a simple message that resonated with many Ontarians that, unlike in 2018, were not seeking major change. The Ford team ran a disciplined campaign that avoided the usual “bozo eruptions”, and benefitted from facing a weak Liberal leader and a tired NDP leader. It all came together in a resounding victory.

Considering all of the challenges Ontario currently faces, however, the hard part is just beginning.