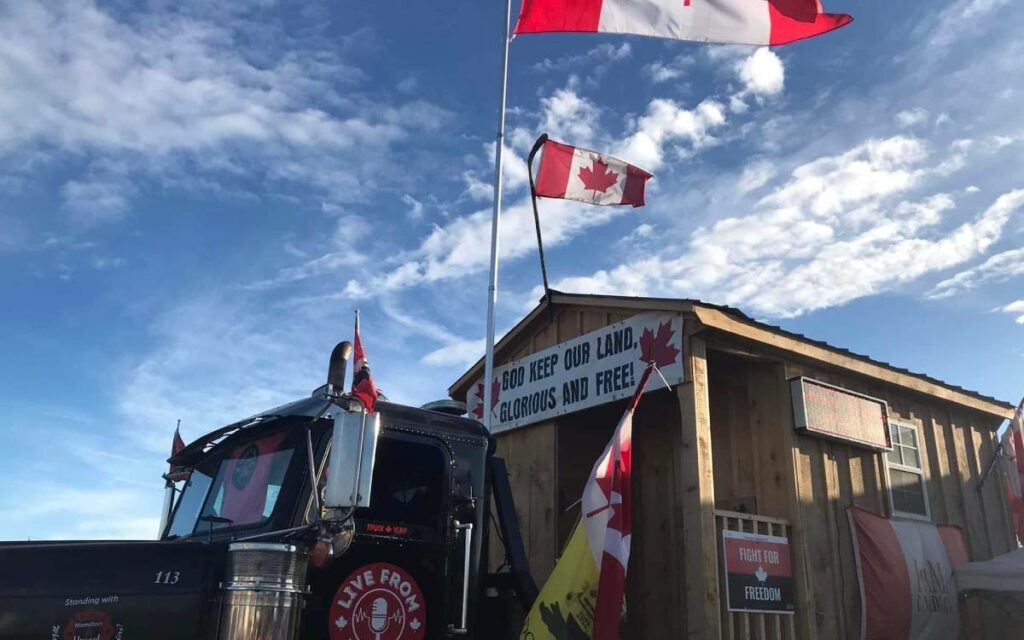 The ‘Live from the Shed’ transport truck arrives at the Niagara Regional Exhibition in Welland over the weekend. Photo credit: Rosa Stewperian

The Niagara Regional Exhibition grounds in Welland played host to the Freedom Tour’s “Unity Truck Show” this past Friday and Saturday.

With little promotion beyond social media and the tour’s website, the event attracted over 1,000 people including families, cars and trucks. Several weekend convoy groups from around the province made the trip to Welland for the festivities.

The event featured several speakers who participated in the original Ottawa trucker protest back in January and February, some of whom even experienced truck seizure, bank account freezing, and arrest.

Prior to the event, the Niagara Regional Exhibition board took the unusual step of publicly declaring that renting the grounds to the Freedom Tour did not mean that it endorsed the opinions or beliefs of the organization or any of the presenters. It was an unusual step because the board has not made that kind of statement about any other group that has rented the grounds in the past.

On the fun side of things, families and friends took part in a variety of activities, including family Zumba, music, games, face painting and bouncy castles. The commercial side included a dozen vendors and typical fairground food from pizza and fries to Freedom Grill hot dogs and hamburgers.

Big rigs from Niagara-based trucking company Jonker Trucking Inc. – whose trucks were seized in Ottawa – were present. Also on site was the high lift mobile crane that was parked on Wellington Street in Ottawa during the winter protests. The crane flew the Canadian flag alongside the American flag received at the Niagara Falls flag exchange event with a U.S. convoy group at the center of the Rainbow Bridge last month.

The event was billed as a “Unity Truck Show” because national unity in defence of freedom was a theme of the speakers.

Karen Hilts is one of the organizers of Niagara Local 10-4. Hiltz told The Niagara Independent that while the group did not organize last weekend’s event, it did coordinate with several other “Freedom Through Unity” convoys from Peterborough, Barrie, London, Hamilton, Pickering and Brantford to meet in St. Catharines and “convoy” into Welland and participate in the Unity Truck Show.

Vince Gircys, a retired OPP officer who is currently running as the Ontario Party candidate in Niagara Centre, was one of the speakers at the event.

Speaking to The Niagara Independent, Gircys emphasized the unity message of the event: unity behind defending the freedoms in the Canadian Bill of Rights, Charter of Rights and Freedoms, and the Constitution of 1982. According to Gircys, they all ensure bodily autonomy of the Canadian citizen, including, notably, the right to refuse a vaccine without undue penalty.

The event went off without a hint of trouble, no police calls, no significant or sustained police presence, and no counter protest. At the end of the day, it was more of a festival than a protest; a freedom fair much like a fall fair on the exhibition grounds.

The Freedom Tour has events planned for the next few weeks in New Liskeard and Ottawa. Previous events including the Niagara Falls flag exchange, and rallies in Powassan, North Bay, New Liskeard, and Ottawa saw little mainstream media coverage, but they happened, successfully and without trouble.